The move by cross-party politicians to overturn NSW’s outdated abortion laws is a cause for celebration, action and unity.

As a doctor working in reproductive and sexual health for almost 20 years, I have cared for countless women seeking an abortion following an unintended pregnancy or a devastating diagnosis for a much-wanted pregnancy. They have come from all walks of life, including teenagers at school, women in their 40s with grown children, or women living in refuges, working on farms or in legal firms. 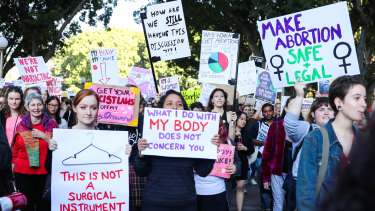 Protesters in Sydney last month … an abortion reform bill with multi-party support will be introduced this week.Credit:Edwina Pickles

All have had to navigate a health system that has criminalised their choices based on 119-year-old laws.

The current laws pose a threat of criminal prosecution to women and doctors and serve as a deterrent to doctors providing services. This system all too often can lead to feelings of shame, isolation and stigma – made even worse for women with financial stresses or the need to travel to a city clinic from a country town.

Burdening women in this way dates from a time when women had no rights over choices about their bodies. It is completely out of step with today’s approach to medicine which places individuals’ needs and desires at the centre of healthcare.

Modern abortion care, including the introduction of medical abortion in 2012, has come a long way.  Current abortion care is based on evidence-based advances endorsed by institutions such as the World Health Organisation and the Royal Australian and New Zealand College of Obstetricians and Gynaecologists. Abortion is healthcare and it must be treated as such.

In May this year, the NSW Pro-Choice Alliance announced a sustained campaign to end the criminalisation of abortion, and this week the Reproductive Health Care Reform Bill 2019 will be brought to the NSW Parliament.

This move comes with support from the 70 per cent of NSW residents who have said they are ready to see abortion decriminalised, a collective of more than 70 key health, legal, women’s and domestic violence organisations, and from across the political spectrum.

I can sense the relief this news will bring to colleagues who have devoted careers to improving women’s health, and to the women I have been privileged to encounter who have had an abortion themselves and who want to ensure those who require this service in the future can do so with dignity rather than shame.

There is no doubt in my mind that abortion should be treated like any other area of healthcare and be decriminalised. NSW needs to move rapidly to embrace moves to overturn its 119-year-old laws.