Having a friendly doctor could halve the risk of a diabetic dying within the next 10 years, research suggests.

Patients who feel their GP is empathetic may be more inclined to take their doctors’ advice and adhere to their medication, researchers at Cambridge University claim.

Empathy is said to lead to a trusting relationship where patients can talk openly about any problems that need to be addressed. 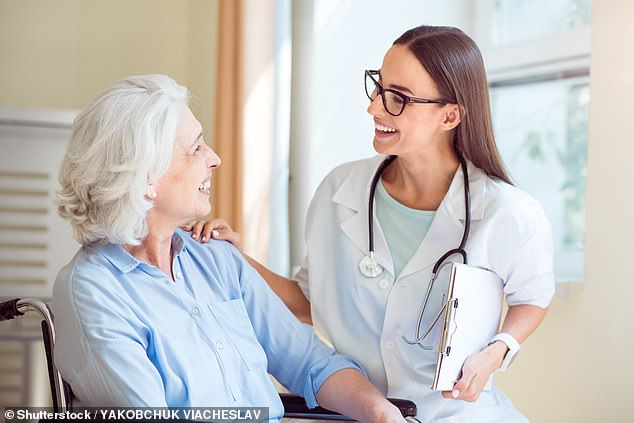 Study author and GP Dr Hajira Dambha-Miller said: ‘Our findings suggest that these more human elements of healthcare early in the course of diabetes, may be important in their long-term health outcomes.

‘The potential impact is considerable and is comparable to prescribing medicines but without the associated problems of side effects or non-adherence.’

Type 2 diabetes affects around four million people in the UK.

It significantly raises a patient’s risk of death from heart disease or stroke due to the strain high blood glucose levels put on arteries. However, these complications can be avoided with proper disease control.

The researchers analysed the health outcomes of 628 individuals across 49 general practices in the UK.

Patients completed a questionnaire that assessed their GP’s empathy, as well as their ‘experiences’ of diabetes, a year after being diagnosed.

Scores were divided into three groups that assessed GP and nurse empathy relative to a patient developing cardiovascular disease or dying over a 10-year follow-up.

WHAT IS DIABETES AND WHY DOES IT AFFECT THE HEART?

Type 2 diabetes is a condition which causes a person’s blood sugar to get too high.

More than 4million people in the UK are thought to have some form of diabetes.

Type 2 diabetes is associated with being overweight and you may be more likely to get it if it’s in the family.

The condition means the body does not react properly to insulin – the hormone which controls absorption of sugar into the blood – and cannot properly regulate sugar glucose levels in the blood.

Excess fat in the liver increases the risk of developing type 2 diabetes as the buildup makes it harder to control glucose levels, and also makes the body more resistant to insulin.

Weight loss is the key to reducing liver fat and getting symptoms under control.

Type 2 diabetes comes with many short- and long-term complications which can be avoided by maintaining good blood glucose control.

It can lead to more serious problems with nerves, vision and the heart.

The large blood vessels can be blocked with a build up of plaque, caused by high blood glucose, potentially leading to a heart attack, stroke or clot in the legs.

It’s recommended that people with diabetes don’t smoke and keep their blood pressure and cholesterol under control.

Just under one in five (19 per cent) of the patients went on to experience a cardiovascular disease event.

And a similar number (21 per cent) died from causes such as cancer or heart attacks.

Those that experienced better empathy tended to have a lower risk of cardiovascular disease events, however, this was not statistically significant.

Those who reported having an empathetic doctor had a 40-to-50 per cent lower risk of death over the next decade compared to those who had a less friendly medic.

The team said there are several possible explanations for the findings, which were published in the journal Annals of Family Medicine.

GPs who are empathetic may be more likely to successfully get their patients to take medication or commit to exercise.

Practitioner empathy may also reflect the doctor’s listening ability and the trust of the patient in disclosing what is really wrong.

This can then lead to them being treated correctly.

The findings build on previous research that shows patients with a lower level of anxiety or an optimistic outlook are more likely to live longer.

Medics are given training on the importance of empathising with their patients, which is reinforced in codes of practice.

Optimising diabetes management is a public-health priority given the growing prevalence of the disease.

The life-long condition is estimated to cost the UK more than £9billion ($11.2bn) annually – 10 per cent of the NHS’ budget.

According to the charity HEART UK, adults with diabetes are two-to-four times more likely to die from heart disease than those without the condition.

At least 68 per cent of over 65s with diabetes die from some form of heart disease. and 16 per cent die of stroke, statistics show.

Dr Dambha-Miller added: ‘In trying to manage the growing burden of chronic preventable disease, we’re increasingly moving towards precision healthcare, target-driven care and technology-based assessment, while at the same time focusing less on the human, interpersonal empathic aspects of care.’