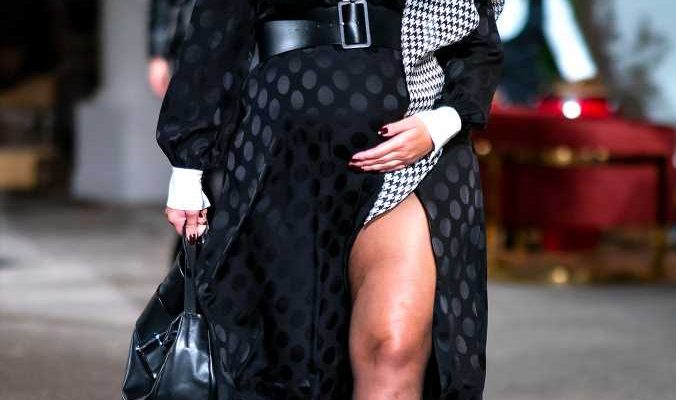 Anything you can do, these models can do pregnant

The mom-to-be showed off her pregnancy glow in the Tommy Hilfiger x Zendaya show at New York Fashion Week 2019.

Aldridge posted a photo of herself on the runway thanking the designer, saying: “So proud to walk the @brandonmaxwell runway 5 months pregnant! I’ve walked few runways in my life and this is a moment that I’ll look back on forever with great emotion. Thank you Brandon for letting my shine & being such a true gentleman, Love you FOREVER!!!”

Her pregnant walk down the runway in 2018 wasn’t the first time Aldridge had strut her stuff with a baby on board: in 2011, Aldridge walked in the Victoria’s Secret Fashion Show and confirmed that she was expecting one month later.

Medics were called and the model welcomed a baby boy at a nearby hospital.

She posted a photo of herself rocking the runway and said, “A lewk, 14 hours of labor, and A king is born. This is the face of a WOMAN IN LABOR, we hold s— down most of us don’t even know how much we’re going through, I’m here to say I CAN DO WHATEVER THE F— I WANT WHENEVER THE F— I WANT AND SO CAN YOU.”

The Russian model — who recently split with Bradley Cooper — walked in her first-ever Victoria’s Secret Fashion Show in 2016 while in her second trimester.

In 2016, Ward walked in David Jones’s spring show while 15 weeks pregnant with her second child.

Wheeler took to Instagram after walking in the Temperley London show in 2015 to tell her followers: “No, I’m not bloated I am PREGNANT!! ???”

Balti’s pregnancy glow was her best accessory when she walked in a fall/winter Dolce & Gabbana show while pregnant with her second child.

Kerr was five months pregnant with her first son, Flynn, when she hit the Balenciaga spring 2011 runway.

Ambrosio is Victoria’s Secret royalty, so when she got pregnant before the 2011 VS Fashion Show, she worried.

“When I first found out I was pregnant I thought, ‘Oh my gosh I don’t think I’m going to be able to walk on the show,’ ” Ambrosio said. The model decided to keep her pregnancy a secret and ended up walking the runway while four months pregnant.

A few months later, she would show off her baby bump as she hit the catwalk for the Colcci Show at Sao Paulo Fashion Week in January 2012.

Dunn was almost eight months pregnant when she walked the runway for Jean Paul Gaultier’s Sping/Summer show in 2010.