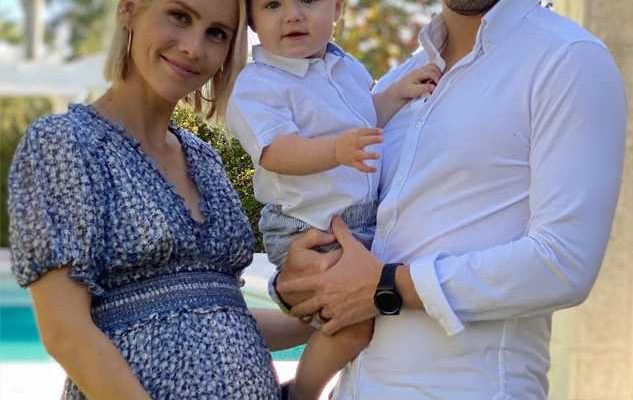 James is getting a baby brother or sister!

The 1-year-old son of Claire Holt and Andrew Joblon joined his parents in a photo announcing their second child on the way Friday, which saw the soon-to-be family of four smiling for the camera.

Holt, 31, is wearing a blue patterned dress, cradling her baby bump with one hand while her other rests on her husband, who is holding little James.

“Grateful for this little ray sunshine in an uncertain time ❤️,” The Originals actress captioned her reveal, no doubt referencing the ongoing coronavirus pandemic.

Holt and Joblon, a real-estate executive, got married in August 2018 after he popped the question the previous year.

In March 2018, Holt revealed that she had suffered a miscarriage, detailing her loss and consequent dilation and curettage procedure — plus the emotional toll it took on her — in an Instagram post, which featured a photo taken from her hospital bed ahead of the surgery.

The actress went on to speak to Mini magazine for the cover of their spring 2019 issue, where she discussed her second pregnancy and admitted that she “felt broken and ashamed” after her previous loss: “Because I experienced such intense grief, I found it very difficult to process things and move on.”

“The miscarriage was the most difficult thing I had ever faced, but it brought my husband and I so much closer and we have really grown as a result of it,” Holt said. “We are also so much more grateful for the little boy we are about to welcome into our lives.”

Since James’ birth, Holt has been open about some of the more difficult parts of new motherhood, including with breastfeeding — and fellow celeb moms like Miranda Kerr and Jamie-Lynn Sigler chimed in with messages of support on her corresponding April 2019 post.

“I gave myself two days off in the first week so I wouldn’t be scared and sad every time she woke up to feed,” Amanda Seyfried wrote of her daughter, who was 2 at the time. “And it helped so much. No guilt. Just pump and bottle. And then did both throughout. Less pressure. You’re not alone.”

Holt recently celebrated James’ first birthday on March 28, captioning a photo of herself with her smiley son, “My baby is 1!! Pretty cool that you can grow your own best friend. It’s been the shortest/longest, most epic year of my life. Shout-out to my legendary teammate @ajoblon. It’s all super easy from here, right??”

“My world ❤️,” Joblon wrote in the comments. “Keeping me grateful and thankful in these trying times.”