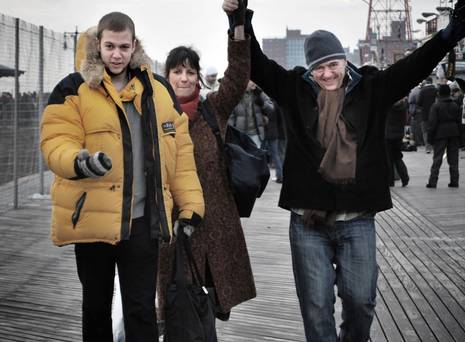 It’s something that no parent ever wants to think about, never mind experience. When film makers Jane Harris and Jimmy Edmonds lost their son Josh (22) they were plunged deep into grief. Their way through it was to make a film that shines a spotlight on parental bereavement.

The Irish Hospice Foundation are bringing the film, A Love That Never Dies and its makers to Dublin for its Irish premiere later this week, hoping to spark a conversation about something that is rarely talked about because most of us don’t know what to say to parents who have lost a child.

Making the film took Jane and Jimmy and their children, Joe (40) and Rosa (25), to Vietnam to visit the place where Josh was killed in a road accident in 2011. Jane says it was important that she look around and see the last things he might have seen.

Photos and film footage of Josh first as a baby and a toddler, then a gangly teenager and later as a young man making his way in the world are interspersed with Jane and Jimmy talking about how they travelled in search of what their son’s death means. That journey also took them in search of other people whose children had died.

As a parent it’s not easy or comfortable to watch and you do so with a growing sense of dread. Bearing witness to the grief of those whose children have died is heart wrenching.

But it’s also hopeful. Jane talks about how much stronger she is because of Josh. Other parents speak of finding ways to honour their child, of coping and of living a full life again when they thought they could not.

Jane and Jimmy, who first met at film school, founded The Good Grief Project following Josh’s death to help people like themselves move forward in an active and creative way through grief using tools like creative writing and photography. A Love That Never Dies is part of their response to Josh’s death and it is as much a story about love as it is an exploration of grief.

Speaking from her home in Gloucestershire, Jane – a psychotherapist – says the work she and Jimmy do is all about finding a language for grief that’s hopeful and positive. “It’s trying to overcome the silence and the stigma. Grief changes you – you learn from it,” she says.

She also believes some of the language around grief in words like “closure” as well as societal expectations of a time frame in which the bereaved person moves on are unhelpful.

“There shouldn’t be a time frame around healing. You don’t ‘get over it’. The more you love, the more you hurt. You can’t get around sadness – you have to go through it. We’re saying let’s be brave and strong and let’s allow people to be open. Let’s not apply rules”.

While she says she will always grieve for her son, Jane says she is also satisfied and happy in lots of ways in her life. “I know more than ever before what’s important. It’s helped me become a much better therapist. I know you can’t fix this kind of pain. You have to be alongside people courageously and not try to fix it or come up with clichés”.

Striking at the loneliness that bereaved parents feel because the subject isn’t talked about was also important, she explains.

“We felt we had to step up to this subject once and for all and encourage people to be honest. We’re not saying it’s for fixing but it is about communicating. We want people to talk to us wherever they are,” says Jane.

And it’s her hope that the film she and Jimmy have made will be shared in big cinemas and not be marginalised. “We want people to ask us questions. We’re not afraid any more – we found the courage. What Josh has taught us is what’s important and that is being honest and open about the things that really matter,” says Jane.

When her daughter Rachel died of brain tumour at the age of five in 2004, Sharon says she didn’t know how her family would cope. “The loneliness is indescribable even in a room full of people. You just want your child back,” she says.

“I couldn’t be the person I was before – that person was gone. Up until then we were at our happiest. I didn’t know it at the time,” says Sharon who is mum to two, Dylan and Joyce, now in their 20s.

After realising the lack of support and services for bereaved parents, she and her husband Aidan along with a small group of other parents set up Anam Cara.

“These children leave a legacy and Anam Cara is about that legacy. Parents come to meet other parents. Eventually people get stronger – they grow around their grief,” she says.

“Rachel is still a huge part of our lives. I still have a relationship with Rachel. It’s a relationship I carry within me. I live my life now for the both of us.

“What I know now is love is way stronger than grief. The love is stronger if you let it come through.

“That’s why it’s so important to connect with organisations like us. We are not a counselling organisation – what we offer is a safe and comfortable place where parents can come,” says Sharon.

Dr Susan Delaney, a clinical psychologist and bereavement consultant with the Irish Hospice Foundation, says even thinking about the death of a child leaves us feeling anxious. However, she says parents who have lost a child need people to show up in common humanity and try to help those who are grieving.

“Please don’t isolate bereaved parents. It doesn’t matter if you don’t have the words. What words are there? You’re not going to say anything that’s going to make it alright. You can say, ‘How can I help you?’ You can make a meal or pick up children. But don’t ever feel it’s better to say nothing or feel it’s too late. It’s never too late,” says Dr Delaney.

She explains that out of all bereavements, being bereaved of a child is a risk factor for getting stuck in your grief. “People have different coping skills. Some people find their way with the help of family and friends. Some find it difficult – those are the people we need to target for intervention,” she says.

However, Dr Delaney says while it’s not about ‘getting over it’ or ‘moving on’ it’s important to acknowledge that we are hard wired to heal from grief.

“Finding a meaningful life and finding joy in your life is not mutually exclusive to missing your child. We know that grief reshapes to where you can remember your child with love rather than with pain”.

Giving a voice to bereaved parents, letting them know there are services available to them and allowing them to hear from people who share their story and struggle are all important in terms of healing, she says.

Dr Delaney says Jane and Jimmy’s film is about a message of hope and joy. And she says while we talk about broken bones mending, people should know that broken hearts also heal.

Jane and Jimmy will attend the Dublin premiere of A Love That Never Dies this Thursday at the Odeon Point Square cinema at the Point Village and audience members can participate in a Q&A afterwards. While the showing is sold out, the film is available on Amazon or Vimeo. See thegoodgriefproject.co.uk for more