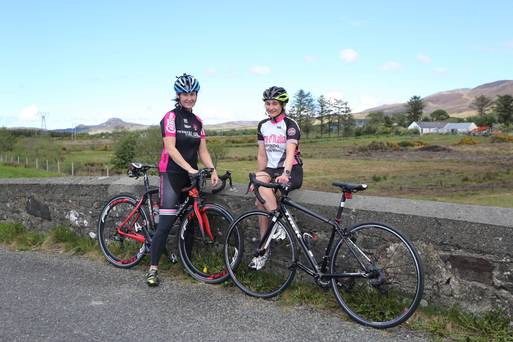 When Siobhan Kenny crossed the finish line after completing a gruelling Ironman challenge, her daughter Molly Dunlop burst into tears.

Molly had been following her mum’s progress in the 2016 Barcelona Ironman online and had been watching her mum’s times as she completed her 3.8k swim, 180k bike ride and 42k run.

When Molly participated in her first triathlon earlier this month, it was Siobhan’s turn to shed the tears as she watched her daughter complete her first sprint distance event of a 750m swim, a 20k bike ride and 5k run.

A growing body of research supports the idea that if a parent is active in sports, their children are likely to follow suit. And sport has been part of the Kenny family’s life for as long as Siobhan can remember. A physiotherapist working for the HSE in Carndonagh, Co Donegal, Siobhan ran and played hockey at a senior level through school at Dominican College Taylor’s Hill in Galway City.

When her children Molly (17) and Oisín (11) came along, Siobhan says she always tried to be as fit and active as she could be, although she admits that in the early years of motherhood, it was difficult to fit everything in.

From their home in Buncrana on the Inishowen Peninsula in Co Donegal, mum and daughter travel to their triathlon club swimming sessions together during the week. Siobhan is currently in training for her second Ironman competition in Barcelona in October and Molly plans to take on three sprint distance triathlons this summer.

“I try to fit my training in around everybody else. You’re a mum and you’re trying to keep up with the house and the cooking. Training is the easy bit because you have to do a run – but also cook the dinner. Sometimes when I look at the ironing pile I think something’s got to give,” says Siobhan. “Whether it was conscious or not, the kids always saw me doing stuff like going for a run. I’d always have encouraged them to take part in sport without being too pushy. You can’t push it on them if they’re not enjoying it. Both Paul, their dad, and I are quite sporty and the kids would’ve seen us doing stuff. I don’t know if it was leading by example but they got the message that this was something we liked doing,”

Siobhan says it was important for her to set herself goals and to have something to work towards. “I would try to instil that in the kids. I’m a firm believer that if you put your mind to something, you’ll find a way. When I was training for my first marathon in 2012 and I needed to get out of the house for an hour, I would have got a babysitter in so I couldn’t make the excuse I couldn’t get out. That’s where logistics come into it and you do have to be organised,” she says.

“When you exercise you feel better – it’s like mindfulness and I think it’s important for a parent to have something. I think Molly saw that and she saw the social side of it as well. I would often meet a friend to run or meet up for coffee with friends afterwards. You meet great people when you’re doing stuff and friendships form with like-minded people. Molly met those people too and they’re great women,” says Siobhan.

“Molly’s always had strong female role models in her life, not necessarily just me. My cousin Louise did an extreme triathlon last year and Molly and I went to support her. Molly was meeting all those people and travelling to events. She loved it,” says Siobhan.

“When Molly did her first triathlon earlier this month I was more nervous than her but she had a smile on her face the whole time. She’s a fabulous swimmer – I’d love to be able to swim like her – but the main thing is she enjoys it. I don’t push her. Molly is very independent. I think she loves the sporting environment. Some nights I’ll say, ‘I don’t want to go swimming’ and Molly will say, ‘Come on Mum’. She’s as encouraging to me now,” says Siobhan.

Molly, who did her Leaving Cert last year and is going to college to study science in September, has already checked out the training times of the triathlon club at NUI Galway where she’ll be studying.

She credits her sport with helping her through the Leaving Cert. “I loved PE in school. I was the only girl who did PE after third year when it wasn’t mandatory. For me it’s about mental wellbeing too. When I was studying I’d need to be moving. My mum would see me walking around in circles,” says Molly.

“I learned to swim when I was four and then I joined a swimming club in Buncrana. I joined the junior section of North West Triathlon Club when I was 12 or 13 and I loved it. I would’ve been shy and Mammy would say ‘Try this – you’ll enjoy it’ or ‘You’ll meet new people’. She’d never push me to do anything. I’m quite headstrong and I don’t like to say that people influence me but my family is so active so it does help,” she says.

“When we go to our swim sessions together, that’s our thing. In the car it’s my time to chat to Mammy on the way up and down the road. I loved every second of my triathlon this month. I was really nervous but Mammy was more nervous than me.

“I hope sport will always be in my life. A lot of my friends have given up – there’s too much to do. I stopped training for a while when I was injured but I don’t like being unfit. Exercise is reassuring for me. Sometimes I feel I can’t do something and then once you have a good session you realise you can.

“My good friends know I’ll work around my training to see them. I don’t mind getting up early. I got up at 5am recently to go for a run so I could go to Dublin with my friends. It’s made me more disciplined and helped me structure studying for the Leaving Cert,” says Molly. Her mum says this is a special time for the two of them and it’s great to see Molly take part in her own sporting challenges. “I do look at her and think, ‘Wow, you’re amazing’.”