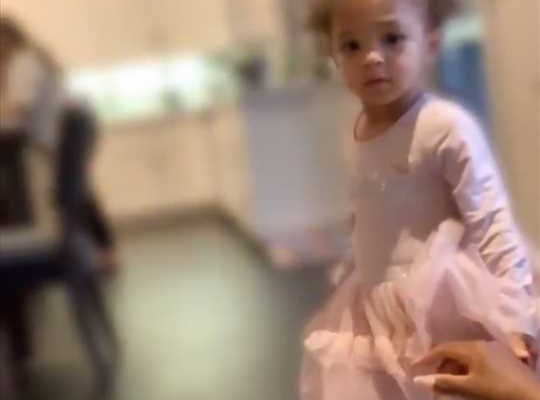 In the selfie-style footage, Williams, 38, recorded little Olympia — who’s too cute in a long-sleeved pink tutu-style outfit, complete with a pattern of hearts, stars and a gold crown on the front — as the toddler said, “Mama, Mama, Mama,” and pulled on the athlete’s arm.

“Come on,” Olympia requested, prompting her mother to ask, “Where you taking me?”

The little girl eventually gave up, hilariously dropping Williams’ hand and exiting the frame after throwing one last inquisitive look at the camera.

Pink has certainly been one of Olympia’s wardrobe colors of choice as of late, albeit in differing shades.

The youngster twinned with her mama last month in coordinating hot-pink one-piece swimsuits, where they made the perfect summery pair in a snapshot Williams shared to Instagram.

Standing behind little Olympia with her hand on her hip, the athlete flashed a big smile at the camera while her suit proclaimed, “THE SHADY ONE.”

Meanwhile, Olympia — looking a little unsure about the photo op, and more serious than Williams — wore a bathing suit in the exact same shade that read “WILD CHILD,” in white lettering that perfectly matched her mom’s.

Both the tennis pro and Ohanian, 36, joined Olympia and others at the newly opened Star Wars: Galaxy’s Edge area inside the Disney’s Hollywood Studios park for an afternoon of fun that included a visit to Oga’s Cantina around 7 p.m., a source told PEOPLE.

Williams said in an interview with the park that it was her little girl’s “first trip to Walt Disney World and being a crazy Disney World fan, I’ve literally been waiting on this moment since I was pregnant.”

“The last time I came to Walt Disney World in Florida, I was actually pregnant with her,” the tennis star added in her video interview. “I’ve been waiting so long. I haven’t been able to come back, so this is like a dream come true.”