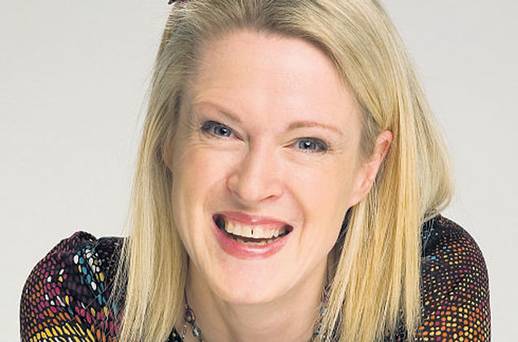 The next big campaign which the Irish government needs to roll out, after tackling sugar consumption and healthy eating, is encouraging children to switch off their screens, an award-winning children’s author has said.

Sarah Webb, who has written 11 children’s books, says children who don’t like to read traditional text books need to be encouraged to switch off their screens and find joy in other forms like comic books, graphic novels, poetry and performance poetry online.

“I’m waiting for the government to take a lead and act on it. The research is there to show that children do not benefit from constant screen time. There are other ways of learning, and as adults we have to step up and do something about it, the same way we need to step up about climate change.”

She added: “There are interesting statistics about screens versus paper. There’s been research going on in Norway in a place called Stavanger, where they’re very interested in looking at the issue of children’s screens and concentration levels.” “When children read on a screen, they’re always looking to move along or for something to happen – their synapses are being over sparked.”

“I’ve always been against children reading textbooks on screens; it’s why you’ll find that children will print out the texts that they read on screens so that they can highlight them around exam time.”

A spokesperson for the Department of Children and Youth Affairs said a whole-of-government strategy for babies, young children and their families, published in November 2018, includes a action to develop, publish and disseminate guidelines on health behaviours for babies and young children including Guidelines on Screen Time for Early Childhood.

“This action is being led by the Department of Health. The implementation plan for ‘First 5’ is currently being developed and will be published in May which will set out further detail on how and when each of the actions will be implemented.”

In 2017, a major study by the Progress in International Reading Literacy Study (Pirls) found Irish children to have the best reading skills in Europe.

Webb, who visits schools every week and runs five writing clubs with different age groups, says every child has their own story to tell. This week she launched Scéal Eile, a creative writing competition rooted in primary and secondary school students’ love of books.

Scéal Eile will see students from all levels revisiting some of their all-time favourite books with the task of creating their own alternative storyline or ending. Students from junior infants right through to sixth year are encouraged to take their favourite stories or beloved characters on a whole new adventure, creating a direction they’ve always wanted to see in their favourite books.

“They definitely have stories in them; I always start with poetry and short stories [in creative writing groups]. There are different ways to tell a story. Some might want to tell it as a graphic novel or a comic, or another form.”

“Some are very able to pull a story out of their heads; other children and adults, they tend to need a prompt or a little bit more encouragement.”

“Funny enough, they’re more interested in writing about dragons [not phones and technology] – they do like writing about robots – but it’s funny, technology does not play a huge part in their creative writing. Maybe they want to get away from that when they’re writing. The younger ones love creating zombies and mythical animals.”

Webb, who has three children aged 24, 15, and 12, says classics like Wuthering Heights, To Kill A Mocking Bird, and Shakespeare’s works have all been published in comic format, which can feel more attractive for some teenagers like her own.

“They all still read, they all read comic books, none of them read texty books. They love comic books. One is dyslexic and the others just read Manga, or Shakespeare in comic book form, which is fascinating.”

“A lot of the language is the same, it’s just in comic book form.”

“My son is 12 and he’s just read one called Maus and it’s all about world war II and the Germans are portrayed as cats and the Jews as mice, and it’s absolutely fascinating.”

She added: “I don’t think traditional reading is for everyone.”

Allowing children time to be bored and let their imagination flow can do wonders for their creativity, she adds.

“If you leave children in a room with a paper and a pen and pencils, they’ll draw or come up with a story. It’s really important that we don’t overstuff their lives, and our lives too in fact.”

“People are born with an innate imagination and as we get older, we don’t allow our imagination to come through as much, we’re always on Netflix or on our phone and on social media; we don’t allow our brains just to settle. In order to be creative, you need time to think and let your thoughts come through. I’m guilty of it, I walk with podcasts now, but sometimes I make myself leave my phone at home and just go for a long walk with the dog.”

There’s never been a better time to use a library, Webb added. On New Year’s Day, all charges on library members accounts were removed as part of a strategy to almost double active library membership by the end of 2022.

“It is a fantastic move by libraries; they’re very forward thinking which is great. They have 3D printers, gaming clubs as well as book clubs. Libraries are a fantastic resource for children; they’re vital and they’ve really stepped into that role.”

“Where I live, the Dun Laoghaire library has really become a creative hub. There’s no shushing anymore. And there are also relax events, if a child has an extra need or autism, they’re welcomed in, there’s no attitude of ‘this is a quiet space for quiet people’. That’s the latest push – to make libraries truly inclusive.”

Now online at www.anpostschoolbag.ie, the An Post Education Awards is in its 35th year promoting literacy and learning for generations of Irish students.