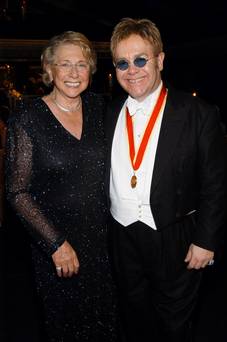 As far as the world was concerned, Elton John and David Furnish were the picture of married bliss on their wedding day back in 2005. Flanked by celebrities and with a throng of well-wishers lining the Windsor streets, no stone was left unturned and no expense spared as the couple celebrated the happiest day of their lives. In a new autobiography, he lifts the lid on his tumultuous relationship with his mum Sheila, noting how she became a ‘raving sociopath’, intent on ruining his big day.

“Oh, great,” he writes. “The most important day of my life and one of Mum’s moods appeared to be upon us, the ones I’d lived in terror of when I was young.

“When David and I exchanged our vows, she started talking, very loudly, over the top of us: rattling on about how she didn’t like the venue and couldn’t imagine getting married in a place like this.”

If you were a generous sort, you could probably put this down to the actions of your typical meddling mother-in-law.

Yet according to Elton, her actions ran much deeper than that. Later, he found out that she had tried her best to stop the marriage going ahead to begin with.

The toxic mother-son relationship was explored in the recent biopic Rocketman, but Elton himself has pulled no punches on his feeling towards Sheila, who died aged 92 in 2017.

Sheila was no stranger to walking her famous son up the red carpet, and the two always put on a great show of togetherness.

But they were estranged for years: in 2015, she hired an Elton John impersonator for her 90th birthday and offered an excoriating interview to a newspaper: “He had always been very kind to me until he got with David Furnish,” she noted.

It’s not the first time that a toxic parent-child relationship has been committed to print. Famously, Mommie Dearest, written by Christina Crawford, revealed actress Joan Crawford to be a typical narcissist, in Hollywood and at home.

Many will recall searing passages of physical and mental abuse in Christina’s version of their relationship.

Ironically, Crawford is known for her explosive feud with Bette Davis, but toxic parenting skills appears to be the one thing they had in common, if a memoir by the latter’s daughter is anything to go by. BD Hyman described Davis as a typically abusive, bullying and self-centred mother.

All of these mothers appear to display the typical hallmarks of narcissistic parenting.

“It’s much more common than you think,” notes author and psychotherapist Stella O’Malley. “There are more narcissistic parents out there than any of us realise.

“You’ll often see it on the big days, as happened with Elton: wedding days, exam days, birthdays, or even the birth of a grandchild, where it becomes all about the parent.”

It stands to reason: some American research puts the figure of those diagnosed with narcissistic personality disorder (NPD) at around 6pc. Yet NPD aside, there’s no doubting that social media, selfie culture and a general move towards performative parenting has created a situation where children are often tasked with being a shining reflection of their parents.

“Performative parenting is so insidious and pernicious and ultimately damaging for all of us,” observes O’Malley. “It’s very hard to treat NPD because it can be hard for people to care about being treated. On the other hand, a lot of people have become narcissistic, as in the adjective.”

As to when to pinpoint that one’s narcissism might be problematic as a parent, O’Malley adds: “You often aren’t able to, but at some point you’ll be blindly defending yourself, The people around you will be saying it to you soon, and there’s a chance you will react intensely. That’s a real sign that it’s gotten out of control.”

Adds psychologist Aisling Leonard-Curtin: “If your child brings back an average school report card, or doesn’t get on the soccer team or in a school play, and you talk to them about what that means to you as a parent, that could be a sign. It’s natural for parents to see their children as a reflection of themselves, but if it’s happening on a constant basis, there’s a chance that narcissism is at play.”

A narcissistic parent appears to care more about keeping up appearances and the veneer of perfection rather than providing real motherly support and guidance. Narcissists see their children as extensions of themselves, barely thinking about respecting their child’s boundaries or acknowledge them as people in their own right.

Even more intriguingly, narcissistic parents attempt to compete with their children, and often get envious or jealous when their child ‘overtakes’ them.

“The winner-loser dynamic is at the heart of extreme narcissism, and the narcissistic parent is somebody who plays that game through their children,” explains psychologist Joseph Burgo, author of the book The Narcissist You Know: Defending Yourself In An All-About-Me Age.

“They are the ones who are driven to create children who are winners, and not only are they winners but they’re better than other people’s kids.”

More often than not, the children of narcissistic parents have been led to believe that they are the crazy, imbalanced and negative ones, instead of their parents. They also only felt loved by their parent when they did exactly what that parent wanted.

And, because the parent liked to present a perfect family image to those outside the home, it’s not unusual for these children to feel as though they’re being occasionally gaslighted at times.

And yet, according to psychologist Aisling, it’s not necessarily a relationship devoid of real love: “Narcissistic parents do love their children, but it can be hard to see this love. These children feel that they’re not seen, loved or valued, as their needs are not seen as important.”

It hardly sounds like a recipe for a healthy home life, and according to experts, the consequences can be far-reaching.

People raised by narcissists often report a feeling of not being good enough, and believe that love is a conditional thing.

Often, children of narcissists are overly sensitive, deeply insecure, and usually unable to see themselves as good, worthy and lovable.

“Effectively, everything the child does, and their entire existence, is for that parent,” agrees O’Malley.

“I’ve had clients raised by narcissistic parents and it’s so damaging for them. They feel they’ve been put on earth as a reflective glory of their parents. The deep message that is sent to them from an early age is that you are Number 2. You always put your own needs down so your parents look good.

“In adulthood, you don’t know what you like or what job you want, because you have lost touch with a sense of who you are,” she adds. “Often, you fall into a very controlling relationship, because that person fills the very same gap as your parents. And when you lose yourself entirely, it’s very hard to come back from that.”

Me By Elton John is out on October 15