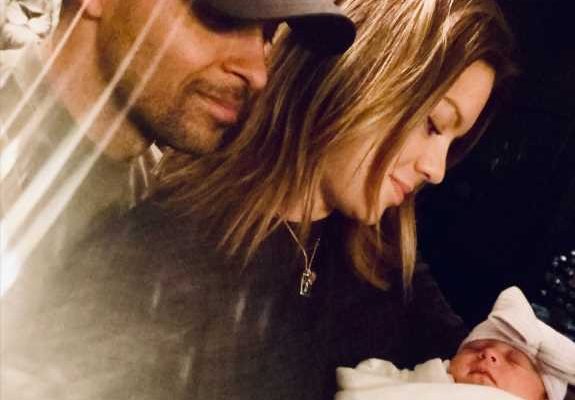 Wilmer Valderrama traveled the world to land on the perfect baby name for his firstborn.

The NCIS actor and his fiancée Amanda Pacheco welcomed their first child together on Feb. 15, and speaking exclusively with PEOPLE about his life as a new dad, Valderrama reveals his baby girl's "strong" name: Nakano Oceana Valderrama.

"The name was exciting to figure out because, you know, everyone is gonna have an opinion," Valderrama, 41, says with a laugh. "When we said the name, it created an unbelievable debate in our family. Some people thought it was off the wall, and others thought that it was just serendipitous and so beautiful."

As the star explains, the name was inspired by a trip he and Pacheco took to Japan — a memorable trip that strengthened their relationship, and one that saw the pair exchange "I love yous" for the first time.

"Amanda and I traveled the world on our first year of our relationship. We decided to just throw ourselves in the deep end, so we traveled the planet. And one of those big trips that we took was to Japan," he says. "… There was something very spiritual about traveling there and really understanding the culture, to take it in, the spirituality of it all. It really touched us. That trip was just so beautiful and eye-opening."

"That was the trip where we decided we would be together, that we would really be together," he adds. "Japan was a big moment for us. I was really proud of that trip because it really bonded us and gave us this security to just move forward and really plan life and really think about what we both really wanted."

Want to get the biggest stories from PEOPLE every weekday? Subscribe to our new podcast, PEOPLE Every Day, to get the essential celebrity, entertainment and human interest news stories Monday through Friday. Valderrama says when it came time to decide on a moniker for their baby on the way, the couple researched ancient Japanese warriors, ultimately finding the legend of Takeko Nakano, a female samurai.

"Nakano became something that felt strong, felt unique, felt different," the proud dad explains, adding, "I thought what a cool, fun little conversation topic for our daughter to have as she grows older. But also, the respect and the heritage, and the tribute to one of those beautiful moments where my fiancée and I said 'I love you' for the first time. To commemorate that trip to Japan with our first labor of love."

As for the newborn's middle name, Oceana is tied to Pacheco's profession as a divemaster and her passion for marine life. (The new mom is also a model.) "She's incredibly passionate about the ocean and diving and ocean life, so that was another tribute to her mom," says Valderrama.

Reflecting on his journey to fatherhood, Valderrama says he feels as if he was "genetically built to be a dad," sharing that he was the one keeping track of ovulation apps and "counting all the days [and] windows" to conceive a child.

"Everybody talks about, 'I'll take the classes and do the podcast and learn more from other parents and all that stuff.' I kind of went in on it just more open-hearted and understanding and trusting that some things were going to wake up in me. And they did," he says. "There was a very beautiful, primal and magical trait that woke up in me that just kind of engaged the moment that baby came."

"I don't feel any type of pressure or concerns or insecurities. They gave me the opportunity at the hospital to change her first diaper and I jumped at the opportunity to do it. It was a pleasure to change my baby's diaper! I kind of dove in," adds the That 70's Show alum. "I just took the role and really, really was fascinated and excited to learn more about it." Valderrama says Nakano was "destined to be here at the time that she was supposed to" despite the pandemic, and that it was more important for them to start their family and postpone their wedding for when it's safer.

"Amanda and I were planning to have a family way before this pandemic. We had made up our mind that family in the very near future was part of the plan," says Valderrama, who proposed to Pacheco on New Year's Day 2020. "We look at the upside of the pandemic. The only way to live is to look at the opportunity this pandemic gave us, as opposed to what it took from us."

"The exciting thing was to say, well, look, the pandemic put a hold on our wedding, but we looked at each other and we said our family seemed more important to us," he continues. "We immediately said let's have our first kid, and it was a beautiful decision that was met with so much enthusiasm from both of us. We just couldn't wait. It was more important [to us] to start a family and then the wedding could happen when it could happen and when we can responsibly have one."