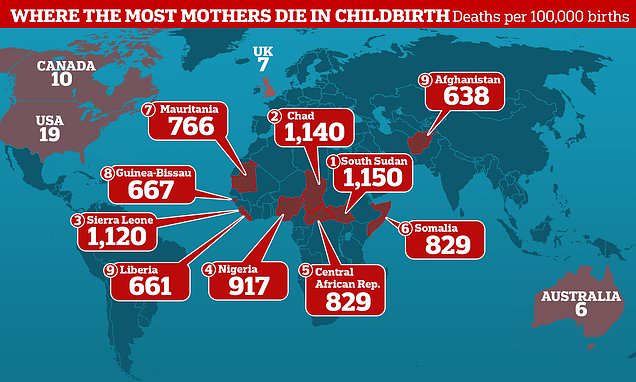 Mothers in the UK are almost FOUR TIMES more likely to die in childbirth than those from Poland and Belarus, UNICEF report reveals

British mothers are almost four times more likely to die during childbirth than those in Poland or Belarus, a report has revealed.

UNICEF today published figures that show one mother or her newborn baby will die during childbirth every 11 seconds.

The charity’s country-by-country breakdown revealed seven mothers per 100,000 in the UK died during childbirth in 2017.

The UK ranks joint-26th best in the global league table, alongside countries such as Turkmenistan and Macedonia and behind Montenegro.

The US fared even worse. It ranks at joint-56th place with 19 mothers out of every 100,000 dying during childbirth. 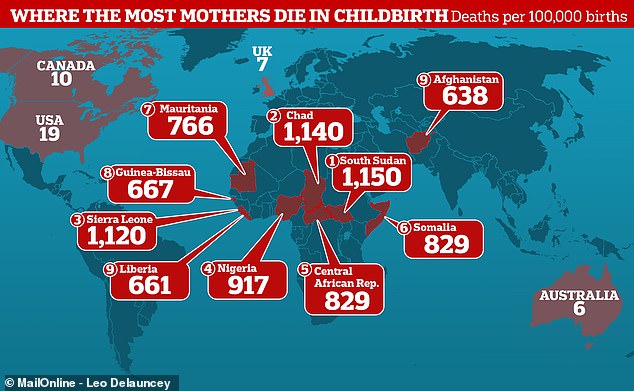 Women in sub-Saharan Africa face the biggest risk of dying during childbirth, with mothers in South Sudan facing a one in 87 chance of death. Afghanistan is the only country in the 10 worst affected which isn’t in Africa

Despite global improvements in survival rates there are still 2.8million deaths shortly after birth every year, UNICEF warned.

Preventable diseases, dirty water and a lack of basic medicines and vaccines are to blame for many of these deaths, with women in poorer countries worst affected.

‘Around the world, birth is a joyous occasion. Yet, every 11 seconds, a birth is a family tragedy,’ said Henrietta Fore, executive director of UNICEF.

‘A skilled pair of hands to help mothers and newborns around the time of birth, along with clean water, adequate nutrition, basic medicines and vaccines, can make the difference between life and death.

‘We must do all it takes to invest in universal health coverage to save these precious lives.’

UNICEF said governments around the world must invest more in preventing killer illnesses such as pneumonia, diarrhoea and sepsis, and to make sure families have access to skilled health workers.

The international charity also called for all women to have access to clinics with clean water, soap and electricity.

Its research discovered that almost 6.2million under-15s died in 2018, with 85 per cent of those happening before the child turned five.

Some 7,000 newborn babies died every day in 2018, three quarters of them within a week of being born.

WHERE ARE MOTHERS MOST LIKELY TO DIE DURING CHILDBIRTH?

WHERE ARE MOTHERS LEAST LIKELY TO DIE DURING CHILDBIRTH?

The statistics released by UNICEF revealed the countries where mothers’ death rates were the highest in 2017.

All but one of the top 10 were in Africa – women in sub-Saharan Africa face a one in 37 risk of dying during pregnancy or childbirth over their lifetime.

By comparison, the lifetime risk for a woman in Europe is one in 6,500.

Sub-Saharan Africa and Southern Asia account for around 80 per cent of global maternal and child deaths.

In 2018, one in every 13 children in sub-Saharan Africa died before their fifth birthday.

This was 15 times higher than the risk a child faces in Europe, where just one in 196 under-fives die.