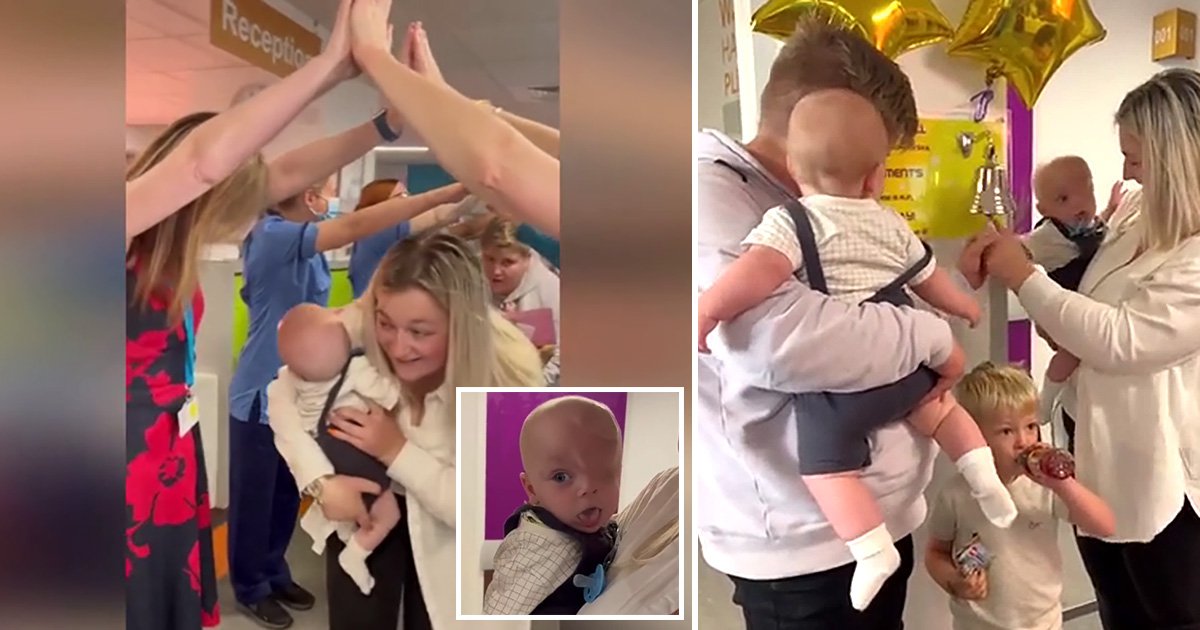 A one-year-old baby has been declared cancer-free after needing to have his eye removed to save him from a malignant tumour.

Little Caleb Mackay’s family first noticed something was wrong when he was born in August 2021, as he already had severe swelling behind his left eye.

His mother Chloe Collins, 23, claims the youngster was ‘fobbed off’ three times by doctors at Princess Alexandra Eye Pavilion in Edinburgh after being checked over there in the weeks that followed.

But the mum knew something was seriously amiss with her baby and persisted in her search for further treatment after medication didn’t work.

Chloe said: ‘Trying to get diagnosed was an absolute nightmare.

‘We noticed swelling to the eye and lots of doctors looked at it and said there was nothing wrong.

To view this video please enable JavaScript, and consider upgrading to a webbrowser thatsupports HTML5video

‘It kept getting worse and worse, and then we went for an emergency CT scan which showed he had a tumour behind his eye.

‘They sent us away with medication to try and shrink it but it was just getting worse and worse.’

In October, after four visits to the eye pavilion, doctors found that Caleb had a malignant rhabdoid tumour.

The baby, who’s from East Calder, West Lothian, had to undergo emergency surgery to remove his entire eye, and then went through five rounds of chemotherapy.

Meanwhile, Chloe was told that if the cancer had spread, then Caleb would have been placed on end-of-life care.

Chloe said: ‘It was horrendous, physically and emotionally.

‘We were constantly fobbed off, being told nothing was wrong with him, but we knew there was.

‘There 100% might have been a chance to save his eye as this grew rapidly and aggressively.

‘Then he had to go through five stages of chemotherapy every two weeks.

‘We were told that if the cancer had spread anywhere else then he would have been put on end of life care.’

Thankfully, on August 30, the one-year-old was given a clean bill of health after finishing his treatment and getting a new MRI scan at the Royal Hospital for Children and Young People in Edinburgh.

Chloe said: ‘It was very emotional but amazing to finally get the all-clear.

‘It’s absolutely amazing, we never thought we would be where we are today.

A tear-jerking clip shows Caleb ringing the bell at the hospital to signal that he was cancer-free in June this year, with NHS staff lined the ward to cheer and celebrate his great news.

Kyle posted the video on TikTok in July with a caption that read: ‘Our boy did it! He’s such a little trooper, it’s up from here onwards.

‘I love you wee dude, you’re my inspiration.’