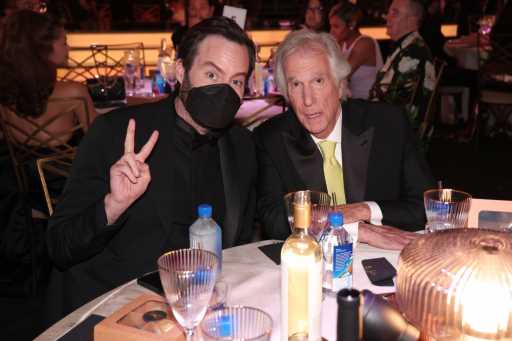 Bill Hader, the star of the HBO comedy series, Barry, may have walked away empty-handed from Monday night’s Emmy Awards, but the actor gained a new legion of fans for being seemingly the only guest in attendance wearing a mask.

Hader, who was nominated for Outstanding Lead Actor and Outstanding Director was seen sporting a black KN95 while seated next to his co-stars, which included 76-year-old Henry Winkler.

“Bill Hader is the only celebrity wearing a mask in a room full of high powered peer pressure. Let this example help you next time you feel like the weirdo. Weird is good.” wrote one Twitter fan.

Hader, who suffers from an auto-immune condition, told The Hollywood Reporter earlier this year that he almost never left his house from March 2020 until he was fully vaccinated in the spring of 2021. And that the pandemic only exacerbated his anxiety, which worsened the migraines he had suffered from for years.

Many members of the disability community were quick to notice Hader’s mask and thank him. One Twitter fan said, “SOMEONE AT THE EMMYS PLEASE THANK BILL HADER ON BEHALF OF THE ENTIRE DISABLED COMMUNITY FOR WEARING A MASK AT THE EMMYS.”

While another wrote, “Bill Hader was the ONLY one wearing a f&ing mask. Believe me, my multiply disabled, high risk a$$ noticed.”

This year’s Emmys’ Covid-19 policy did not require guests to wear a mask for the event, however people were required to either show proof of vaccination or a negative test in order to attend. But let’s face it, masking up has become an exception in many public settings, even though COVID-19 is still infecting around 68,000 Americans a day and killing 330.

Last year’s award show faced heated backlash for not adhering to social distancing restrictions and not hosting the event outdoors. But one year later, restrictions are relaxed, and immunocompromised people are still tasked with protecting themselves.

Yet, as another viewer noted, Hader won admiration and praise (as well as a f-ckton of Emmys) for “resisting peer pressure” and prioritizing his health. And we wholeheartedly agree: “We stan a safe king!”

Before you go, check out the best all-natural cold and flu products for kids: