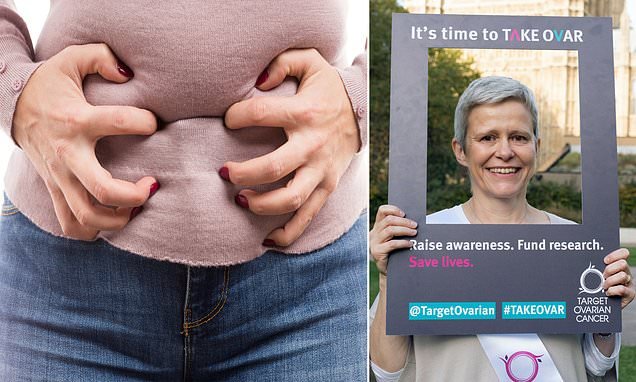 Bloating may not be sign of too many pigs in blankets: Charity warns women having an inflated stomach could be a sign of ovarian cancer

You may think you’re bloated from tucking into the pigs in blankets and endless amounts of cheese this Christmas.

But a charity has warned an inflated stomach could actually be a sign of something much more sinister in women – ovarian cancer.

Thousands of women are unaware that bloating is a symptom of the killer disease, according to Target Ovarian Cancer.

The charity is now urging women to remain vigilant about ovarian cancer so that bloating isn’t just passed off as festive overindulgence. 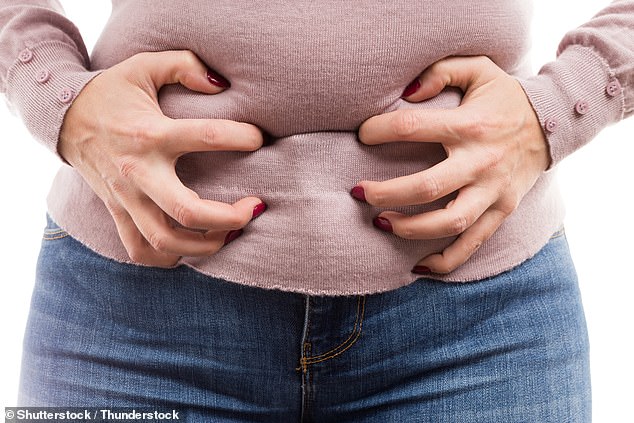 Its director of communications Alexandra Holden said: ‘Feeling bloated and full over the holidays is common for many women.

‘However, it is important women know about ovarian cancer and that anyone experiencing persistent bloating should make an appointment with their GP.’

Ms Holden added: ‘Knowing the symptoms of ovarian cancer can save lives.’

Research by the charity has previously found only one in five women can name bloating as a symptom of ovarian cancer.

Awareness of the three other main symptoms – stomach pain, loss of appetite and needing to urinate more often – is even lower.

The charity, based in London, said that raising awareness of symptoms is a critical step to avoiding delayed diagnosis.

Andrea Oliver, 55, from Middlesex, was diagnosed with ovarian cancer after feeling bloated and unable to eat on holiday

Currently, two-thirds of UK women are diagnosed with ovarian cancer once the disease has already spread, making it harder to treat and putting their lives at risk.

And research has shown women are more likely to consider changing their diet than visit their GP when confronted with persistent bloating.

Andrea Oliver, 55, from Middlesex, was diagnosed with ovarian cancer after feeling bloated and unable to eat on holiday.

She said: ‘Looking back, even though I’d seen the symptoms of ovarian cancer, I still kept putting them down to other things.

‘During a holiday my husband noticed I wasn’t eating much, but I thought it was because we were eating late in the evening.

‘Don’t mistake the symptoms for something else, be aware what persistent bloating and bladder issues could mean, especially over the holiday season.’

WHAT ARE THE SYMPTOMS OF OVARIAN CANCER?

The symptoms of ovarian cancer can be difficult to recognise, particularly early on.

They’re often the same as symptoms of less serious conditions, such as irritable bowel syndrome (IBS) or pre-menstrual syndrome (PMS).

The most common symptoms of ovarian cancer are:

Other symptoms can include:

When to see your GP

See your GP if:

It’s unlikely you have cancer, but it’s best to check. Your GP can do some simple tests.