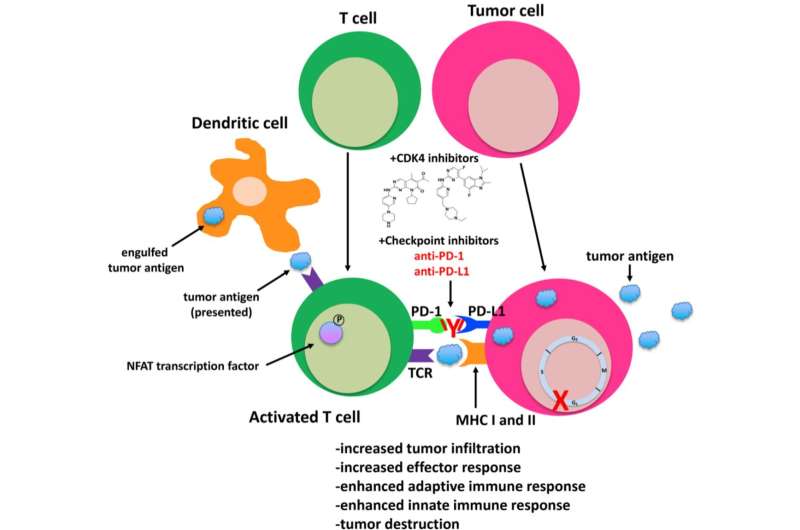 The mammalian cell cycle is divided into four phases, Gap 1 (G1), Synthesis (S), Gap 2 (G2) and Mitosis (M), whose order and timing are critical for accurate transmission of genetic information. Consequently, a number of biochemical pathways have evolved to ensure that initiation of a particular cell cycle event is dependent on the accurate completion of another. These biochemical pathways have been termed “checkpoints.”

The cell cycle is regulated in part by cyclins and their associated serine/threonine cyclin-dependent kinases, or CDKs. CDK4, in conjunction with the D-type cyclins, mediates progression through the G1 phase when the cell prepares to initiate DNA synthesis. Although Cdk4-null mutant mice are viable and cell proliferation is not significantly affected in vitro due to compensatory roles played by other CDKs, this gene plays a key role in mammalian development and cancer.

In the current review paper, researchers Stacey J. Baker, Poulikos I. Poulikakos, Hanna Y. Irie, Samir Parekh, and E. Premkumar Reddy from Icahn School of Medicine at Mount Sinai discussed the role that CDK4 plays in cell cycle control, normal development and tumorigenesis as well as the current status and utility of approved small molecule CDK4/6 inhibitors that are currently being used as cancer therapeutics.

In summary, “CDK4/6 is a key mediator of cell cycle progression through the G1 phase, the time when a cell prepares to initiate DNA synthesis. The cell’s reliance on this protein as well as its CYCLIN D binding partners and downstream target RB for proliferation underscores why the CDK4/CYCLIN D/RB signaling module is often deregulated in transformed cells.

“The approval of 3 CDK4/6 inhibitors as treatments for ER+ breast cancer has paved the way for ongoing clinical studies evaluating the utility of these inhibitors in combination with those of other signaling pathways (such as but not limited to BRAF, PI3K and MEK) in multiple tumor types that exhibit reliance on CYCLIN D1/CDK4/RB or other components of the cell cycle such as p16 and p27.

“The success of these trials, as well as understanding the mechanisms that drive resistance to these inhibitors, should provide an answer as to whether selective inhibitors of CDK4/6 can provide therapeutic benefit in a broader array of cancers.”