Researchers in the United States have conducted a large-scale study showing that the two-dose regimen vaccines developed by Pfizer-BioNTech and Moderna to protect against coronavirus disease 2019 (COVID-19) appear to be highly effective and durable in reducing the risk of hospitalizations and deaths following infection with severe acute respiratory syndrome coronavirus 2 (SARS-CoV-2).

The team – from the University of North Carolina at Chapel Hill Gillings School of Global Public Health, the North Carolina Department of Health and Human Services, and North Carolina State University –reports that the one-dose vaccine regimen developed by Janssen is also highly effective at preventing hospitalizations and deaths.

However, Danyu Lin and colleagues say that the Moderna vaccine is significantly more durable in reducing the risk of symptomatic COVID-19 than the Pfizer vaccine, at 81.9% versus 70.1% seven months post-immunization.

The researchers say that the study of more than 10.6 million individuals in North Carolina suggests that waning vaccine efficacy is caused primarily by declining immunity rather than the emergence of new SARS-CoV-2 variants.

They also add that it would be worthwhile to investigate the efficacy of Janssen’s vaccine as a two-dose regimen, with the second dose given approximately 1 to 2 months following the first.

A pre-print version of the research paper is available on the medRxiv* server while the article undergoes peer review.

Study: Effectiveness of Covid-19 Vaccines in the United States Over 9 Months: Surveillance Data from the State of North Carolina. Image Credit: NIAID

Concerns about the duration of protection provided by vaccination

Since the SARS-CoV-2 virus was first identified in Wuhan, China, in late December 2019, infection with the virus has caused more than 45 million cases of COVID-19 and more than 740 thousand deaths in the United States alone.

The most promising approach to ending the pandemic is the ongoing deployment of effective vaccines.

Between December 2020 and February 2021, three vaccines developed by Pfizer-BioNTech (BNT162b2), Moderna (mRNA-1273) and Janssen (Ad26.COV2.S) were granted emergency use authorization by the Food and Drug Administration and were deployed in the United States shortly after.

However, a recent surge in breakthrough infections has raised concerns about the duration of protection these vaccines provide and their effectiveness against newly emerged SARS-CoV-2 variants, such as the currently dominant B.1.617.2 (delta) variant.

Several observational studies have assessed waning vaccine efficacy over time, but the follow-up has typically been shorter than 6 months and sample sizes were sometimes small.

Therefore, it is unclear whether waning efficacy is due to declining immunity following vaccination or the emergence of novel variants that are more transmissible.

What did the researchers do?

Surveillance systems in the United States aim to capture the vaccination histories and COVID-19 outcomes for all individuals, providing valuable resources for assessing vaccine efficacy in the real-world setting.

Lin and colleagues extracted data on vaccination histories and clinical outcomes (COVID-19, hospitalizations, and death) for a period of up to 9 months (December 13th, 2020, to September 8th, 2021) by linking data from the North Carolina COVID-19 Surveillance System and COVID-19 Vaccine Management System. This surveillance data covered the entire state of North Carolina, which has a population of approximately 10.6 million.

The large sample size allowed the researchers to estimate effectiveness against COVID-19 incidence, hospitalization and death over successive post-immunization time periods for the three vaccines currently being deployed in the United States.

Effectiveness at reducing risk of COVID-19

For the Pfizer two-dose regimen, vaccine effectiveness at reducing the risk of symptomatic COVID-19 peaked at a level of 94.9% at 2 months (following the first dose). Efficacy started to decline after 2 months and dropped to 70.1% after 7 months. For the Moderna two-dose regimen, efficacy reached 96.0% at 2 months. Efficacy started to decline after 2 months but was maintained at 81.9% after 7 months. 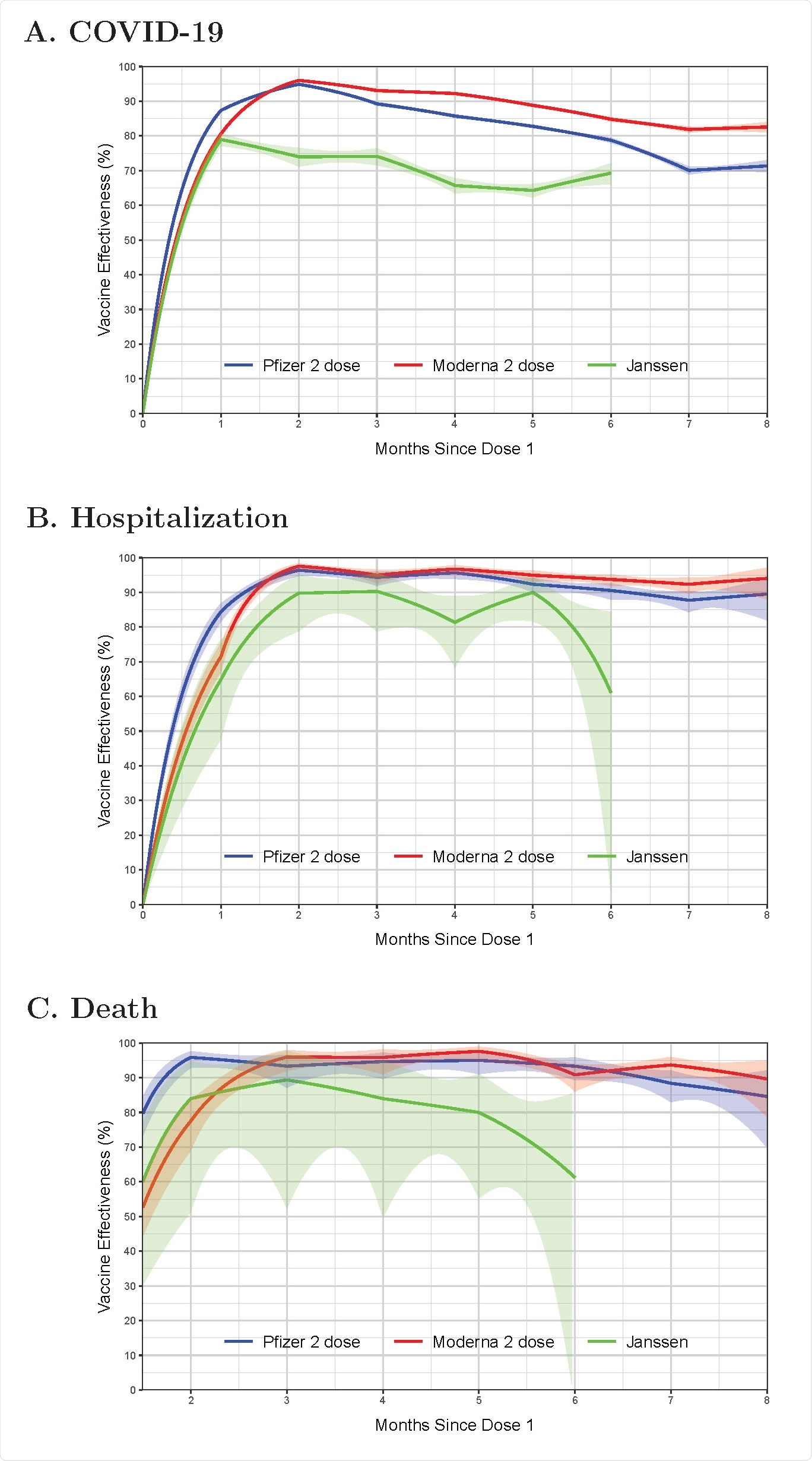 For the Janssen one-dose regimen, efficacy peaked at a level of 79.0% at 1 month, before starting to decline and falling to 64.3% after 5 months. Since the Janssen vaccine was not deployed until March 2021, data on its efficacy beyond 5 months is limited.

Effectiveness at reducing risk of hospitalization

For Janssen’s one-dose regimen, efficacy peaked at 89.8% at 2 months and was maintained above 80% through 5 months.

Effectiveness at reducing risk of death

For Janssen, effectiveness peaked at 89.4% at 3 months and stayed above 80% through 5 months.

For all three vaccines, the peaking and waning patterns were similar for vaccinated individuals at different dates and across various demographic subgroups (including age, sex, race/ethnicity, geographic region, county-level vaccination rate).

The team says these results suggest that waning efficacy was primarily caused by a decline in immunity following primary vaccination rather than by the emergence of new variants with increased transmissibility.

What did the authors conclude?

Lin and colleagues say the results show that the effectiveness of the Pfizer-BioNTech and Moderna vaccines is remarkably high and durable against hospitalization and death and that the Moderna product offers a significantly longer duration of protection than the Pfizer vaccine, particularly against symptomatic COVID-19.

The Janssen vaccine also offers a high level of protection against hospitalization and death, they add.

The researchers say these findings show that unvaccinated people in the United States should be strongly encouraged to get immunized.

They also point out that the effectiveness of the Janssen vaccine reaches a peak level similar to that of the Pfizer-BioNTech and Moderna vaccines one month after vaccination, before then starting to decline.

“Thus, it would be worthwhile to investigate the use of the Janssen vaccine as a two-dose regimen given approximately 1 to 2 months apart,” they conclude.

medRxiv publishes preliminary scientific reports that are not peer-reviewed and, therefore, should not be regarded as conclusive, guide clinical practice/health-related behavior, or treated as established information.

Sally first developed an interest in medical communications when she took on the role of Journal Development Editor for BioMed Central (BMC), after having graduated with a degree in biomedical science from Greenwich University.