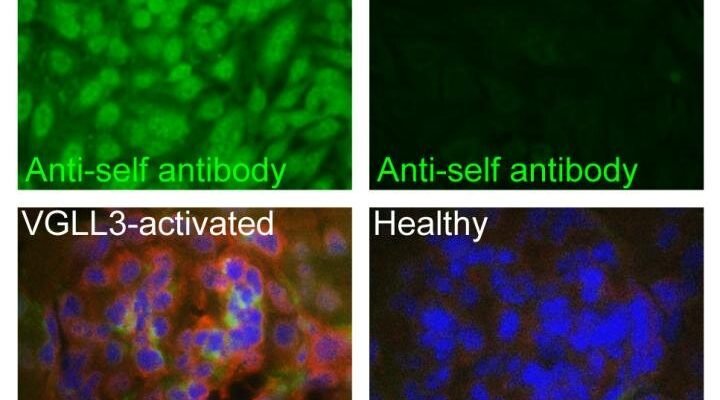 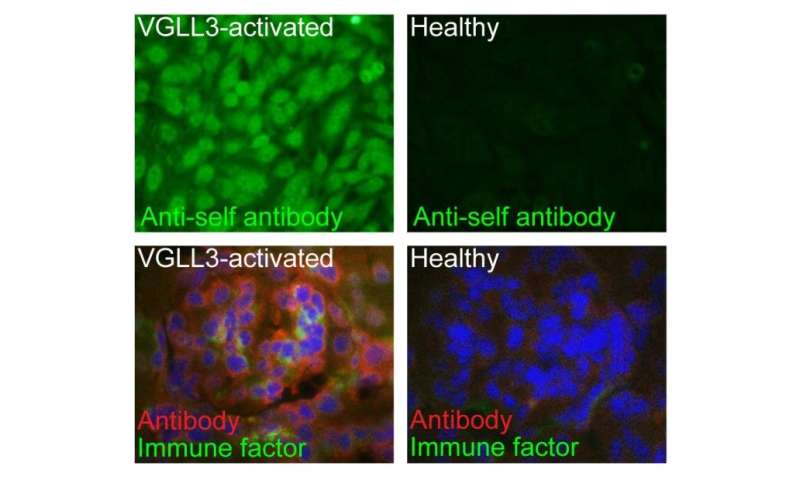 It’s one of the great mysteries of medicine, and one that affects the lives of millions of people: Why do women’s immune systems gang up on them far more than men’s do, causing nine times more women to develop autoimmune diseases such as lupus?

Part of the answer, it turns out, may lie in the skin.

New evidence points to a key role for a molecular switch called VGLL3. Three years ago, a team of University of Michigan researchers showed that women have more VGLL3 in their skin cells than men.

Now, working in mice, they’ve discovered that having too much VGLL3 in skin cells pushes the immune system into overdrive, leading to a “self-attacking” autoimmune response. Surprisingly, this response extends beyond the skin, attacking internal organs too.

Writing in JCI Insight, the team describes how VGLL3 appears to set off a series of events in skin that trigger the immune system to come running—even when there’s nothing to defend against.

“VGLL3 appears to regulate immune response genes that have been implicated as important to autoimmune diseases that are more common in women, but that don’t appear to be regulated by sex hormones,” says Johann Gudjonsson, M.D., Ph.D., who led the research team and is a professor of dermatology at the U-M Medical School. “Now, we have shown that over-expression of VGLL3 in the skin of transgenic mice is by itself sufficient to drive a phenotype that has striking similarities to systemic lupus erythematosus, including skin rash, and kidney injury.”

They found that extra VGLL3 in skin cells changed expression levels of a number of genes important to the immune system. Expression of many of the same genes is altered in autoimmune diseases like lupus.

The gene expression changes caused by excess VGLL3 wreaked havoc in the mice. Their skin becomes scaly and raw. Immune cells abound, filling the skin and lymph nodes. The mice also produce antibodies against their own tissues, including the same antibodies that can destroy the kidneys of lupus patients.

The researchers don’t yet know what causes female skin cells to have more VGLL3 to begin with. It may be that over evolutionary time females have developed stronger immune systems to fight off infections—but at the cost of increased risk for autoimmune disease if the body mistakes itself for an invader.

The researchers also don’t know what triggers might set off extra VGLL3 activity. But they do know that in men with lupus, the same VGLL3 pathway seen in women with lupus is activated.

Many of the current therapies for lupus, like steroids, come with unwanted side effects, from increased infection risk to cancer. Finding the key factors downstream of VGLL3 may identify targets for new, and potentially safer, therapies that could benefit patients of both sexes.

Lupus, which affects 1.5 million Americans, can cause debilitating symptoms, and current broad-based treatment with steroids can make patients far more vulnerable to infections and cancer.

Their colleague and senior coauthor Michelle Kahlenberg, M.D., of the U-M Division of Rheumatology, is now recruiting patients with lupus for a study sponsored by U-M’s A. Alfred Taubman Medical Research Institute that could provide answers to these questions and more.

Billi, a resident in dermatology, notes that when she speaks with patients who come to Michigan Medicine’s dermatology clinics for treatment of the skin problems lupus can cause, she has to acknowledge the limits of current treatment. Even so, she says, patients are eager to take part in studies by contributing skin and DNA samples that could lead to new discoveries about their condition.