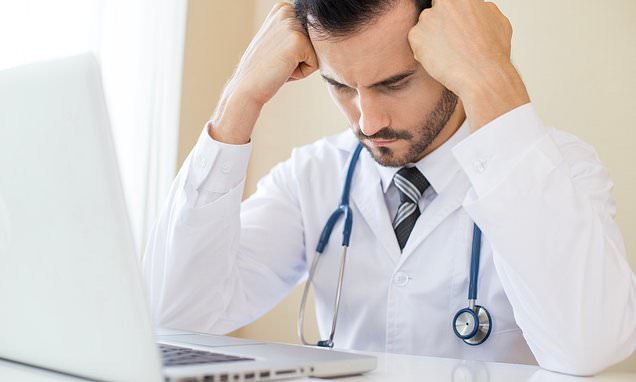 Doctors are ‘at the brink of breaking point’ trying to ensure patient care with a FIFTH planning to leave, medical regulator warns

Doctors are at the ‘brink of breaking point’ to ensure patient care, according to a stark warning from a regulator.

Britain is ‘running out of time’ to prevent a significant loss of doctors, putting millions of patients at risk, the General Medical Council (GMC) said.

A new report from the regulator said thousands of doctors are planning to leave the profession in ‘unprecedented numbers’.

A survey of 2,600 UK doctors found that within the next three years, a fifth are considering going part time. 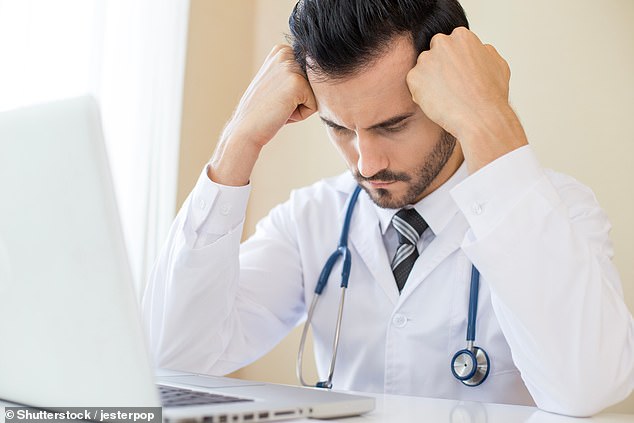 Doctors are at the ‘brink of breaking point’ to ensure patient care, according to a stark warning from the doctors’ regulator The General Medical Council (GMC)

One in five are planning on leaving Britain to pursue more lucrative careers abroad and many are planning early retirement, according to the poll.

A fifth of 45 to 54 year old doctors and two thirds of 55 to 64-year-olds, intend to retire early, which the GMC said was particularly ‘concerning’.

It said the findings come ‘against a backdrop of uncertainty’ over Brexit, with almost one in 10 doctors (nine per cent) working in the UK coming from the European Union.

The GMC report, which was published today, calls for a workforce strategy to solve the problems raised by doctors.

‘The UK is running out of time to prevent a significant decline in workforce numbers, which risks patient safety,’ the authors warned.

‘The health system now faces a decline in what can be offered and how it is offered by doctors who are prioritising and compromising their work in an effort to maintain standards of care for their patients.

‘It shows that doctors are reaching the limit of what can be done.

The NHS will offer Australian doctors a ‘relocation package’ of up to £18,500 to move to the UK as it tries to hire more GPs to battle a staffing crisis, it was reported in October.

The health service will target GPs who previously left the UK for Australia and are looking to return home, as well as Australian GPs who want to live in the UK.

NHS England’s director of care said the UK was ‘pulling out all the stops’ as it tries to bring in doctors from a country where training and quality are as high as at home.

Doctor recruitment is being widened to Australia after the NHS received applications from more than 1,200 GPs in Europe.

‘So it makes sense to head to Australia where doctors’ skills, training and high levels of care closely match those of their British counterparts.

‘Our new evidence reveals the effect of these pressures and the steps doctors are taking to cope.’

The report added: ‘We are concerned that some of these strategies are risky or unsustainable.

‘The medical profession is at the brink of a breaking point in trying to maintain standards and deliver good patient care.’

Pressures faced by doctors include a rising number of patients, some with multiple complex health conditions, a shortage of experienced staff and system pressures including targets and administrative duties.

These have led to longer hours and a deterioration of work/life balance.

The regulator raised concerns about burnout and poor mental health as a result.

Measures taken to cope with pressures include neglecting learning and adopting strategies which ‘prioritise immediate patient care and safety’ such as making an unnecessary referral or bypassing clinical checklists in order to get through workload, it added.

Meanwhile doctors ‘acting up’ or ‘acting down’ – performing duties beyond or below their expertise – is becoming ‘normalised’, the report adds.

Professor Sir Terence Stephenson, chairman of the GMC, said: ‘Doctors are telling us clearly that the strain that the system is under is having a direct effect on them, and on their plans to continue working in that system.

‘There are different challenges in each of the four countries of the UK but the NHS is at a critical juncture; without a long-term UK-wide plan to ensure it has a workforce with the right skills in the right places and without the right support, doctors will come under even greater strain.’

NHS figures show there are around 140,000 doctors employed in the NHS.

But the number of full-time doctors in the workforce has fallen by up to 1,000 since then.

The Royal College of General Practitioners (RCGP) has long warned of a ‘crisis’ in the GP workforce.