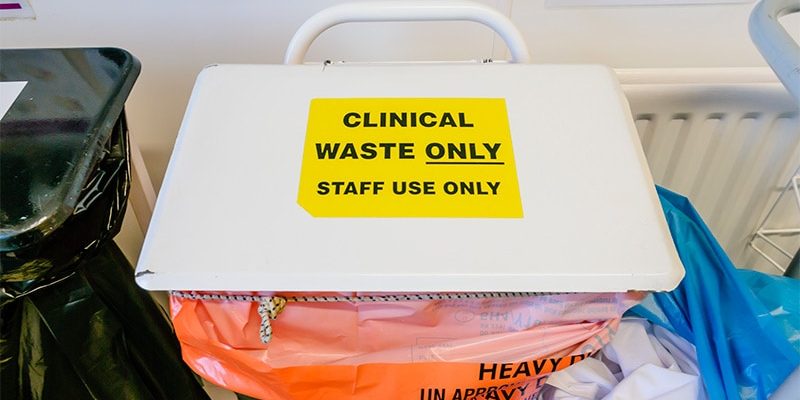 Moving recycling bins and providing education to staff led to a reduction in the carbon footprint at a Portuguese hospital’s endoscopy unit, according to a study published in Gut.

“Sustainable endoscopy regarding waste handling was achievable and sustained over time, did not compromise productivity, and may be cost-effective for stakeholders,” wrote João A Cunha Neves, MD, MMSc, of Algarve University Hospital Centre in Portimão, Portugal, and his colleagues.

Although other work has shown that several of the strategies for reducing endoscopic waste are ‘easy wins,’ the authors noted that “lack of awareness by most endoscopy staff regarding the expenses and correct categorisation of endoscopic waste is the primary barrier to recycling in many endoscopy units.”

The four-stage prospective study took place at the Portimão endoscopy unit of Algarve University Hospital Centre in Portugal. It began with a 4-week audit that involved weighing regulated medical waste (“material fully contaminated with blood or body fluids or containing infectious agents”) and landfill waste (nonrecyclable material that isn’t fully contaminated). The researchers excluded from the analysis all waste from sharps containers, pre- and postprocedure activities, and endoscope reprocessing.

The second stage was one week of medical, nursing, and auxiliary team education about handling waste, in part based on observations collected during the first stage. Each endoscopy generates an estimated 1.5 kg of plastic waste, but recycling bins often are not available for the 0.3 kg of waste that’s recyclable. During the second stage, recycling bins were placed in endoscopy rooms while regulated medical waste and landfill bins were moved elsewhere.

“In both assessment periods, total waste produced by diagnostic standard endoscopic procedures was similar, but both regulated medical waste and overall carbon footprint were reduced,” the authors reported.

In a four-question assessment of the intervention with staff, “the entire team agreed that the study did not interfere with the daily work routine and was helpful in raising awareness about waste sorting within the unit,” the authors reported. The staff “also acknowledged that recycling waste allowed for more sustainable activity within the endoscopy unit, and that the achievements of the study were to be maintained in the future.”

How Feasible Is Change?

The authors noted that health care accounts for 4.4% of the world’s carbon footprint and that endoscopy is the third largest generator of hospital medical waste, primarily because of single-use consumables. However, 71% of that health care carbon footprint comes from supply chain issues, particularly transportation, John I. Allen, MD, MBA, a retired clinical professor of medicine at the University Michigan, Ann Arbor, said in an interview. “Facility emissions add 17% and heating/cooling add 12%,” he said. “So, the actual footprint of endoscopy is quite small.”

Reducing single-use equipment and disposables by a third is a small overall impact considering the “labor-intensive education and monitoring system,” said Allen, who was not involved in the study. “That said, this paper and numerous others remind us of small steps that we can take — mostly to raise awareness about new technologies and more sustainable processes that are available or should be studied – to help transition us from the current [terrible] state to a more climate-friendly style of practice and life.”

One of the study’s limitations was the lack of a cost-benefit or impact analysis, according to Allen. Climate policies claiming to have local impact can be problematic when they “ignore both externalities and the actual wider impact on gas or temperature mitigation,” he added.

But he noted that “many health care systems are already implementing new ways of working with temperature- and carbon-mitigation in mind,” such as his own institution’s pledge to become carbon-neutral within a year. One step on that path has included transitioning more than 30% of their clinic visits to virtual visits, “thus saving [literally] millions of miles in travel and altering our parking construction plans,” Allen said.

“Reduction in climate impact will come from new ways to manufacture endoscopes, less reliance on single-use equipment, and increasing use of materials that encourage recycling,” Allen said. “In order to achieve meaningful climate impact, we need research into what current regulations and processes are necessary to protect patients and staff from infection transmission while creating an environmentally favorable workflow.”

Where Does Making a Difference Begin?

Another limitation was simply the small size of the department itself, which limits how much impact the intervention can have, but the study also showed the feasibility of getting buy-in from a department to make meaningful changes, according to Bishr Omary, MD, PhD, professor of medicine at Rutgers University’s Robert Wood Johnson Medical School, Piscataway, N.J. He was not involved in the study.

“Culture is an important aspect of this, but that’s where education comes in,” Omary said in an interview. “Leadership has to try to encourage and incentivize different units, not just endoscopy, but other surgery, too. I think the most effective approach is going to be top-down, where hospitals and health systems buy into this.”

One challenge to that buy-in is that climate change has become political, said Linda Anh B. Nguyen, MD, clinical professor of medicine and vice chief of clinical operations in Stanford (Calif.) University’s division of gastroenterology and hepatology.

“There may be resistance to implementation by those who do not see the value of reducing waste,” Nguyen, who was not involved in this study, said in an interview. “Successful implementation requires a culture change and reducing the physical barriers to make waste reduction easier. Having an advocate for the program embedded within the endoscopy unit will help with implementation.”

One of the advantages of the intervention in this study, Nguyen said, was its relative ease of implementation.

“The next step would be identifying which of the items that go into landfill can be replaced with reusable products,” Nguyen added.

Omary pointed to Practice Greenhealth as an example of an organization working toward the goal of climate change mitigation through a wide range of initiatives, including ones he has written about. The responsibility for reducing carbon footprints should be shared among individuals, institutions, and systems, Omary said, adding that individuals’ travel, such as to medical meetings, is a major contributor to greenhouse gas emissions.

Nguyen said that gastroenterologists, as well as the entire health care industry, have a responsibility to combat climate change through waste reduction and that it can be done without sacrificing individual patient safety.

“Climate change must be at the forefront of our priorities for present and future generations,” Nguyen said. “We need to leave this world better than when we entered.”

But much of that change must especially occur at levels far higher than individual physicians or institutions, Allen said.

“Major responsibility for altering gastroenterology practices in order to mitigate climate change must originate in regulatory agencies and the manufacturers of our equipment,” Allen said. “Regulations must be based on demonstrated positive impact that is cost-effective for practices and health care systems.”

The research did not use external funding, and the authors reported no financial disclosures or conflicts of interests. Allen has consulted for Topography Health, OSHI Health, and Lynxmd. Nguyen has consulted for Alnylam, Ardelyx, Eli Lilly, Evoke Pharma, Ironwood, Pendulum, Phathom, Neurogastx, Sanofi, and Takeda; has served on the advisory board of Gemelli Biotech; and has received grants from Bold Health and Vanda. Omary had no disclosures.