Hope for MS sufferers: Experimental drug prevents relapses in nine out of 10 patients with the devastating autoimmune disease, study finds

A life-changing treatment for the devastating autoimmune condition, multiple sclerosis (MS), may be on the horizon after signs of the disease completely disappeared from nine out of 10 patients treated with an experimental drug.

More than 900 volunteers with a common form of recurrent MS were given shots of ofatumumab, an drug designed to alter the immune system, over the course of about one-and-a-half years, on average.

Within the first year of treatment, patients were having fewer flare-ups and their blood work showed far fewer signs of inflammation.

By the second year of treatment, nearly 90 percent had no symptoms at all.

MS is not technically fatal, but there is no cure and for many people flare-ups get worse over time and can become debilitating.

The newly-released results of the University of California, San Francisco-led trial for Novartis’s drug suggest that relief from the crippling pain of MS could be less than a year away, if the Food and Drug Administration (FDA) accepts the company’s application for approval. 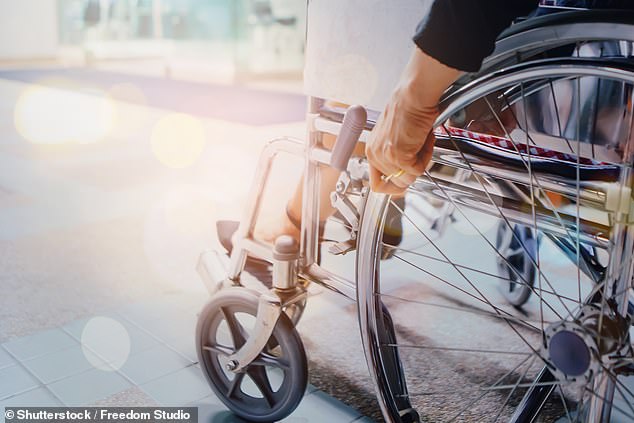 A new drug called ofatumumab targets immune B cells, believed to trigger the attacks on nerve coatings that make the autoimmune disease multiple sclerosis debilitating. In the second year of treatment with the new drug, 90% of patients had no relapses

More than 2.3 million people around the world live with MS, including nearly one million in the US.

Up until the last 20 years, nothing really stood in the way of the progression of the disease.

Now, there are a handful of treatments that can help reduce the number and severity of relapses, but many still need a cane, walker or other assistance to walk within 15 years of diagnosis.

The immune systems of people with MS go haywire, attacking the protective covering of nerves, called the myelin sheath.

Like the plastic the insulates wires so that nothing interrupts the flow of electrical signals through them, myelin ensures smooth, uninterrupted communication between the body and brain via nerves in the brain and spinal cord.

Attacks on this protective covering disrupt these signals, leading to pain and lost mobility.

The irregular activity of the immune system also seems to cause inflammation, further exacerbating the aches and nerve pain of MS.

Attacks from misguided immune cells damage the nerves, leaving scar tissues, or lesions, in their wake.

These lesions are a hallmark of the disease.

WHAT IS MULTIPLE SCLEROSIS?

Multiple sclerosis (known as MS) is a condition in which the immune system attacks the body and causes nerve damage to the brain and spinal cord.

It is an incurable, lifelong condition. Symptoms can be mild in some, and in others more extreme causing severe disability.

MS affects 2.3 million people worldwide – including around one million in the US, and 100,000 in the UK.

It is more than twice as common in women as it is in men. A person is usually diagnosed in their 20s and 30s.

The condition is more commonly diagnosed in people of European ancestry.

The cause isn’t clear. There may be genes associated with it, but it is not directly hereditary. Smoking and low vitamin D levels are also linked to MS.

The majority of sufferers will have episodes of symptoms which go away and come back, while some have ones which get gradually worse over time.

Symptoms can be managed with medication and therapy.

The condition shortens the average life expectancy by around five to 10 years.

People with primary progressive MS (PPMS) don’t have relapses, but instead only get worse and worse after their symptoms first emerge. It only effects 15 percent of all people diagnosed with MS, and progresses at different speeds for different patients.

Relapsing-remitting MS (RRMS) is far and away the most common for, affecting 85 percent of all people diagnosed. This form comes and goes, with flare-ups, or ‘attacks,’ that subside.

Some people’s attacks become progressively worse, while others remain about the same over time.

Some people with RRMS will eventually develop secondary progress MS (SPMS) which eventually stops remitting, and only progresses.

Ofatumumab is designed to treat RRMS, the most common form.

It targets B cells, immune cell that scientists believe are involved in the attacks on myelin in several ways.

Ofatumumab modifies the way that B cells behave, and appeared in the newly published phase 3 trial to largely or entirely stop MS activity.

The trial was led by UCSF but conducted at 385 sites across 37 countries worldwide, comparing the new drug to teriflunomide, an approved drug commonly prescribed to MS patients.

The new drug, which patients can give themselves with an auto-injector pen once a month, cut the number of relapses the patients on it had in half, compared to the pill.

The patients were kept on their respective regimens for an average of 1.6 years. In the second year, the nine out of 10 of the more than 900 patients on ofatumumab didn’t seem to be having any disease progression.

Plus, they had fewer brain lesions and less inflammation.

‘Given the effectiveness we saw in this study with near-complete elimination of inflammation and scarring in myelin-rich areas of the brain, along with the minimal side effects, the use of either of these therapies is most attractive as first-line treatment for most MS patients,’ said corresponding study author Dr Stephen Hauser, a UCSF neuroscientist who has worked on MS treatments for decades.

On the heels of the study, published Wednesday in the New England Journal of Medicine, Novartis is seeking FDA approval for their new drug.

‘While there is not yet a cure, a generation ago MS patients typically became cane- or crutch-dependent within 15 or 20 years, but now they often are spared from significant disability,’ Dr Hauser said.

‘The improvement in MS treatment, especially with drugs that specifically target B cells, is one of the great success stories of medicine.’