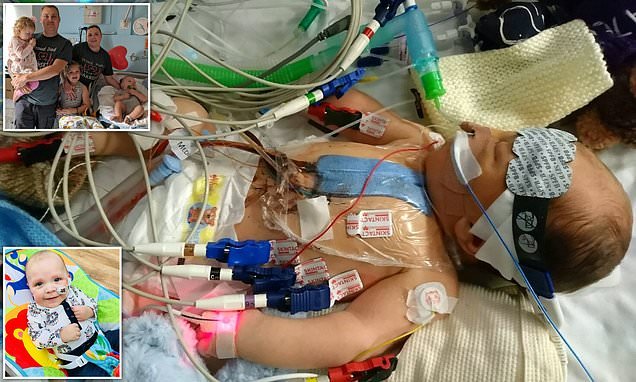 A family have issued an emotional plea to help their seriously ill baby who was born with a rare heart defect.

Jacob Ingleby was delivered by emergency C-section on August 16 last year after doctors noticed he was in distress during labour. After the procedure, the newborn immediately started struggling to breathe.

Jacob was was taken to Bristol Royal Hospital for Children for emergency open heart surgery the next day. While under the knife, he suffered a stroke, which ‘damaged 50% per cent of his brain’. 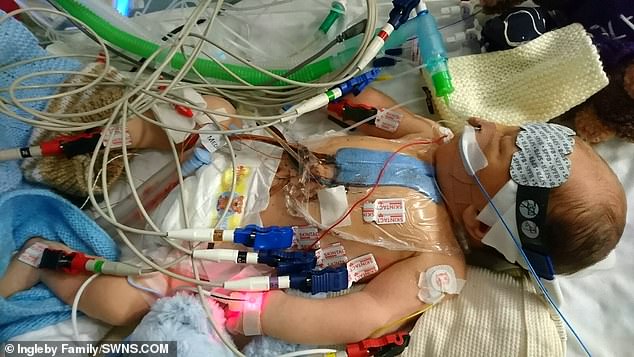 Jacob Ingleby was born by emergency cesarean section after doctors noticed he was in distress during labour. Once delivered, Jacob was struggling to breathe. He was later diagnosed with the rare disorder pulmonary venous drainage (pictured in hospital) 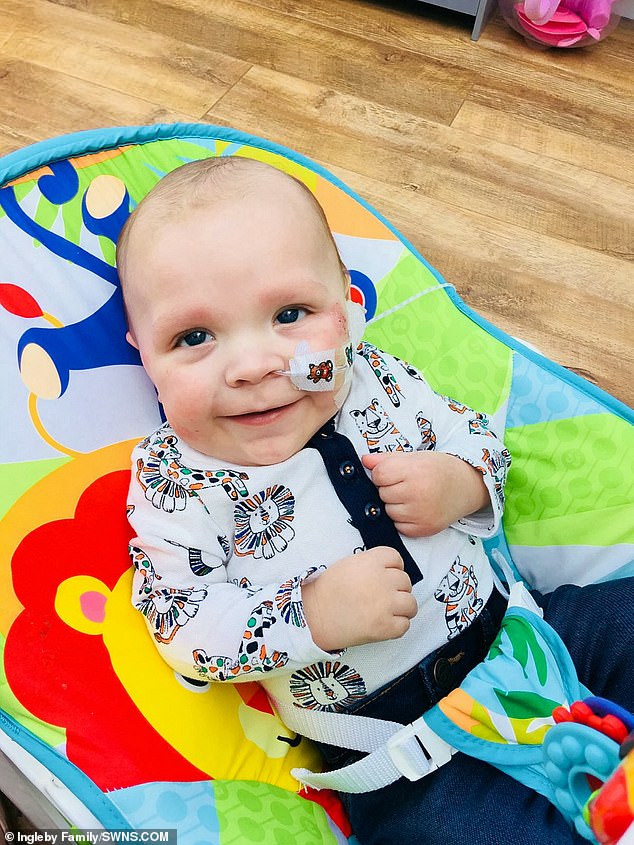 Now 16-months-old, Jacob was taken to Bristol Royal Hospital for Children for open heart surgery at one-day-old. While under the knife, the youngster suffered a severe stroke, which ‘damaged 50 per cent of his brain’. Unable to eat, Jacob requires a feeding tube (pictured) 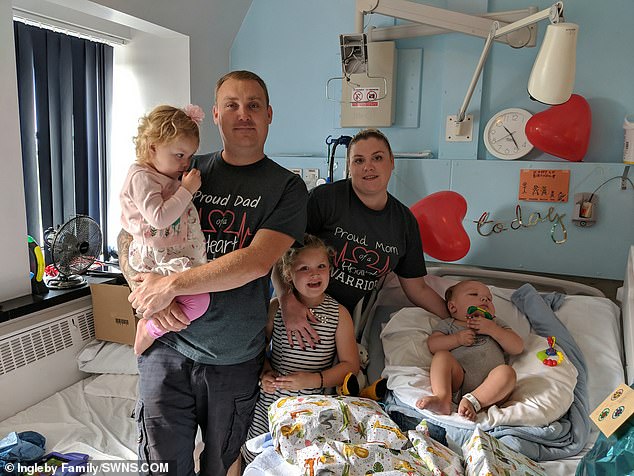 His parents say they are in desperate need of financial help and have launched a Crowdfunder to help pay for their regular trips to a see Bristol specialist (pictured left to right: are sister Isla, two, father Jake, 35,  sister Millie-Mae, six, mother Kelly, 33, and Jacob)

TAPVD is a heart defect that sufferers have since birth. It occurs when oxygen-rich blood leaves the lungs and then enters the incorrect part of the heart. This forces the lungs to cope with high blood flows.

The condition affects around one in every 10,000 babies born in the US every year, according to the Centers of Disease Control and Prevention. Its prevalence in the UK is unclear.

TAPVD can only be treated by open heart surgery, which requires patients have a bypass machine to pump blood. However, these are not as effective as the heart, with some organs getting reduced blood flow. This can result in a stroke if the brain is affected.

Bypass machines can also trigger inflammation and the release of chemicals that cause clots to break lose and embolise, which can also cause a stroke, according to Cincinnati Children’s hospital.

Doctors first noticed something was wrong when Jacob’s mother Kelly Ingelby, 33, was pregnant. They discovered he had an enlarged artery but told Kelly and her husband Jake Ingelby, 35, ‘not to worry’.

But when Jacob was born, it became clear his condition was much more serious.

Speaking of his delivery, Mrs Ingelby said: ‘Jacob was taken away from me straight away because he had become very poorly and I didn’t get to see Jacob for quite a few hours afterwards.

‘The staff were lovely and ended up bringing me a photograph of Jacob because I couldn’t go to see him.

‘I had two other little girls as well – he’s got a six-year-old sister and a two-year-old sister. Everything felt very confused and lonely and worried’. 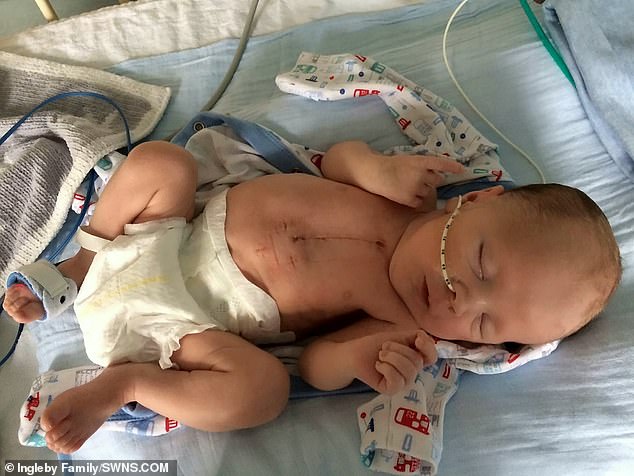 Jacob is pictured after his open heart surgery, with the incision visible on his chest

The stroke caused Jacob to become severely disabled, with him requiring a wheelchair (seen left) to get about rather than learning to crawl. The youngster also battles epilepsy and has limited movement in his right arm, but still manages to raise a smile despite his ordeal (right) 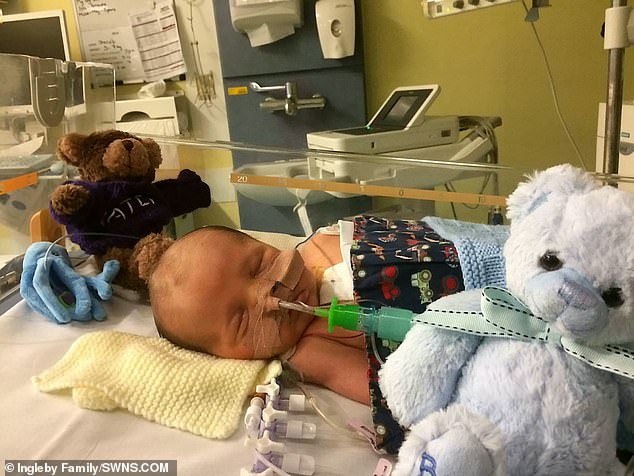 Once diagnosed, Jacob was rushed to Bristol for surgery with his father, while Mrs Ingelby stayed at the Royal Cornwall Hospital to recover from her C-section.

Total anomalous pulmonary venous return is a heart defect that is present at birth.

The condition affects around one in every 10,000 babies born in the US every year, according to the CDC. Its prevalence in the UK is unclear.

TAPVD occurs when oxygen-rich blood leaves the lungs and then enters the incorrect part of the heart. This forces the lungs to cope with high blood flows.

It is unclear exactly what causes TAPVD but it is thought to occur very early in pregnancy when the heart is being formed.

A baby is more at risk if one of its parents had a congenital heart defect.

Breathlessness is the first symptom, which typically occurs soon after birth, and can cause a baby to turn blue.

If the veins are blocked, as well as having an abnormal route, the infant can become very sick and collapse.

Treatment requires babies undergo an open heart operation to connect the veins to the ‘correct’ part of the heart.

They often then need regular check ups throughout their life.

Although the surgery successfully treated Jacob’s heart defect, he suffered a stroke during the procedure that damaged his brain stem, which controls everything from swallowing to breathing.

The youngster now has to be fed through a tube and battles near-constant infections due to his suppressed immune system, according to his father.

Jacob also has epilepsy, as well as limited use of his right arm and extremely poor vision.

Although he is showing some signs of progress, his parents are keen to give him the best quality of life possible and struggle to afford regular trips to see a specialist in Bristol.

Writing on their crowdfunding page, Mr Ingelby, who assembles clean rooms for scientific research, said: ‘He will need more surgery within the next few months which means more time off work and that also takes its toll.

‘My wife has to make several trips a week to the hospital every week for meetings with the consultant and other health professionals.’

Mr Ingelby, who also volunteers at the Royal National Lifeboat Institution, is asking well-wishers to donate £1,000 towards his son’s care.

He added: ‘We are wanting to raise this money for aids in development and soft play mats so he’s safe when on the floor doing physio and also fund expensive trips to Bristol.

‘I’m a very proud person and it’s taken me a long to ask for help but I’m at the point where my family needs it’.

Pictured left at home, Jacob is showing some signs of progress but still requires regular trips from his native Cornwall to Bristol to meet with a specialist. The stroke also severely affected Jacob’s vision, with him struggling to focus his eyes (seen right)

Pictured left in hospital, Jacob’s parents are appealing to the public to help them raise £1,000 towards the cost of taking him to Bristol for treatment. They also want to get special soft play mats to help his development. Jacob is pictured right playing with bells