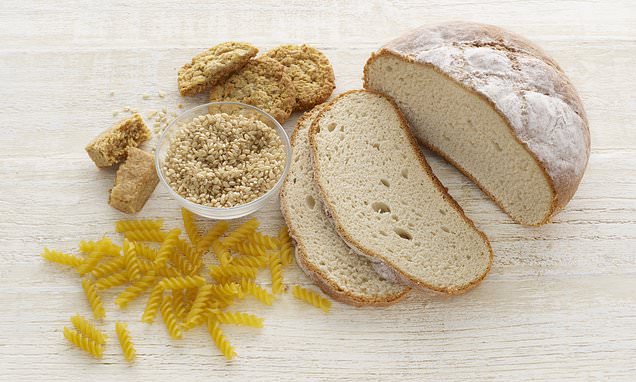 Gluten-free diets do help people to love weight – but they ‘may not be healthy’, warns new research.

Any weight loss and reduction in tummy pain are due to eating more vegetables and other fiber-rich foods – rather than cutting out the composite of proteins specifically, say scientists.

More and more people are choosing a gluten-free lifestyle – even though many are not allergic to it.

Now the first study of its kind has shown there is some merit to the trend – but perhaps not for the reasons many think. 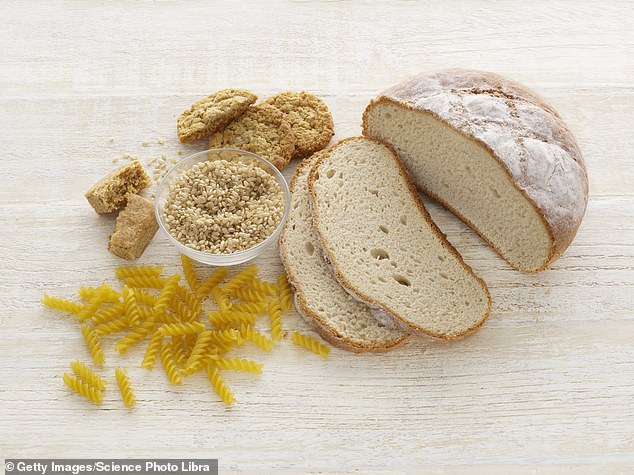 Cutting out gluten has a modest impact on weight, and also combats bloating and discomfort.

But most of the benefits may be driven by eating more by replacing wheat, rye and other grains with vegetables, brown rice, corn, oats and quinoa.

The researchers, whose findings were published in the journal Nature Communications, said this boosts ‘good’ bacteria in the gut that staves off inflammation and illness.

Senior lead investigator Professor Oluf Pedersen, of the University of Copenhagen in Denmark, said: ‘By now we think our study is a wake-up call to the food industry.

‘Gluten-free may not necessarily be the healthy choice many people think it is.’

In the study, 60 healthy middle-aged Danes were assigned randomly assigned in turn to two eight-week diets – one low in gluten (2 g per day) and the other high (18g).

They had a break in between of at least eight weks when they consumed an average 12g daily.

In comparison with the high-gluten regime the low one induced moderate changes in the intestinal microbiome – or gut bacteria – and cut self-reported bloating.

But during this the participants ate more dietary fibers – which the researchers think were responsible for the effects.

Dr Pedersen said: ‘We demonstrate that, in comparison with a high-gluten diet, a low-gluten, fiber-rich diet induces changes in the structure and function of the complex intestinal ecosystem of bacteria, reduces hydrogen exhalation, and leads to improvements in self-reported bloating.

‘Moreover, we observed a modest weight loss, likely due to increased body combustion triggered by the altered gut bacterial functions.’

Gluten is the sticky protein that gives cake its bounce and bread its chew. But sales of gluten-free products are soaring – as many decide they can’t stomach it.

Devotees, who also include Lady Gaga and Andy Murray, say it can alleviate everything from tiredness and bloating to spotty skin and hair loss.

This has sparked public debate about whether low-gluten diets should be advised for people without coeliac disease – a severe immune response to even tiny amounts.

Prof Pedersen and colleagues decided they can’t – even though some healthy individuals may prefer it to combat intestinal discomfort or excess body weight.

He said: ‘More long-term studies are definitely needed before any public health advice can be given to the general population.

‘Especially, because we find dietary fibers – not the absence of gluten alone – to be the primary cause of the changes in intestinal discomfort and body weight.

‘Most gluten-free food items available on the market today are massively deprived of dietary fibers and natural nutritional ingredients.

‘Therefore, there is an obvious need for availability of fiber-enriched, nutritionally high-quality gluten-free food items which are fresh or minimally processed to consumers who prefer a low-gluten diet.

‘Such initiatives may turn out to be key for alleviating gastro-intestinal discomfort and in addition to help facilitating weight control in the general population via modification of the gut microbiota.’

The two diets were balanced in number of calories and nutrients including the same amount of dietary fibers. But the composition of the latter differed markedly.

Based on their observations of altered food fermentation patterns of the gut bacteria, the researchers said the effects may not be primarily due to reduced intake of gluten.

A low-gluten diet has previously been proposed to diminish gastrointestinal symptoms in patients with inflammatory bowel diseases and irritable bowel syndrome which occur in up to 20 percent of the Western population.

Last year a US study of more than 110,000 people found a low-gluten diet increased the risk of a heart attack by about 15 percent.