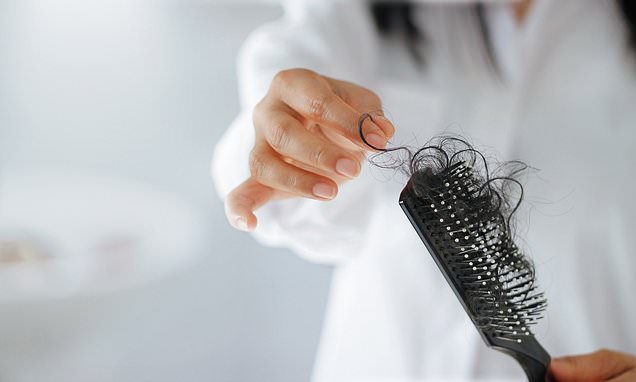 A cure for age-related hair loss may be in the pipeline, scientists have claimed on the back of a new medical breakthrough.

Researchers believe they have discovered how to reverse the process of gradually going bald by successfully regrowing hair on wounded skin.

Scientists at the New York School of Medicine activated a pathway in the brain called the sonic hedgehog.

This pathway is very active while babies are in the womb and hair follicles are being formed, but is stalled in aged or wounded skin.

Figures suggest around a quarter of men start to go bald by the time they turn 25, with Prince William starting to go thinner at just 22.

Women can also suffer with 40 per cent of females having visible hair loss by the time they are 40, according to the American Academy of Dermatology.

Collagen is a protein most responsible for maintaining the shape and strength of skin and hair.

Researchers also focused on fibroblasts due to the cells being known to help direct some of the biological processes involved in healing.

The team, led by Dr Mayumi Ito, activated the sonic hedgehog signalling pathway, which is used by cells to communicate with each other.

By sparking the communication between these cells, hair regrowth was observed within four weeks in the mice.

Hair roots and shaft structures started to appear after nine weeks, according to the trial published in the journal Nature Communications.

Scientists have until now assumed scarring and collagen build-up in damaged skin were behind its inability to regrow hair. But this evidence sheds new light.

What are the causes of hair loss?

Hair loss is common, with approximately 25 per cent of men start to go bald by the time they turn 25, according to The American Hair Loss Association.

An estimated eight million women in the UK are currently suffering from a degree of hair loss, according to a study of 2,000 women by cosmetics giant L’Oreal.

The most common type of hair loss can be triggered by life changing events such as moving home, a bereavement or pregnancy, leading to overall thinning of the hair.

With most of these, hair loss is temporary and can be helped.

Nutritionists might say that if nutrient levels are low, it will be expressed through the hair. Hair follicles rooted in the scalp need to be surrounded by a rich supply of blood to ensure they are sufficiently nourished.

Dermatologists suggest that faddy diets usually result in iron deficiency, as might avoidance of red meat. Vegetarians or vegans who are low in vitamin B12 and zinc could be prone to hair loss.

Research shows thinning hair is also linked to progestogens – the synthetic form of progesterone found in the Pill and Hormone Replacement Therapy.

Dr Ito said: ‘Now we know it’s a signalling issue in cells that are very active as we develop in the womb, but less so in mature skin cells as we age

‘Our results show stimulating fibroblasts through the sonic hedgehog pathway can trigger hair growth not previously seen in wound healing.’

Regrowing hair on damaged skin is an unmet need in medicine, Dr Ito said, because of the disfigurement suffered by thousands from trauma, burns, and other injuries.

Not only is this an advance for wounded skin, but the evidence is promising for improving hair growth in mature skin, she added.

It may help in the search for better drugs to restore hair growth.

Other experiments that turned on the sonic hedgehog pathway have uncovered a higher risk of tumours.

To avoid these risks, the team turned on only fibroblasts located just beneath the skin’s surface where hair follicle roots (dermal papillae) first appear.

With successful results, Dr Ito said this suggests that this barrier may have been overcome, bring science closer to true skin renewal after injury.

The doctors goal is to identify likely drug targets for hair regrowth. Currently, licenced drugs can have adverse side effects.

Minoxidil, an over-the-counter rub-on foam or lotion, works by increasing blood flow to the scalp, nourishing the hair follicles.

It helps about two-thirds of patients, men and women — but can have side-effects ranging from rapid heartbeat to swollen feet and stomach pains.

Finasteride, is available only on private prescription for men. It works by blocking an enzyme that converts testosterone into dihydrotestosterone (DHT), another form of the hormone that triggers baldness.

Research shows finasteride triggers some hair growth in up to 80 per cent of men, but one in 60 experiences impotence — and the risks increase the longer you’re on the drug.