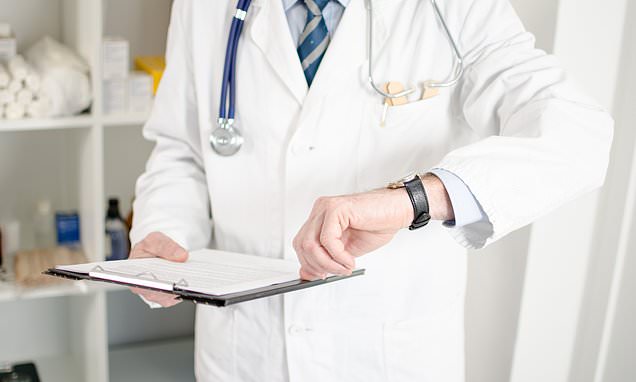 GPs have warned they are too busy ‘bean-counting’ and paperwork that they are failing to spot deadly conditions.

Family doctors are seeing a stream of patients that leaves them feeling stuck on a ‘treadmill’, according to interviews with GPs.

And they are so focused on performing to a certain criteria, they are neglecting other tasks, putting their patients’ quality of care at risk.

The study comes amid an NHS crisis, with staff shortages and practice closures reaching record numbers.

Mounting workloads over the past few years have left doctors feeling burnout and struggling to keep up, prompting many to retire early. 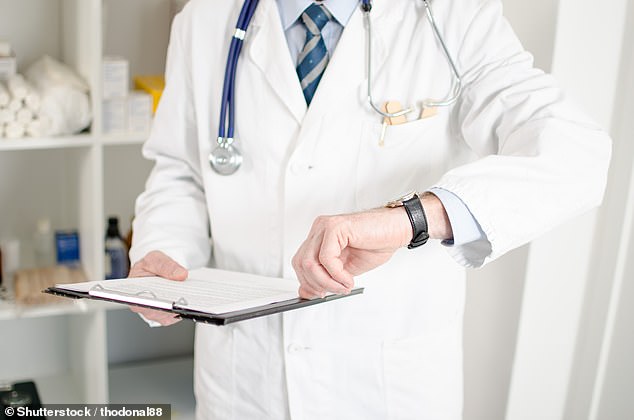 Researchers from Barts Health NHS Trust and the London School of Medicine and Dentistry quizzed 12 doctors in depth about their career since around 1970.

In the past 30 years or so, they said their work had become increasingly fast paced with too much work and responsibility, The Telegraph reports.

Many described a resentment and concern towards performance indicators in GP contracts, which were introduced more than a decade ago.

Researchers said: ‘The targets distorted the focus of clinical care on to a small number of conditions, turning clinical practice into a “treadmill”.

‘Several GPs gave examples of being so preoccupied with the “bean-counting” of targets that they were in danger of missing the obvious and serious.’

One GP described how he almost missed signs of a woman having a heart attack because he was ‘half listening’ to them while filling out forms.

Official figures showed in February that 41 per cent of GPs – around 10,000 doctors – are 50 or over and are expected to quit within the next five to ten years.

And 2.5 million patients are at risk of their local GP surgery closing because so many are relying on doctors who are close to retirement, it was last week revealed.

At the same time, fewer young doctors are choosing to specialise as GPs and are opting for other career paths as surgeons or specialists.

Many GPs are retiring in their 50s, moving abroad or leaving to work in the private sector, increasing the pressure on those who still work in the sector.

Appointment waiting times are getting longer and more people are going to A&E for minor illnesses because they can’t see a doctor.

Despite an NHS a plan to recruit 5,000 extra GPs by 2021, numbers of family doctors are falling.

And 762 GP practices across the UK could close within the next five years, according to the Royal College of Nursing.

Rachel Power, chief executive of the Patients Association, last week told The Times: ‘This is a desperate situation with potentially serious consequences for patients.’

Another said they put so much effort into targets that they are neglecting the other things ‘they could or should be doing’.

Professor Helen Stokes-Lampard, chair of the Royal College of GPs, said there wasn’t sufficient time or people to safely see the millions of patients a day.

She told The Telegraph: ‘For some, these pressures have become too much, and many GPs are becoming increasingly burnt out and are putting their own health at risk by struggling on, while others feel as though they have no choice but to leave the profession entirely.’

Despite an NHS plan to recruit 5,000 extra GPs by 2021, numbers of family doctors are falling.

Each GP interviewed felt that over time they had experienced a reduction in the control they had over their highly demanding work.

Dr Napier said: ‘This research has highlighted the importance of allowing GPs the ability to make their own decisions and providing them with additional resources, the hope is that this will lead to a reduction in job strain and improve the retention of GPs.’

It was revealed in May that some GPs are dealing with more than 100 patients a day – three times the safe limit of 60.

The average family doctor has 41 patient ‘contacts’ in a typical day, but one in 10 has more than 60 contacts and the UK’s most senior GP said she sometimes has more than 100 contacts, a survey by Pulse found.

Growing workloads mean experienced GPs are leaving the NHS, with two in five planning to retire or quit their jobs within the next five years.

Many young doctors opt to take time out or move abroad as soon as they are qualified.

The Government has said their pledge in 2015 to hire more doctors is unachievable. The most recent figures show the NHS lost 1,000 family doctors between 2015 and 2018.

At the same time, GP practices are closing at a soaring rate, which only adds to the workload.

A record 138 GP surgeries closed last year, affecting more than 500,000 patients, according to an investigation by Pulse.

The Royal College of GPs predicts 762 GP practices across the UK could close within the next five years.

An NHS spokesman said: ‘Investment in local GP and community health services will increase by £4.5billion over the next five years, helping fund 20,000 more multi-skilled staff to support GPs as part of the NHS Long Term Plan and provide a wider range of services for patients as part of our Long Term Plan, with extra therapists, pharmacists and physios based out of GP surgeries.’ 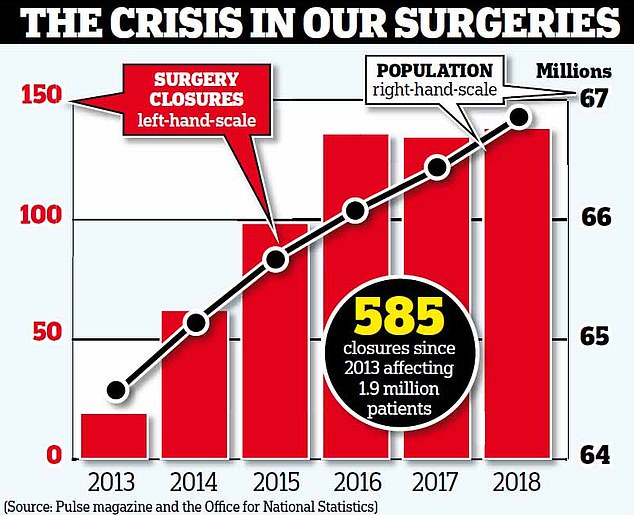 More GP surgeries are shutting down than ever before as shocking figures show 138 closed their doors in 2018, a stark rise from 18 in 2013

More than 2.5 million patients across England could see their GP surgeries close in the next five years, experts revealed in November.