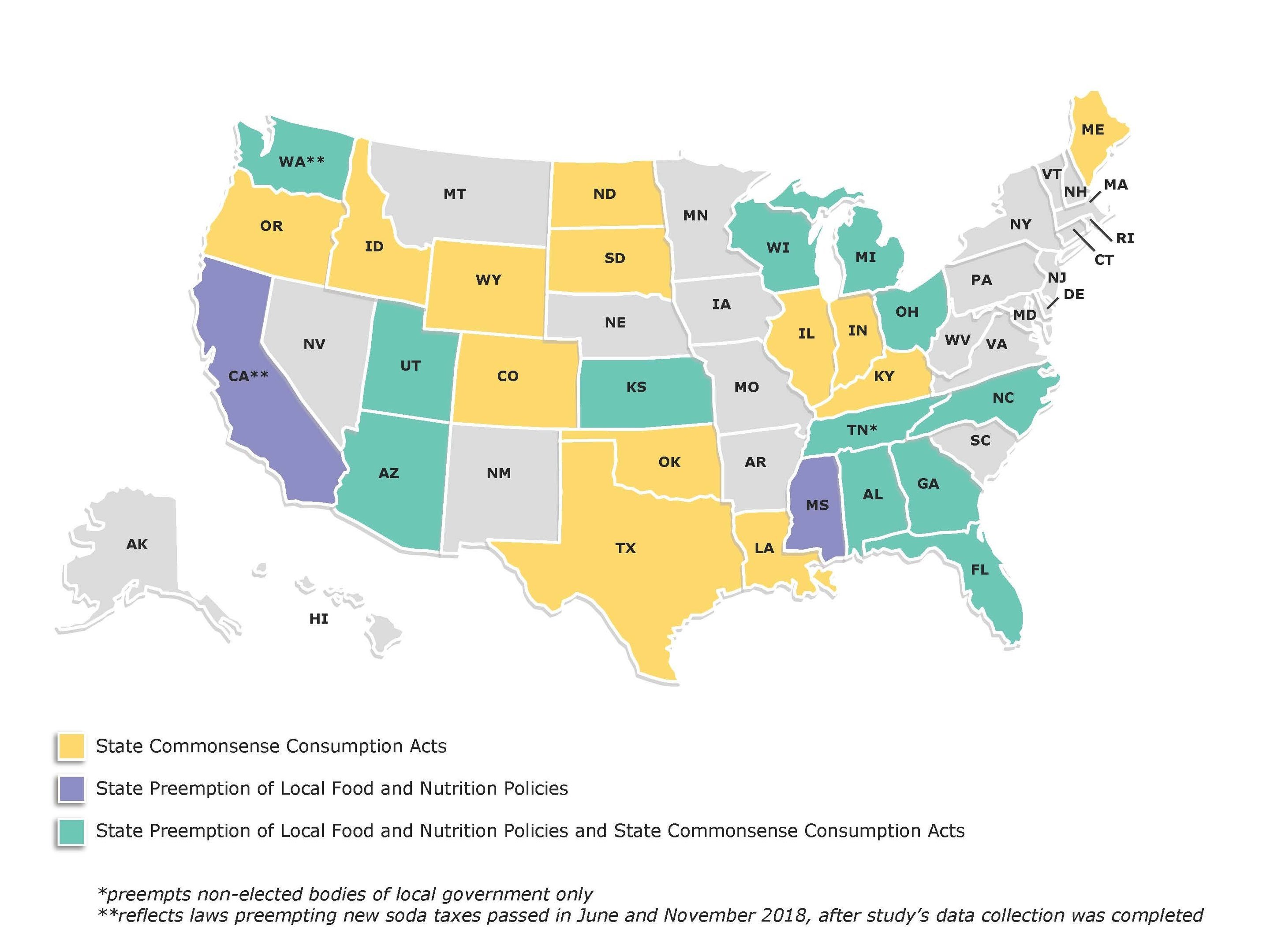 In recent years, more than a dozen states have passed laws limiting local governments’ ability to create food and nutrition policies and more than two dozen states previously enacted laws preventing obesity-related lawsuits against food businesses, finds a new analysis led by NYU College of Global Public Health. These laws are examples of preemption, a legal mechanism in which a higher level of government withdraws or limits the ability of a lower level of government to act on an issue.

The study, published online in the American Journal of Preventive Medicine, is the first to track state preemption of local food and nutrition policies and litigation—and documents a growing, industry-influenced trend to thwart public health efforts.

In the U.S., federal, state, and local governments have various legal tools to support public health and prevent diet-related disease, including enacting policies like nutrition labeling and soda taxes, as well as bringing lawsuits against businesses that produce harmful products.

Businesses may use their political strength to try to defeat public health efforts at the outset by championing preemption, and state legislatures have ceded to food industry pressure by enacting preemptive laws prohibiting both policymaking and litigation.

In their study, the researchers combed through state legislatures’ websites and several databases and search tools to identify state laws enacted through March 16, 2018, that preempt local food and nutrition policies as well as litigation based on claims that food consumption causes obesity or diet-related disease, often referred to as Commonsense Consumption Acts.

The researchers found that preemptive laws were often enacted swiftly and some were drafted by the food industry or were based on industry-sponsored model legislation. The earliest two laws (from 2008 and 2009) preempt nutrition labeling, while more recent laws (from 2017 and 2018) preempt food and beverage taxes.

An illustration of the growing focus on preempting food and beverage taxes has been seen in recent months, since this study’s data collection was completed. On June 25, 2018, California state legislators amended a budget bill to preempt local governments from adopting new soda taxes for the next 12 years. Within four days, the bill passed through both the California State Senate and Assembly and was signed by the governor on June 28—leaving little opportunity for stakeholders to organize in opposition.

In addition, similar measures to prohibit local soda taxes were on midterm ballots in Oregon and Washington. Voters in Washington passed the initiative, effectively banning future soda taxes but leaving Seattle’s existing soda tax intact, while Oregonians voted against theirs.

In addition to laws preempting new policies, between 2003 and 2013, 26 states enacted Commonsense Consumption Acts prohibiting lawsuits against food businesses based on obesity-related claims. Of these 26 states, 10 explicitly prevent government-initiated litigation including state attorneys general in most cases.

Preempting litigation can have far-reaching consequences for public health. Litigation can reveal documents that expose industry practices and litigation by state attorneys general, especially, has successfully led to industry changes in the context of food labeling, tobacco, and other products. For example, the lawsuit against the tobacco industry brought by attorneys general from 46 states, D.C., and five U.S. territories led to the largest civil litigation settlement in U.S. history (the Master Settlement Agreement), under which the tobacco industry agreed to pay billions of dollars and refrain from engaging in many advertising practices.