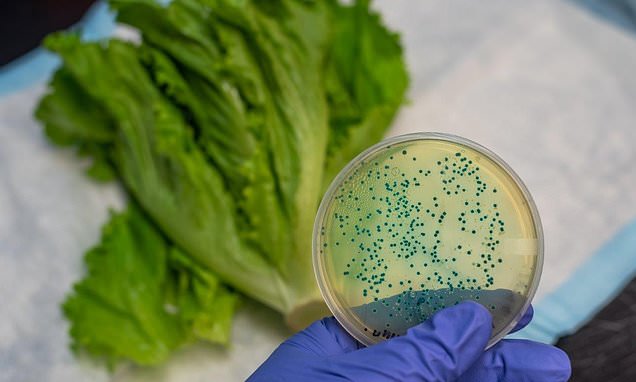 Health bosses have warned people travelling to Egypt to be careful what they eat because of a potentially deadly food poisoning bug.

At least 18 people have already caught a strain of E.coli which produces a toxin called Shiga.

While it usually only causes diarrhoea and vomiting like typical food poisoning, it can lead to a rare complication called haemolytic uraemic syndrome.

HUS, which has been diagnosed only once in England this year among people travelling from Egypt – and 16 times since 2009, can cause the kidneys to fail and end up fatal.

Holidaymakers are advised to avoid eating salads or raw vegetables, make sure their meat is thoroughly cooked and to avoid ice or tap water. 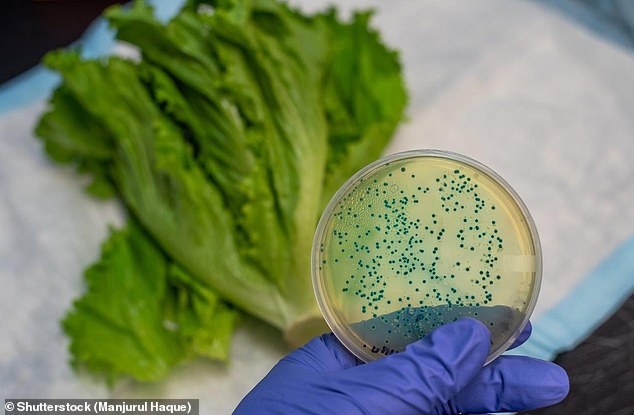 Public Health England has warned people travelling to Egypt to be careful about what they eat and to avoid salads and raw vegetables wherever possible to reduce the risk of getting infected with a dangerous strain of E.coli (stock image)

Public Health England made the announcement warning travellers, and added it could also apply to those heading to Spain or Turkey.

In Egypt, the main area of concern is the Hurghada seaside region on the country’s eastern Red Sea coast, about 290miles (462km) south of Cairo.

Everybody whose cases were recorded by PHE had been visiting this area.

‘There are simple precautions that travellers can take.

‘These include ensuring meat is cooked thoroughly, not drinking tap water or ice made from tap water and trying to avoid swallowing water when swimming.’

WHAT IS E.COLI AND WHY IS IT DANGEROUS?

E. coli (Escherichia coli) are bacteria that generally live in the intestines of healthy people and animals.

Symptoms of an E.coli infection include bloody diarrhea, stomach cramps, nausea and vomiting.

This is a condition in which there is an abnormal destruction of blood platelets and red blood cells.

According to the Mayo Clinic, the damaged blood cells can clog the kidney’s filtering system, resulting in life-threatening kidney failure.

No treatment currently exists to treat these infections. They usually disappear within one week, but medical professionals recommend resting and drinking fluids to help prevent dehydration and fatigue.

Other advice issued by the public health body included avoiding fruit which can’t be peeled and not consuming unpasteurised milk, cheese or cream.

E.coli – full name Escherichia coli – is a bacterium which is commonly found in the intestines or humans and animals and is usually harmless.

Some strains of it, however, can cause unpleasant food poisoning. The main symptoms of infection include diarhhoea and vomiting, which tend to pass within a few days without medical treatment.

Very young or old people, however, could develop HUS. Although this is rare its consequences can be dire.

HUS causes the destruction of red blood cells in tiny blood vessels which are damaged by the infection, and may cause abdominal pain and blood in the faeces.

More severe effects may include anaemia, temporary kidney failure but permanent damage, and damage to the brain, gut, heart, liver or pancreas.

Dr Phin added: ‘Anyone suffering from diarrhoea and vomiting should ensure they keep well hydrated and seek medical advice if their symptoms don’t improve within 48 hours.

‘They should also avoid preparing or serving food while they have symptoms and thoroughly wash their hands after using the toilet to stop the bug being passed to others.

‘Individuals with symptoms after returning from holiday should seek medical advice from their GP or NHS 111.’