How singer Alexandra Burke won her secret battle against crippling IBS: Star admits she is amazed that it took her so long to seek help for crippling belly condition

For the past decade, singer Alexandra Burke has been known for her powerful vocals and stage presence. But in truth, she has often felt anything but powerful.

That’s because, for years, she has been locked in a private battle with irritable bowel syndrome (IBS), which has caused excruciating abdominal pain, constipation and bloating that could be ‘crippling’ when she was performing.

‘I was trying to ooze confidence but actually just wanted to curl up in a ball,’ says Alexandra, 33.

It was only last year, when her symptoms reached a new intensity while rehearsing for a tour of the show Joseph And The Amazing Technicolor Dreamcoat, that Alexandra finally sought medical help and was diagnosed with IBS. 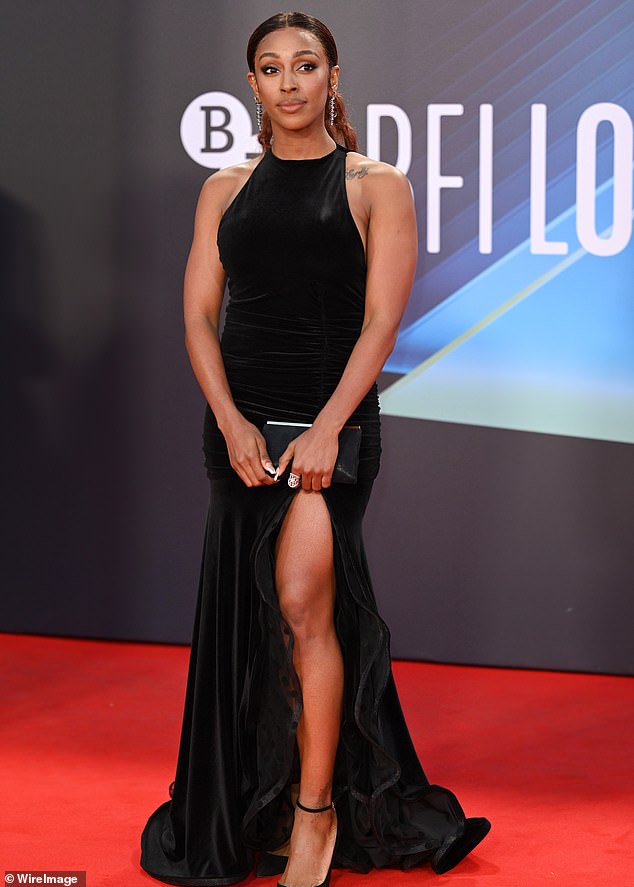 For the past decade, singer Alexandra Burke has been known for her powerful vocals and stage presence. But in truth, she has often felt anything but powerful

The condition affects between 10 per cent and 25 per cent of the UK population. It’s more prevalent among the under-50s and often appears first in people in their teens or 20s.

Looking back, Alexandra admits she’s amazed it took her so long to seek help.

‘All the signs were there — the pain, cramping and bloating which followed every meal — but I didn’t realise it was IBS,’ says Alexandra, who is talking publicly about her condition for the first time. ‘As a person in the public eye, you want to uphold this perfect image.’

But she regrets not consulting her GP sooner. ‘I didn’t want to trouble her with something I thought so many people were experiencing,’ she says.

Instead, she tried limiting her food intake, ‘eating only salads and keeping things really low-calorie’, and eliminating wheat and dairy from her diet to improve her bloating and discomfort.

‘I had a blood test some years ago which showed that I can’t digest dairy and wheat properly — in common with many Caribbean people — but I still had IBS symptoms,’ she says.

She also switched to a plant-based diet and, as part of a general bid for health and fitness, worked out with her partner, West Ham footballer Darren Randolph, 35, with whom she lives in Hertfordshire.

Yet when she finally saw her doctor, a simple treatment eased her symptoms within days.

Standard IBS treatments include fibre supplements or laxatives (for those with constipation), or anti-diarrhoea medications.

Antidepressants called tricyclics, which work by inhibiting chemical messengers to slow the movement of the gut, can also help.

Researchers at the universities of Leeds and Bristol are working with GPs on a trial to see if very low doses of tricyclics (a tenth of the normal amount) can ease the discomfort of IBS — potentially paving the way for them to be more widely used. 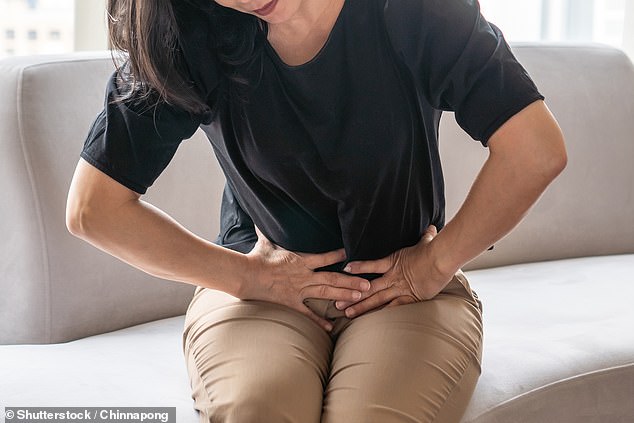 The condition affects between 10 per cent and 25 per cent of the UK population. It’s more prevalent among the under-50s and often appears first in people in their teens or 20s. A file photo is used above

Selective serotonin reuptake inhibitors (SSRIs), another type of antidepressant (e.g. Prozac), can be used to block pain messages between the brain and the gut. However, official guidance states that antidepressants must be used only where other IBS treatments have failed.

Alexandra’s GP, who also has IBS, recommended a tactic that works for her: probiotics, or ‘friendly’ gut bacteria supplements.

These are thought to help by restoring the natural balance of bacteria in the gut. Studies show changes in the gut microbiome (the trillions of micro-organisms that live in the intestinal tract) can trigger inflammation and pain.

The NHS does suggest trying probiotics, but warns that over-the-counter products may lack the potency of the pharmaceutical-grade probiotics that have shown promise in trials.

Probiotics had a swift effect for Alexandra — but only after a lot of trial and error. ‘I’d tried several in tablet form, but I’d never felt any reduction in my discomfort,’ she says. Only the product her GP recommended (Symprove, a fruit-flavoured daily drink costing around £2.80 a day) was effective.

But Alexandra also had to address her long-seated anxiety, a condition closely linked to IBS.

A major review by scientists at the First Hospital of Lanzhou University, in China, and published in the World Journal of Gastroenterology in 2014, concluded that IBS is a ‘combination of irritable bowel and irritable brain’.

It said that stress and anxiety early in life could trigger both overactivity in the gut, leading to diarrhoea, and underactivity, which slows normal gut function, resulting in constipation.

More recently, an international study of more than 50,000 people with IBS, published in Nature last November, concluded that IBS and anxiety may have a similar genetic root. DNA analysis showed the same genetic make-up that increased the risk of IBS also increased the risk of anxiety, depression and insomnia.

Professor Miles Parkes, a consultant gastroenterologist at Addenbrooke’s Hospital in Cambridge, and a senior investigator on the study, told Nature: ‘Although IBS occurs more frequently in those who are prone to anxiety, we don’t believe that one causes the other.

‘Our study shows these conditions have shared genetic origins, with the affected genes possibly leading to physical changes in the brain and symptoms in the gut.’

In gut disorders such as IBS, anxiety and depression appear to lower the pain threshold, ‘so patients react to pain which wouldn’t bother other people’, according to Ingvar Bjarnason, a professor of digestive diseases at King’s College London.

‘Anxiety is quite a dominant feature in perhaps 50 per cent of cases of IBS, which is why the normal treatment involves anxiety-reduction therapies,’ he told Good Health.

He was involved in a 2011 study at King’s College London, in which 186 IBS patients, who failed to respond to conventional treatments, were given either the Symprove probiotic drink or a dummy treatment. The results showed that 60 per cent of those on Symprove saw their symptoms ease versus little or no response in the placebo group.

Alexandra, who admits to having ‘been a worrier from a young age’, has suffered with anxiety for years, despite her happy childhood. She blames it on being a ‘perfectionist’ who ‘stresses over everything’.

But there have been other factors, too. Her late mother — Melissa Bell, a singer with the 1980s band Soul II Soul — died of kidney failure in 2017, aged just 53. Then there was Alexandra’s heavy performing schedule and dealing with the stress of the pandemic.

She says: ‘There was no relief at all from my symptoms. I was bloated and in agony all the time.’

Her reluctance to seek medical help is surprisingly common; the National Institute for Health and Care Excellence (NICE) says that although 3.9 million people in the UK have sought medical help for their IBS, around twice that number self-treat.

This could be because for many the condition is intermittent.

‘It can come on really badly for two or three months and then go away — in the milder cases, for years — without treatment,’ says Professor Bjarnason.

This was certainly the case for Alexandra, who says she sometimes ‘really struggled’ but ‘at other times I was doing OK’.

When doctors in ancient Greece examined a patient, they noted where they lived and what the weather was like, as climate was thought to affect disease, and they were right. ‘Over half of the most common infections in England and Wales display a strong seasonal pattern — for example, every 1c rise in temperature over 6c increases the risk of salmonella (a common cause of food poisoning) by 12.5 per cent,’ says Dr Mark Cherrie, an expert in environmental epidemiology at the Institute of Occupational Medicine in Edinburgh.

While rotavirus — which causes diarrhoea and vomiting — thrives in cooler temperatures, the bacteria that cause salmonella flourish when it’s warm.

Salmonella infections also peak during the summer months, because we tend to eat outside more and this lowers our food hygiene standards.

In her teens and early 20s, she didn’t pay much attention to gastric discomfort (initially blaming portion sizes in America while she was living in there, in 2013, when she was 25), but with hindsight she realises she had suffered from bloating ‘for as long as I can remember’.

Her symptoms really kicked in when she returned to the UK in 2014 and starred in The Bodyguard in the West End, with a heavy schedule of performances and rehearsals — and stress.

‘My bloating would happen after eating most things, my tummy bulging as though I’d just had a huge pasta meal,’ she says. She began skipping meals — and eating her main meal after the show.

By July 2021 — while filming for Pretty Red Dress and rehearsing a very energetic role as the narrator in Joseph at the London Palladium — it had all become too much.

Alexandra finally consulted her GP, who diagnosed IBS and recommended the daily probiotic. Within a fortnight, her constipation, pain and bloating were all reduced.

‘The anxiety has eased; I’ve taken on life coaching which has given me the tools to manage my worries,’ she says.

‘I do yoga, switch off from my phone one day a week and write down things I’m grateful for.’

Now the proud mum of a baby boy born last month, Alexandra says: ‘For so long I didn’t feel like myself and now, with no flare-up of my symptoms, I feel like I’m back to my full happiness.’