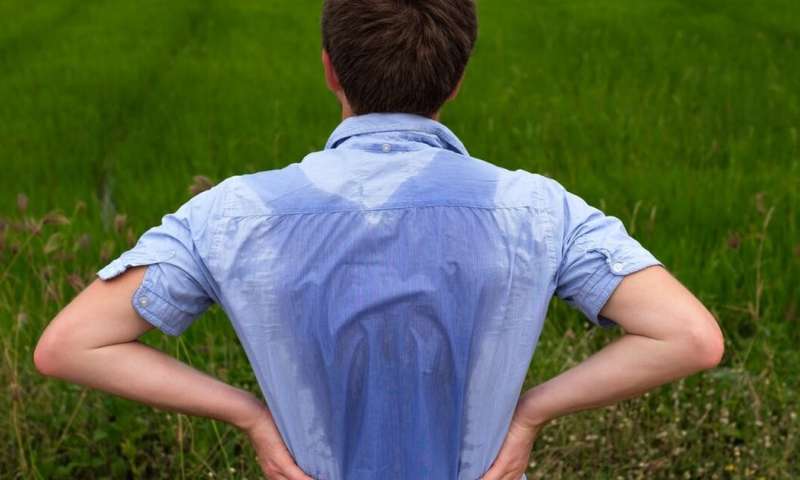 Most people sweat when they exercise or the weather is hot. But some people sweat far more than this. Hyperhidrosis – excessive sweating – can be a devastating condition that has a huge impact on quality of life, and even prevent those who have it from carrying out everyday tasks. For some it has affected their relationships. Others are so embarrassed by their sweating that they feel unable to leave their house.

Sweating is a normal physiological process that helps the body to regulate its temperature. When we get too hot or exercise, sweat evaporates from the skin and has a cooling effect. People often also notice they sweat when they are anxious or are in a situation that makes them nervous. But for the roughly 3% of people who have hyperhidrosis, sweating can be almost constant.

It is not known what causes hyperhidrosis, although it is thought that the nerves that usually make us sweat become over-active. Hyperhidrosis often starts in childhood or adolescence, but can start at any time during life. There is probably a genetic element as well, as there is often a family history in people who have excessive sweating of the hands.

Without a clear understanding of what causes hyperhidrosis, it is more challenging to find effective treatments. That is why colleagues and I have been researching the condition. We asked people with hyperhidrosis and healthcare professionals who treat them what questions they would like research to answer. We had 268 people come forward to suggest nearly 600 research questions.

We found that hyperhidrosis has a wide range of severity. At the mild end of the spectrum, the effects may be minimal – a small inconvenience or minor embarrassment. But as severity increases, the impact on quality of life becomes much more substantial. And the condition can have a huge impact on quality of life, affecting people’s career choices and leading to social isolation. For example, some people have such sweaty hands that it makes it difficult to hold a pen or use a keyboard.

People with hyperhidrosis often have anxiety in work situations such as job interviews or meetings where they might be expected to shake hands. Their social life can also be affected, with many people feeling embarrassed by their sweating, and some people have avoided forming intimate relationships due to this. Some people have to change their clothes several times.

Many people with hyperhidrosis don’t seek medical help due to the stigma of the condition. They may not even know it is a medical condition at all. Those that do often report difficulties in being taken seriously, lack of access to specialists, and treatment being considered a low priority.

There are a number of treatments available for hyperhidrosis, which depend upon the area of the body affected. Temporary treatments include:

But these are all temporary, and do not work for everyone. The anti-perspirants can cause skin irritation, and oral medication blocks nerve endings throughout the body, so can cause side effects such as a dry mouth and problems urinating. Botox and iontophoresis, meanwhile, need to be repeated regularly and can be expensive.

There are also some more permanent solutions available. Some sufferers have had surgery to remove or destroy sweat glands in a localised area (such as the armpits) or endoscopic thoracic sympathectomy (ETS), where the nerves that control sweating are cut. ETS is effective in reducing the sweating of the areas intended, but can lead to very serious side effects such as damage to nerves or organs. Most patients end up with some level of sweating in other areas (compensatory sweating) and this can be worse than the original problem, so this surgery is generally only used as a last resort. A newer permanent treatment uses electromagnetic energy to destroy sweat glands.