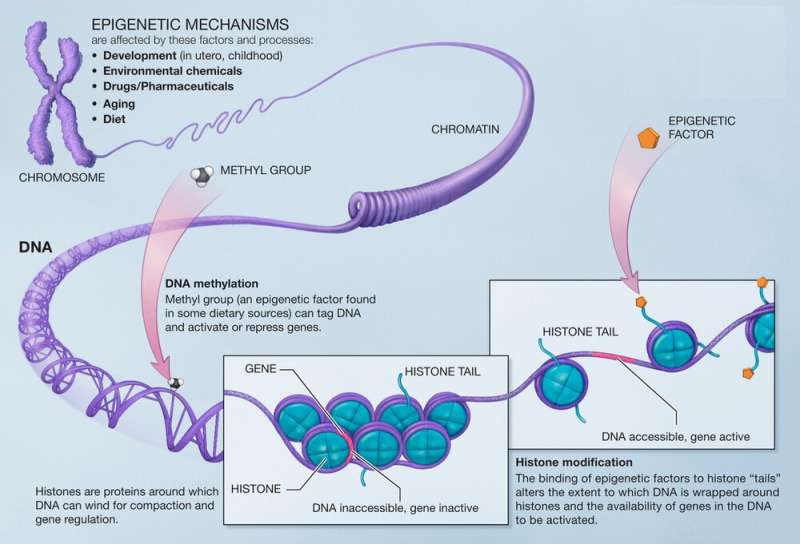 Amyotrophic lateral sclerosis is a devastating neurodegenerative disease that affects about 1 in 50,000 people. Well-known people who suffered from ALS include baseball player Lou Gehrig, who lived two years after he was diagnosed, and scientist Stephen Hawking, who lived for an extraordinary 55 years after his diagnosis. While the severity and speed of disease progression vary from person to person, most people with ALS die within two to five years after diagnosis. No effective therapy currently exists.

Little is known about what causes or increases someone’s risk of developing ALS. Researchers think it’s only around 50% genetic, indicating that there are strong environmental and lifestyle risk factors affecting disease development. But very few of these risk factors have been identified.

We are a team of neuroscientists with a special interest in epigenetics, the study of how the environment influences DNA. By examining the epigenetics of ALS, we found that differences in metabolism, cholesterol and immunity may play a role in disease progression.

Epigenetics opens a window into the role environmental factors play in genetic diseases like ALS. One common type of epigenetic mechanism is DNA methylation, an on-off switch for certain regions of DNA that shift throughout a person’s lifetime. The ways these on-off patterns change are known to be shaped by environmental and lifestyle factors.

To unravel how DNA methylation affects ALS, we analyzed DNA samples and lifestyle questionnaire responses from almost 10,000 patients with and without ALS. This data was collected by Project MinE, an international initiative creating a database of the genetic profiles of ALS patients.

We discovered differences in methylation patterns between people with ALS and people without ALS in 45 DNA regions. When we examined the specific genes located in these areas, we found that people with ALS mainly showed differences in methylation on genes that play a role in metabolism, cholesterol production and immunity. These findings support a recent Project MinE study that showed a causal link between high cholesterol levels and ALS.

Our team also examined DNA methylation patterns that reflect exposure to certain environmental or lifestyle factors (such as smoking or high body mass index), or biological processes (such as aging). Even after controlling for the effects of these other common risk factors, we found that metabolism, cholesterol and immunity were still associated with ALS.

Changes in methylation patterns for multiple DNA regions, and especially those related to immune processes, were also associated with survival rates for people living with ALS.

Currently, no cure exists for this devastating and deadly disease. Our study helps clarify the biological processes that underlie ALS risk factors and disease progression, and could potentially be used to develop new treatments or preventive interventions.