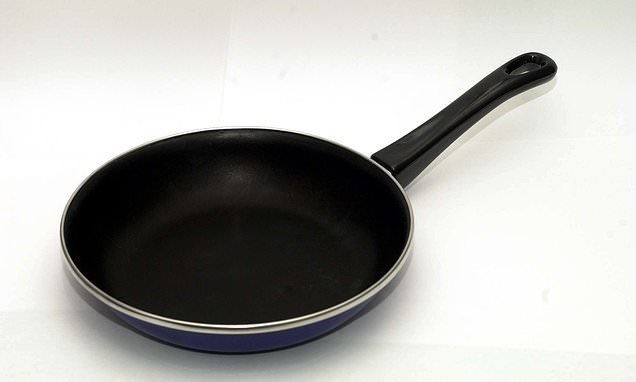 Men’s penises are half-an-inch SMALLER if they are exposed to high levels of chemicals in non-stick frying pans and fast food packaging, study finds

Men could end up with penises half-an-inch shorter than usual if their parents were exposed to high levels of a chemical used in non-stick frying pans.

Scientists have found the chemicals, called PFCs, can interfere with male hormones and lead to sexual organs being ‘significantly’ shorter and thinner.

And this effect is not only seen in the womb, the researchers said. PFCs could have toxic effects in teenagers, too.

The chemicals, also found in waterproof clothing and greaseproof packaging for food, get into the bloodstream and reduce testosterone levels.

Scientists found young men who grew up in an area polluted with PFCs have penises 12.5 per cent shorter and 6.3 per cent thinner than healthy men. 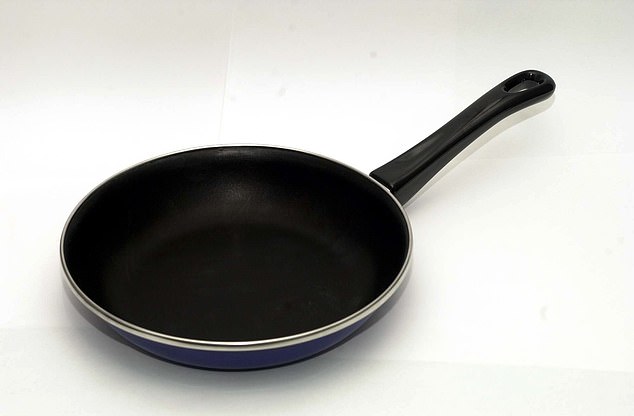 Chemicals called PFCs are common in everyday items and, notably, used to be used to make the Teflon coating for non-stick frying pans – but researchers in Italy have found they could be absorbed by the body during youth and make men’s penises smaller

Researchers at the University of Padua in Italy made the discovery after measuring the penises of 383 men with an average age of 18.

Padua, near Venice, is in one of four areas in the world known to have high levels of PFC pollution, which used to be used in Teflon coating until it was phased out in 2013.

The chemicals, officially called perfluoroalkyl compounds, are also a health hazard in Dordrecht in the Netherlands, Shandong in China, and West Virginia in the US.

The Italian researchers found PFCs will bind to testosterone receptors and reduce levels of the male sex hormone used in the body.

As a result, men grow up with smaller penises, less healthy and mobile sperm and a shorter distance between their scrotum and anus – a sign of lower fertility.

‘As the first report on water contamination of PFCs goes back to 1977, the magnitude of the problem is alarming,’ said the researchers, led by Dr Andrea Di Nisio.

‘It affects an entire generation of young individuals, from 1978 onwards.’

PFCs come in hundreds of forms and are widely used to make everyday products more convenient and longer-lasting.

But their toxic and potentially cancer-causing effects are only in the early stages of being understood by scientists.

TOXIC PFCs ARE IN WATER SUPPLY OF MILLIONS OF AMERICANS

More than six million people in the US drink and use water that is contaminated with deadly toxins, a study revealed in 2016.

Life-threatening concentrations of carcinogenic man-made chemicals PFASs, a type of PFC, were found in public water tanks across America.

The chemical is normally used to fight fire, insulate pipes, and stain-proof furniture.

The Harvard University study warned the figures are likely underestimates, since government data does not account for a third of the country – and therefore omits around 100 million people.

PFASs have been used over the past 60 years in industrial and commercial products ranging from food wrappers to clothing to pots and pans.

They have been linked with cancer, hormone disruption, high cholesterol, and obesity.

Safety officials have yet to find a way to remove PFASs from wastewater by standard treatment methods.

The chemicals can get into the body by being absorbed by the intestines from food and drinking water, or be breathed in.

From here they get into the bloodstream and can be toxic for foetuses when consumed by the mother and for teenagers, who undergo big hormonal changes.

For men, being exposed to PFCs while in the womb can result in higher levels of female hormones in adulthood, and developing smaller penises.

All were from the Veneto region of Italy, but were categorised by whether they lived in a red, yellow or green zone based on levels of PFC pollution.

Part of the region is highly polluted because run-off from a chemical factory and wastewater treatment plant made it into a major river and the drinking water.

The non-exposed men (green zone) had an average flaccid penis length of 10cm (3.9ins) – measured along the top from body to tip – while the men in the polluted areas were just 8.75cm (3.4ins) long.

Their penises were thinner, too, but by a smaller margin: the healthy men measured 10.3cm (4ins) in circumference compared to 9.65cm (3.7ins) for the polluted penises.

Dr Di Nisio and his team said not much can be done about the problem until PFCs are banned or phased out, and even then the problem is likely to continue.

PFCs are highly stable chemicals and the ones already released into the environment are expected to remain there for longer than the human species.

‘This study documents that PFCs have a substantial impact on human male health as they directly interfere with hormonal pathways potentially leading to male infertility,’ the researchers wrote.

And Dr Di Nisio told IFL Science: ‘At least here in Italy, it is very difficult to know if a product contains these chemicals.

‘In the case of a product where it is explicitly stated “PFOA-free”, I do not feel safe anyway, because PFOA is only one of hundreds of possible PFC compounds, and they can all be dangerous.

‘Therefore it is very hard to avoid any contact with any PFC.’

The research was published in the Journal of Clinical Endocrinology and Metabolism.