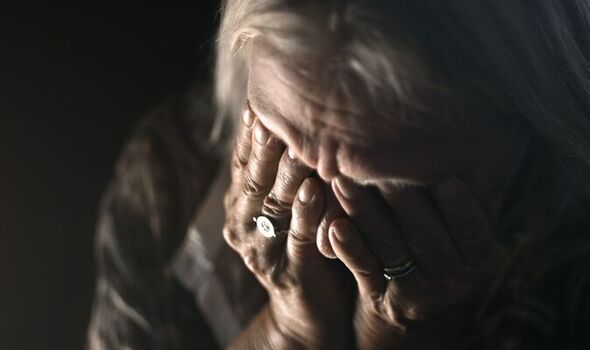 Campaigners warn that this winter could be the tipping point for many alone who are battling anxiety and depression. The decades-long crisis is set to spiral out of control as dark cold months, seasonal infections and loneliness take their toll.

The latest data shows 75 percent of those aged 70 and over and 75 percent of people aged 50-69 are worried about the deepening cost-of-living crisis.

Meanwhile, more than half are worried about new Covid variants while one-third still panic about the consequences of the disease.

The impact is most severe for a generation which is often unwilling to speak up and seek help.

Today on World Mental Health Day Caroline Abrahams, Age UK’s Charity Director, warned: “It’s heartbreaking to think some older people may be experiencing anxiety, depression or severe mental health problems and are not reaching out to get the help that they need and deserve.”

She said older people who have felt low for a few weeks should call their GP, and added that NHS talking therapies had a higher success rate for older people, but they were typically under-referred.

Official figures show that in 2021/22 just 5.6 percent of referrals to NHS talking therapies were for people over 65, despite this age group making up nearly 20 percent of the population and being just as likely to experience common mental health problems.

Ms Abrahams added: “The good news is that we can all do our bit to help though by reaching out to older relatives, and friends for a chat over the phone or a face-to-face visit. For anyone hard of hearing, a letter may be hugely welcome.

For those online, video calls offer a world of opportunities to stay in touch. Simple actions like these can do more good than you will ever know.”

Earlier this year former Health Secretary Sajid Javid acted after the Daily Express launched its By Your Side Campaign to shatter taboos and put mental health at the heart of the national conversation.

He called it “brilliant at raising awareness of this issue” but wanted sufferers and those on long waiting lists to speak up.

Opening a consultation on plans for reform in the wake of the Covid crisis he asked people to submit evidence of their experiences. The review into the parlous state of the nation’s well-being comes as three in five said their mental health had deteriorated during lockdown, and one-third did not seek help.

There are around 1.6 million people stuck on waiting lists for mental health treatment and around 800,000 adults and 450,000 children and young people for secondary services.

Just one-third of children who need mental health support are receiving it. Official data also shows a record number of under- 18s are now seeking help.

Mr Javid said: “The By Your Side campaign the Daily Express has been running has done brilliant work to raise awareness of this issue. It’s been really encouraging to see more conversations taking place about mental health and this campaign will help so many people.

“It’s so important to me that mental health and physical health are treated with the same urgency. My message is clear – it’s OK not to be OK. Please reach out, and help is here for you.”

The World Health Organisation recognises depression and anxiety have risen because of stress and isolation during the pandemic.

WHO director-general Tedros Adhanom Ghebreyesus said: “The information we have is a wake-up call to all countries to pay more attention to mental health.”