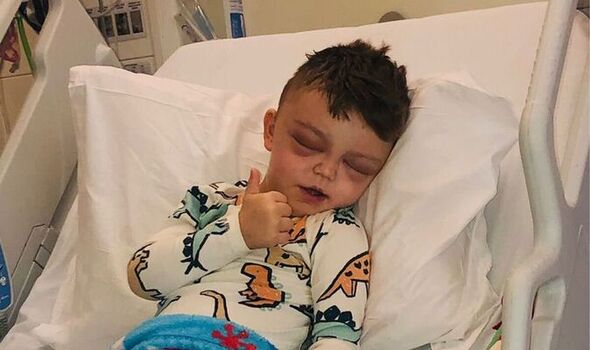 A mother has shared her despair after her son began complaining of headaches, causing her to think he might need prescription glasses. However, she soon realised that the real reason was much more sinister.

Even in her worst nightmares, Sophie could never have imagined five-year-old Lenny was actually suffering from an aggressive form of brain cancer – throwing the family’s life into turmoil.

“The doctor took us into the family room at hospital and told us,” the 33-year-old told the Manchester Evening News. “I can’t even explain it; I went into complete devastation mode. I didn’t know what to do. He was in the other room waiting for us to come back with news.

“It’s just a mother’s worst nightmare. It’s your child, your baby. You do everything you can for them.”

It all started when Lenny, from the Reddish area of Stockport, began experiencing headaches and fatigue in early September. Concerned over his sleepiness, 33-year-old Sophie took him to see a doctor for blood tests. The results came back normal and medics believed Lenny may have had low iron levels.

But as his headaches worsened, Sophie took Lenny for a routine eye check, thinking he may have needed glasses. The mum-of-two was then told the youngster would need to be referred for further tests – with the closest appointment being three months away. Sophie, who works as a carer, was so concerned by this point she decided to book Lenny in with a private optician. Scans showed the nerves behind his eyes were swollen and the family were sent to Stepping Hill Hospital.

Unfortunately, a CT scan there discovered a tumour the size of an adult fist on Lenny’s brain. He was rushed for surgery and the high-grade glioma was removed just days later on October 30.

High-grade gliomas are tumours of the glial cells, cells found in the brain and spinal cord. They are called “high-grade” because the tumours are fast-growing and they spread quickly through brain tissue, which makes them hard to treat. The tumours occur in children of all ages, from infants to adults.

The devastated family are set to have a meeting at The Christie on Monday (November 21) where a chemotherapy plan will be set out for Broadstone Hall Primary School pupil Lenny.

“It’s an aggressive, high-grade glioma tumour so the treatment isn’t very successful,” Sophie added. “It’s just a rollercoaster of emotions. From the minute you wake up, you have to be strong for him.

“At the moment, he’s the most well he’s been for months and months leading up to the symptoms. He doesn’t know what’s going on; the tumour was in quite an accessible place. They removed the majority of the cancer which is good, it’s a clean slate to start the chemotherapy. It’s just an aggressive form of cancer which is why it’s frightening.

“I just can’t believe he was only in intensive care for 24 hours. The doctors are amazed at how he’s recovered from the operation. That’s the one thing that’s kept us going to be fair.

“It’s not just affected me, it’s all of my family – my sister and my dad. It’s just pain. It’s just so unbearable, you can’t even imagine.”

A fundraiser has been set up to help Lenny and his family through this devastating time. To donate, follow the link by clicking here .