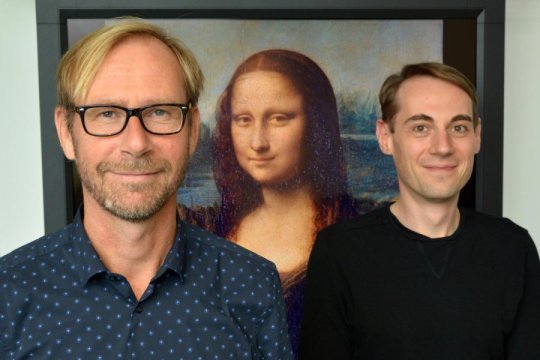 In science, the “Mona Lisa Effect” refers to the impression that the eyes of the person portrayed in an image seem to follow the viewer as they move in front of the picture. Two researchers from the Cluster of Excellence Cognitive Interaction Technology (CITEC) at Bielefeld University demonstrate that, ironically enough, this effect does not occur with Leonardo da Vinci’s world-famous painting “Mona Lisa” — debunking a scientific legend. The researchers are presenting the results of their study in the scientific journal i-Perception.

“People are very good at gauging whether or not they are being looked at by others. Perceptual psychology demonstrated this in the 1960s,” says Professor Dr. Gernot Horstmann. Dr. Horstmann is a member of the Neuro-Cognitive Psychology research group at Bielefeld University’s Department of Psychology and the Cluster of Excellence CITEC. Horstmann specializes in eye movement and attention, and is one of the two authors of this new study.

“People can feel like they’re being looked at from both photographs and paintings — if the person portrayed looks straight ahead out of the image, that is, at a gaze angle of 0 degrees,” explains Horstmann. “With a slightly sideward glance, you may still feel as if you were being looked at. This was perceived as if the portrayed person were looking at your ear, and corresponds to about 5 degrees from a normal viewing distance. But as the angle increases, you would not have the impression of being looked at.”

“Curiously enough, we don’t have to stand right in front of the image in order to have the impression of being looked at — even if the person portrayed in the image looks straight ahead,” says Dr. Sebastian Loth. Dr. Loth is a member of the Social Cognitive Systems research group, which is part of the Faculty of Technology and CITEC. “This impression emerges if we stand to the left or right and at different distances from the image. The robust sensation of ‘being looked at’ is precisely the Mona Lisa effect.”

In his research on communication with robots and avatars, Loth repeatedly encountered the term “Mona Lisa Effect,” coined after the famous 16th century oil painting. “The effect itself is undeniable and demonstrable,” says Loth. “But with the Mona Lisa, of all paintings, we didn’t get this impression.”

In order to test this observation, Horstmann and Loth had 24 study participants look at the Mona Lisa on a computer screen and assess the direction of her gaze. The participants sat in front of the monitor. A simple folding ruler was positioned between them and the screen at several distances. The participants indicated where Mona Lisa’s gaze met the ruler. In order to test whether individual features of Mona Lisa’s face influenced the viewers’ perception of her gaze, the researchers used 15 different sections from the portrait — starting from her entire head to only her eyes and nose. Each image was shown three times in random order. Halfway through the session, the researchers also changed the distance of the ruler from the monitor. Horstmann and Loth gathered more than 2000 assessments this way — and almost every single measurement indicated that the Mona gaze is not straight on but to the viewer’s right-hand side. The result: “The participants in our study had the impression that Mona Lisa’s gaze was aimed to their right-hand side. More specifically, the gaze angle was 15.4 degrees on average,” says Gernot Horstmann. “Thus, it is clear that the term “Mona Lisa Effect” is nothing but a misnomer. It illustrates the strong desire to be looked at and to be someone else’s centre of attention — to be relevant to someone, even if you don’t know the person at all.”

Gaze direction plays an important role in designing virtual characters or avatars for assistive systems or computer games. “When communicating with an avatar, for example in a virtual environment, gaze improves our understanding of the avatar,” says Sebastian Loth. “Using their eye gaze, the virtual agent can express its attention, and it can point at objects that are or will become relevant to the task — just like a human.”