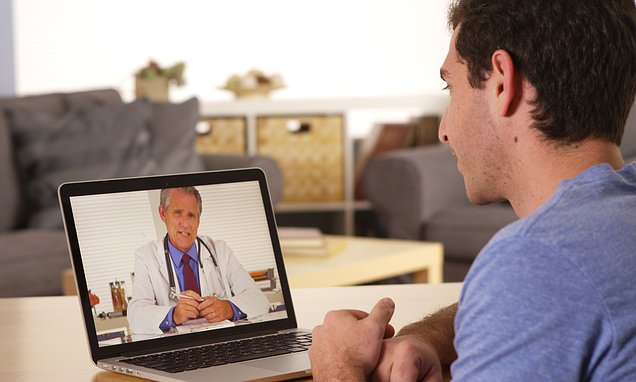 Patients in the UK could Skype doctors from foreign countries as far as India under radical plans to cut down NHS waiting times.

Technology is making it easier to use doctors across the globe, the General Medical Council (GMC) said in a report.

The proposals come after figures last week revealed the true extent of the crisis, with millions of patients unable to see their GP for up to four weeks.

The GMC also warned that the NHS is ‘at the brink of a breaking point’ trying to deliver patient care. 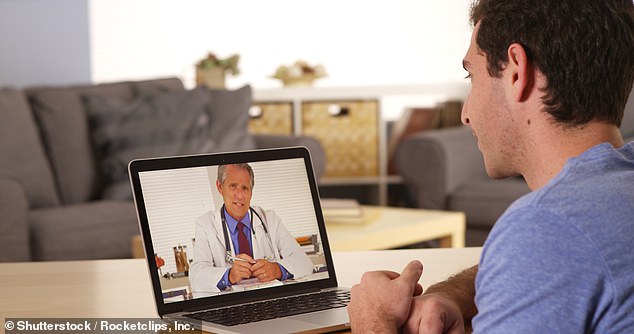 Patients in the UK could Skype doctors from foreign countries as far as India under plans to cut down NHS waiting times, a report from the General Medical Council has proposed

The report painted a stark picture of the pressure on doctors, many of whom are considering career changes to step away from the heavy workload.

A survey of 2,600 UK doctors, included in the report, found that within the next three years, a fifth are considering going part time.

A further fifth plan to leave the UK to work abroad, which experts have labelled as ‘concerning’ for the industries’ future.

To combat the issue, the GMC said: ‘With advances and developments in technology and telemedicine, we are exploring how to maximise the longer-term potential for internationally based doctors to treat UK patients, with the same assurance on standards as when the care is provided by UK based doctors.’

It does not specify which countries officials may use, however figures show the second highest nationality of doctors currently working in the NHS is Indian.

In February, 18,348 Indian staff were employed, compared to 976,288 British staff, according to The House of Commons Library.

The NHS have staff from 202 nationalities, with 6,000 foreign doctors hired in 2016, despite the ongoing concerns of language barriers.

WHAT COUNTRIES DO MOST OF THE STAFF WORKING IN THE NHS COME FROM?

NHS Digital data shows exactly how many staff from 202 nationalities there are working in the health service. The figures are correct as of September 2017.

In light of the recent GMC proposals, critics are wary of outsourcing medical professionals furthermore.

They suggest it puts lives at risk as the level of training is not to the same standard.

General Practitioners Committee (GPC) chair Dr Richard Vautrey said it was the ‘GMC’s responsibility to ensure that whenever a doctor is providing care to a patient in the UK they are competent to do so.

‘The reality is that with the internet there are no geographical boundaries in the way that was the case 10 years ago,’ he told GP Online.

‘We need to look at how to address the workforce in this country,’ Dr Nigel Watson, who is leading a review of GP services, said.

He added that outsourcing ‘has not always gone well’.

But the GMC warn ‘the NHS as a whole is at a critical juncture’, and planning for a workforce in the right places, with the right skills, is urgently needed.

Among a uncertainty about Brexit, NHS England has been widening its recruitment net, encouraging applications from overseas, including Australia.

It comes after NHS figures last week revealed a fifth of patients trying to make an appointment with their family GP have to wait two weeks or more.

Nearly five million patients couldn’t see their GP within two weeks in October, with a million of them having to wait a staggering four weeks.

Official data also showed more than a million appointments simply go to waste every month because patients don’t bother to turn up.