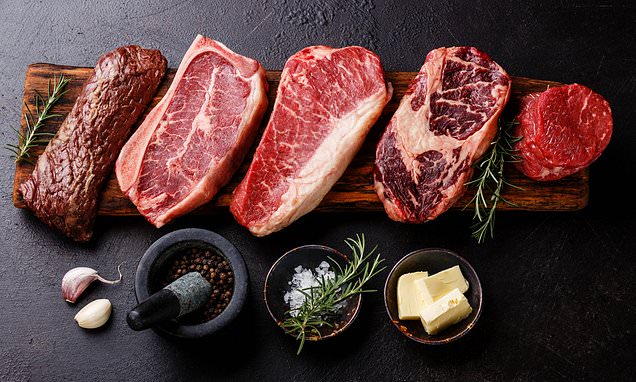 Good news for steak lovers! Eating unprocessed red meat will NOT raise your risk of a stroke, review finds

Eating unprocessed red meat does not make you more likely to suffer a stroke, a review suggests.

For decades there have been fears that consuming lots of steak and pork can increase the risk of heart disease due to their high levels of fat.

But scientists who analyzed nearly 200 existing studies found ‘no evidence’ that the two are linked.

And there was also only ‘weak evidence’ that eating unprocessed red meat leads to colorectal cancer, breast cancer and type 2 diabetes.

Lead study author Dr Christopher Murray, from Washington University, said he hoped the finding will ‘clear up confusion and help consumers make informed decisions about diet, exercise, and other activities that can affect their long-term health’.

Meat is considered unprocessed if it is fresh, and hasn’t been packaged, cooked, canned or altered from its natural state.

Processed meat — like bacon, sausages and salami — has been modified to enhance its taste or shelf life, by smoking, salting, curing, drying or canning. 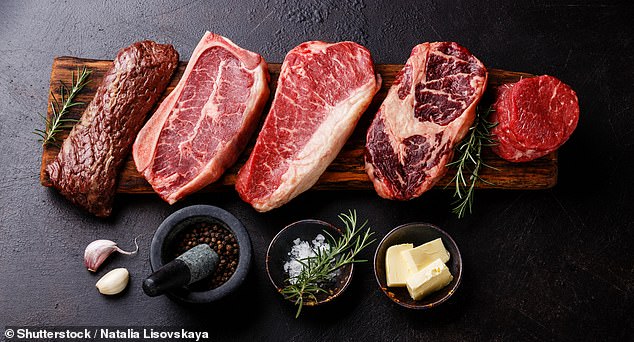 Eating unprocessed red meat does not raise your risk of having a stroke, contrary to previous findings. Past studies had conflicting results, researchers from the University of Washington found

For years, eating red meat has been linked to an increased risk of heart disease due to its high levels of saturated fat.

The fat is thought to raise levels of low-density lipoprotein (LDL) cholesterol in the body, which is a well-known risk factor for coronary heart disease.

The researchers examined 180 studies from across the world which looked at certain behaviors and diet choices and their effect on illnesses.

They used an easy star rating system showing the strength of evidence for each pairing.

One star meant there may be no association, while five meant the behavior increased the chance of the condition by more than 85 per cent.

Unsurprisingly, the review found very strong evidence between smoking and lung cancer – which increased the risk by 106 per cent.

The link between eating lots of unprocessed red meat and ischemic stroke – the most common type of stroke – was given just one star.

A two-star link was found between avoiding vegetables and coronary heart disease.

People who avoided their greens had between a 0 and 15 per cent increased risk of the condition, according to the review.

Co-lead author Dr Emmanuela Gakidou said: ‘In addition to helping consumers, our analysis can guide policymakers in developing health and wellness education programs, so that they focus on the risk factors with the greatest impact on health.

‘Health researchers can also use this analysis to identify areas where current evidence is weak and more definitive studies are needed.’

The ratings may change as more data becomes available, especially for pairings with low star ratings where the research is limited or contradictory, the researchers said.

High star ratings are less likely to change, since there is already strong evidence for the link.

The findings were published in the journal Nature Medicine.

THE CAUSES OF STROKE

There are two major kinds of stroke:

An ischemic stroke – which accounts for 80 per cent of strokes – occurs when there is a blockage in a blood vessel that prevents blood from reaching part of the brain.

The more rare, a hemorrhagic stroke, occurs when a blood vessel bursts, flooding part of the brain with too much blood while depriving other areas of adequate blood supply.

It can be the result of an AVM, or arteriovenous malformation (an abnormal cluster of blood vessels), in the brain.

Thirty percent of subarachnoid hemorrhage sufferers die before reaching the hospital. A further 25 per cent die within 24 hours. And 40 per cent of survivors die within a week.

Age, high blood pressure, smoking, obesity, sedentary lifestyle, diabetes, atrial fibrillation, family history, and history of a previous stroke or TIA (a mini stroke) are all risk factors for having a stroke.

SYMPTOMS OF A STROKE

Of the roughly three out of four people who survive a stroke, many will have life-long disabilities.

Both are potentially fatal, and patients require surgery or a drug called tPA (tissue plasminogen activator) within three hours to save them.