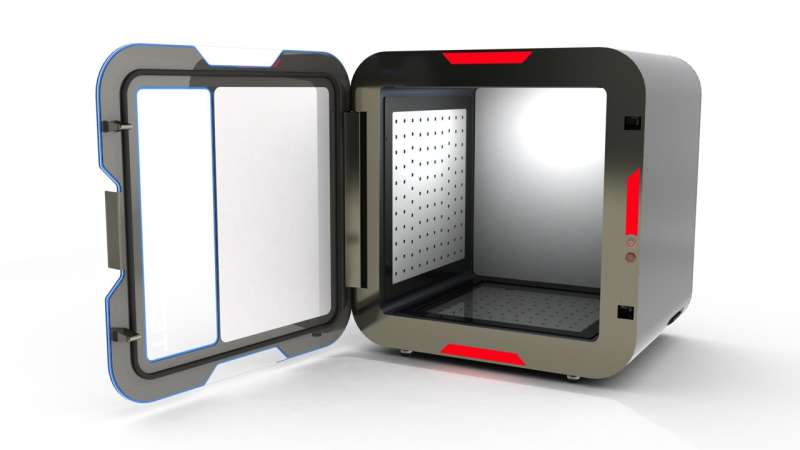 A new made-in-Alberta sanitization product aimed at stopping the spread of SARS-CoV-2 will soon be in use at the Edmonton International Airport and government offices in Calgary and Edmonton, thanks to a partnership with scientists at the University of Alberta’s Biosafety Level 3 Lab.

The TESER ACT unit uses ultraviolet-C light from hundreds of LED light bulbs to kill viruses and other common pathogens, including flu and common cold viruses, as well as E. coli bacteria, within 60 seconds.

As one of the few facilities in the province certified to handle the infectious SARS-CoV-2 virus, the U of A Biosafety Level 3 Lab was asked by dozens of companies, including TESER Advanced Sanitization Technologies of Calgary, to test their anti-COVID technologies.

“Having a local partner just up the highway with a Level 3 bio lab and all of the resources and expertise of the scientists in the laboratory, it’s been absolutely huge,” said John Fox, vice-president of business operations at TESER.

“It’s honestly one of our competitive advantages over other companies, because a lot of companies have to send their products away to independent labs. We’ve had these great partners all the way along, giving us suggestions and working through problems with us on destroying microorganisms, viruses and bacteria,” Fox said. “It’s just been a huge boost.”

“This company could not have done this work so quickly if it weren’t for the existence of the University of Alberta and its Level 3 facilities,” said project supervisor David Evans, professor of medical microbiology and immunology in the Faculty of Medicine & Dentistry. “This investment in infrastructure and salaries and students and staff has value.”

Killing SARS-CoV-2 in less than a minute

It’s been known for about a century that UVC light can kill pathogens, but the company needed scientific proof that it works against SARS-CoV-2 to meet Health Canada regulations.

“We determined how much UVC light was required to fully inactivate the SARS-CoV-2 virus and prevent it from replicating,” explained Ryan Noyce, a research associate who works with Evans at the Biosafety Level 3 Lab. “We were able to inactivate it within less than a minute.”

TESER developed two models to sanitize everything from cellphones to parcels to non-invasive medical instruments. One unit looks much like a microwave and can be placed on a desk or on a mobile cart and moved from a mailroom to a cafeteria, for example. The other unit has two doors so it can be built into a wall as a pass-through chamber. There is UVC-blocking glass on the doors so you can see the lights working without damaging eyes or skin.

“Any item that can fit inside the unit can be sanitized,” explained Fox. “It’s not harmful to electronics; there’s no chemical component to it. The unit has only two buttons to operate so it’s simple, and it’s very energy-efficient.”

Fox said the technology has commercial and health-care applications, and eventually a smaller unit will be developed for residential use. The units sell for $23,000 each, but the company hopes to bring the price down as they scale up production.

“The whole purpose of the contract was to propose a solution to help keep the workplace safe, keep people at work and keep people from getting sick,” Fox said.

Alberta Innovates and InnoTech Alberta also provided development support to TESER. “We were there on the front end to help scale up the technology and look forward to seeing TESER’s technology in the marketplace,” said Richard Gibson of InnoTech Alberta.

“InnoTech’s analytical labs developed the high-resolution UV maps that helped TESER optimize their initial design,” he said. “Our plant pathology lab quickly pivoted their microbial expertise to utilize non-pathogenic viruses to help dial in the dosage likely to control SARS-CoV-2 and additional human pathogens, prior to the testing at the U of A’s level 3 lab.”

Noyce noted that Evans and his lab team pivoted from their focus on poxviruses and cancer when the pandemic broke out.