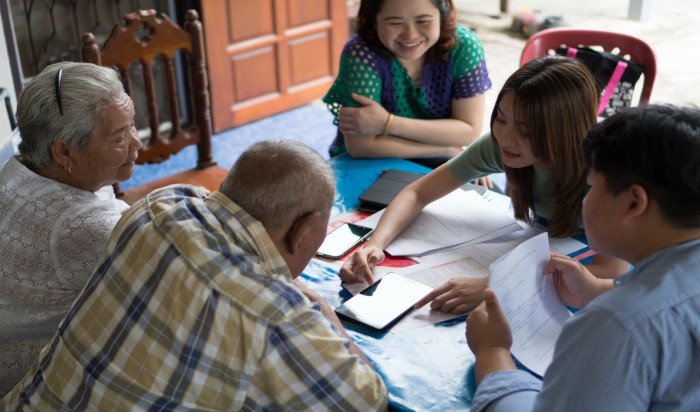 Manee Project is the research project funded by The Thailand Research Fund. It is aimed to find the suitable health sensor platform for monitoring health and behaviour of the household residents, mainly the elderly staying at home on their own. The data from their homes will be integrated with their medical records in order to help the doctor better analyse the health data. Its ultimate goal is preventive analytics of the individual for the purpose of changing their lifestyles from corresponding persuasive technology.

The healthcare providers involved in the project are:

Could you provide us with an update on the latest developments of each of the three components – smart ambulance, preventive healthcare service and blockchain & analytics?

Smart ambulance: This project is initiated by the trauma and critical care centre, Khon Kaen Provincial Hospital. It consists of the Ambulance Operation Centre or AOC, a technology designed and developed to reduce limitations caused by the distance and time taken to travel to the site.

With the AOC system, everything can be connected through the Internet and the barriers for the ambulance to reach the exact position without consuming too much time are greatly reduced. Ambulances can accurately reach the patients in a faster time. GPS will indicate the exact site and the nearest ambulance will be assigned.

As such, the patient has a higher rate of survival. All necessary information for doctors to make critical decisions such as vital signs, blood pressure, patient situation are sent to the hospital in real time by snapshot or video stream displayed on the screen. Staff at the hospital can prepare appropriate methods for the patient prior to the arrival of the ambulance.

Preventive healthcare service: This service was initially launched using smart wristband to monitor the steps from the selected population. Regarding the health sensors platform, Manee Project, 30 households that have elderly residents with chronic diseases were selected for the installation of sensors. The installment has begun in October 2018 and will be expected to be completed by the end of November 2018.

Health analytics: Prototypes of the smart ICU have already been completed. Data from the respirators and vital sign monitors were sent to Google Cloud Analytics. The system can display warnings for 10 minutes before the blood oxygen desaturation.

The next step is the integration of EHR data and customising it to the UI and alert system. Health information exchange via blockchain is also being developed. CAT Telecom, which is a government-held telecommunication company will provide the infrastructure for information exchange. The first project will be on drug information exchange followed by logistics and material flow. Data standards such as SNOMED CT, LOINC, GTIN, and ICD code will be used alongside the project.

As part of the preventive healthcare service component, preliminary data from 30 elderly subjects indicated the acceptability of a smart wrist band, together with additional devices to monitor blood pressure, sugar levels, movements and even eating patterns/habits. How is the data from these different devices going to be integrated with electronic medical records from the healthcare providers? What are the opportunities and challenges of such an integration?

Above photo: An elderly resisdent tries on smart wrist band as part of the preventive healthcare service component of the Khon Kaen Smart Health project.

Data from each device can be integrated with EMR using the Thai unique ID for identification purposes. The most important step is to apply standards for home use/wearable device connectivity such as Continua to all participating devices. The challenges are mapping values from various devices in to a single standard and getting the data from each cloud storage to a single data lake. Working with local and international device companies on behalf of the Digital Economy Promotion Agency (DEPA) and Khon Kaen Smart City will be one of the keys to the success of the project.

Local communities such as universities, chamber of commerce, health tech associations, local drug stores and people working with sand boxes have been actively involved in this project. The Digital Economy Promotion Agency or DEPA, is the main organiser for the cooperation. Sharing the vision and knowledge is very important. Communities need ongoing support if change and sustainability are to be achieved.

Are there future plans to expand the Smart Health Project to other parts of Thailand?

Following Thailand’s 20-year-strategic plan and eHealth Thailand, the national health information system, telehealth and big data analysis are major pillars for healthcare. Our Khon Kaen Smart city project can be the spearhead to the goal. Prototypes from the project will be expanded to cover every health region in northeast Thailand in the next couple of years. Working with government organisations such as DEPA, Ministry of Public Health help us to integrate and customise our project to the whole picture of our country.

Prof Cholatip is a speaker at  HIMSS AsiaPac 18 in Brisbane this November.