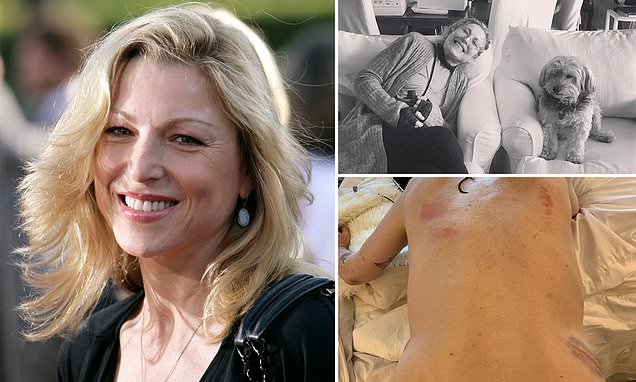 Legendary actress Tatum O’Neal reveals how her battle with rheumatoid arthritis has left her with surgery scars, bruises from falls and heating pad burns in emotional Instagram posts

Tatum O’Neal has revealed her back covered in surgery scars, bruises from falls and heating pad burns from her battle with rheumatoid arthritis.

The actress posted a series of photos to Instagram, including one on Wednesday showing red marks, black-and-blue spots and long scratches.

‘Living with rheumatoid arthritis. A fall scratch scar on my right hip. And the back surgery scar from eight years ago,’ the 56-year-old wrote.

‘My last back surgery scar is on the front from February. And all those red marks are from heating pads ~ I  probably should turn those down a little bit and, believe it or not this is me actually getting better.’ 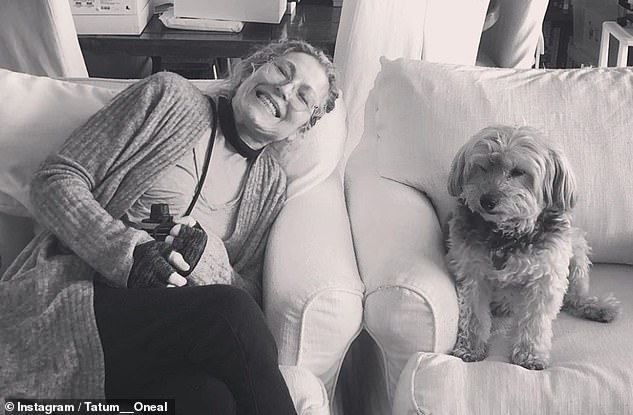 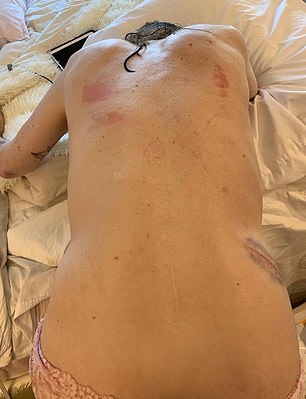 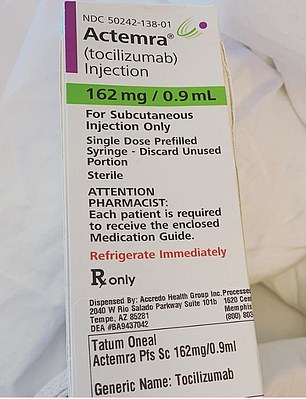 In one photo, she showed her back covered with surgery scars, bruises from falls and heating pad burns (left). In another, she showed one of the medications that she takes, Actemra, which blocks the inflammatory protein IL-6 to improve joint pain and swelling (right)

On Saturday, O’Neal shared a photo of herself with one of her dogs, and wrote a caption about her struggle with the inflammatory condition.

‘I’ve been in some rheumatoid arthritis bull c**p but finally I’m feeling a little bit better,’ she wrote.

‘I hate texting because my hands suck Right now…so If I don’t text you back I promise it’s nothing personal. On the mend.’

She’d had pain in her neck and back from several surgeries and a knee that was swollen and wouldn’t heal after an operation.

‘The pain changed in nature and location. It was scary,’ she said in an interview with the Arthritis Foundation.

O’Neal said she had difficulty walking and then, one night in 2013 at age 50, her right hand swelled up and ached ‘unbelievably’.

She was soon after diagnosed with rheumatoid arthritis, commenting: ‘That was a sad day.’

Rheumatoid arthritis is a chronic inflammatory disorder in which the immune system mistakenly attacks the body’s own tissues.

It affects the lining of the joints, causing painful swelling that can lead to bone erosion and joint deformity, according to the Mayo Clinic. 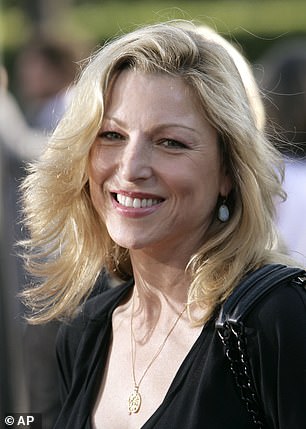 O’Neal (left and right) was diagnosed with rheumatoid arthritis in 2013 at age 50. The inflammatory disorder occurs when the immune system mistakenly attacks the body’s own tissues, causing painful swelling of joint linings 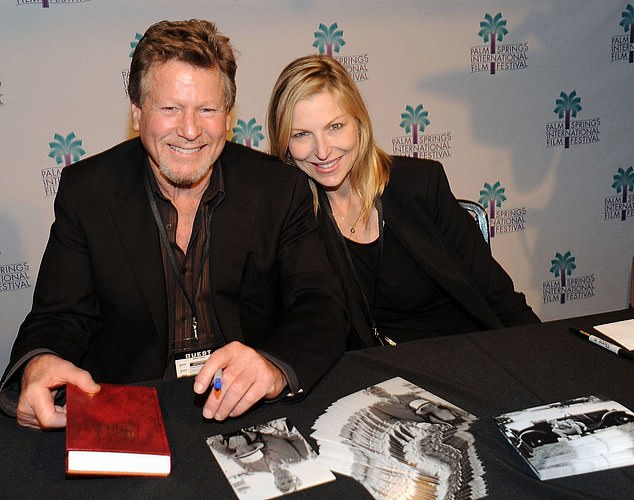 The inflammation can damage other body parts as well including the eyes, heart lungs and blood vessels.

Early rheumatoid arthritis affects smaller joints, such as the ones in the hands and the feet, before progressing to places such as the knees, hips and shoulders.

Treatment consists of medications to prevent or slow joint damage, or surgery to repair damaged joints.

About 1.3 millions Americans have rheumatoid arthritis, with women two to three times more likely to suffer than men.

On New Year’s Eve, O’Neal shared a photo of one of the medications that she takes, Actemra, which blocks the inflammatory protein IL-6 to improve joint pain and swelling.

She also told Arthritis Foundation she tries to keep a healthy diet – eating wild salmon and limiting meats and fried food – and does floor stretches and Pilates in an effort to manage the inflammation.

‘I’ve worked out with trainers. They push you harder than you want to go. They don’t understand the damage. I know how far I can go,’ she said.

‘[Rheumatoid arthritis is] not curable but you can go into remission.’