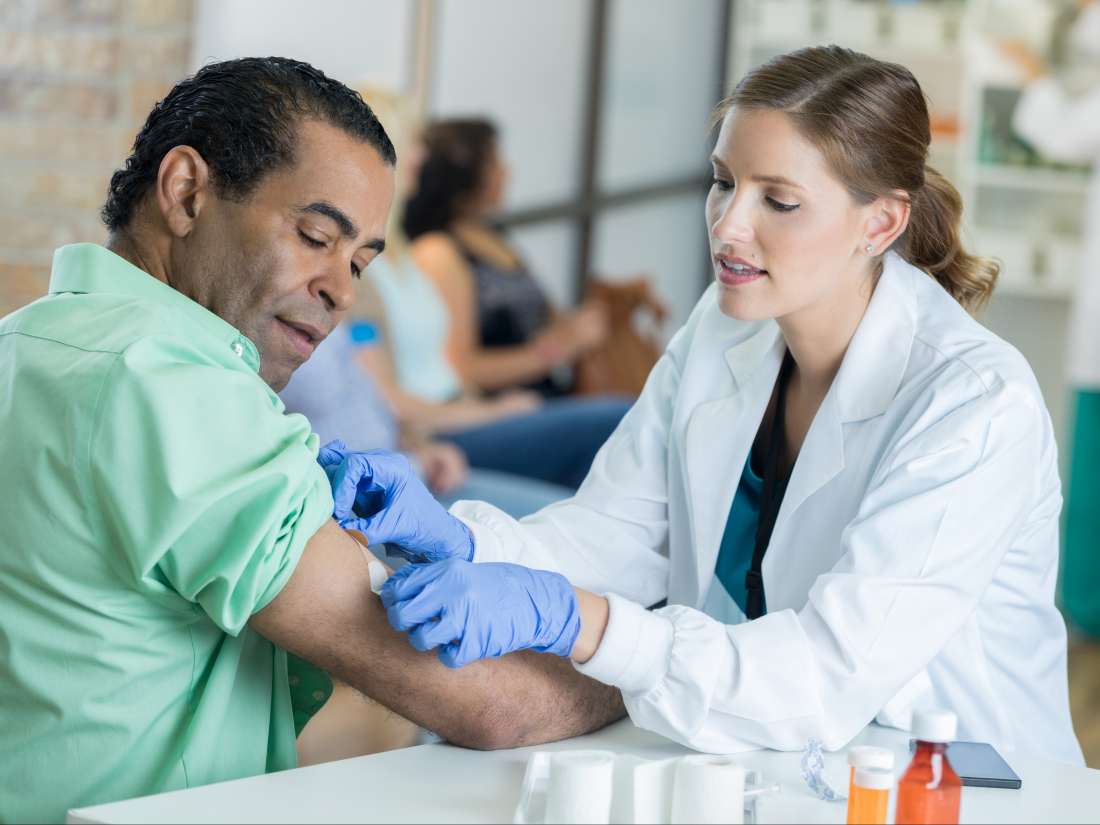 Tetanus occurs as a result of a bacterial infection. According to the Centers for Disease Control and Prevention (CDC), tetanus kills one out of every ten people who contract the disease.

The bacteria that cause tetanus may be most common in substances such as dust, soil, or manure. They often enter the body through injuries that include scratches or cuts.

Vaccines are a type of medication and, just as with other medicines, there is always the possibility of side effects.

With that said, most people who get a tetanus shot will not experience any symptoms.

The most common side effects of a tetanus shot include:

Serious side effects are not common but may still occur in certain people.

Below, we list some of the more frequent side effects people may experience after a tetanus shot:

Pain at the injection site

The most common side effect is pain at the site of the injection. According to the CDC, this occurs in about eight in every ten people. This pain is a person’s body having a mild reaction to the injection, and it should fade within a few days.

Some people may experience a slightly more intense reaction from the injection, causing their skin around the injection site to become red and swollen.

The CDC say that one in four people will experience redness or swelling. Over-the-counter (OTC) medicines for pain, including ibuprofen (Advil) or acetaminophen (Tylenol), may help.

Although it is rarer than the other common side effects, some people may develop a low-grade fever in response to the tetanus vaccine. The fever should subside without intervention, but, again, OTC medication may help ease symptoms.

Some forms of the tetanus vaccine, such as the Tdap, may cause gastrointestinal symptoms, including nausea, vomiting, or diarrhea.

The CDC estimate that one to three people in 100 will have moderate gastrointestinal symptoms after the Tdap vaccine.

The best course of action is to drink plenty of fluids, rest, and eat plain food to avoid aggravating the gastrointestinal system any further.

The symptoms will usually subside with time.

Occasionally, a person may develop a rash or other skin reaction from the tetanus shot. The glands in their body may swell up as a response to the injection. This side effect is not common and tends to go away on its own.

Swelling of the arm

Some people may experience more extensive swelling in the arm where they received the injection.

The CDC estimate that one in every 500 people may experience swelling of their entire arm after an injection of the Tdap vaccine. However, it describes this as a moderate effect, which does not typically need medical intervention.

Below are some more severe side effects that can result from the tetanus shot and may need medical attention.

In rare cases, swelling, redness, and severe pain may occur after the injection. The skin may break and bleed as a response to the vaccine. This occurs around the injection site and requires medical attention.

There is also a rare possibility of a person having a severe allergic reaction to the vaccine. The CDC estimate that this form of reaction happens in less than one in every 1 million cases.

Symptoms of an allergic reaction include:

The reaction would start to happen between a few minutes to a few hours after receiving the injection, and it requires immediate medical attention.

Does the tetanus vaccine cause autism?

The tetanus vaccine does not cause autism.

While people express concerns about the potential for serious side effects from vaccines, this worry may come partly from misinformation. As the United States Department of Health and Human Services state, research shows vaccines do not lead to autism.

Most people get a tetanus shot as a child, and so it is helpful if people are aware of any reactions they had when they were young.

People with certain conditions may also want to be wary when looking to get a tetanus shot and should talk to their doctor to discuss their options.

People should be cautious if they have ever had:

Some tetanus vaccines may pose a risk to the health of people with any of these concerns. Doctors can advise them on how they should take care to avoid the diseases a vaccine would protect against.

People should always discuss any health concerns or conditions they have with a doctor before having any vaccine.

Side effects of a tetanus shot are uncommon, mild, and usually go away on their own in a few days. Most people think the chances of having side effects are much smaller than the risks of conditions such as tetanus.

Rarely, people may have a severe reaction to the vaccines and should avoid them, but these reactions are not common. The tetanus shot is a safe and effective way to prevent tetanus and other dangerous diseases occurring in most cases.

Anyone with concerns about the vaccine or the possible side effects should talk to their doctor.