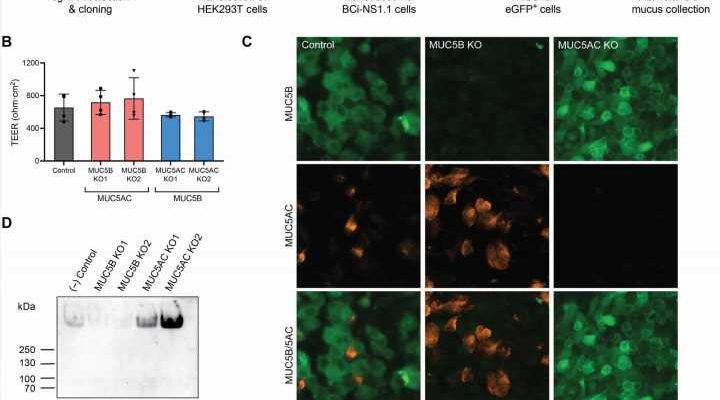 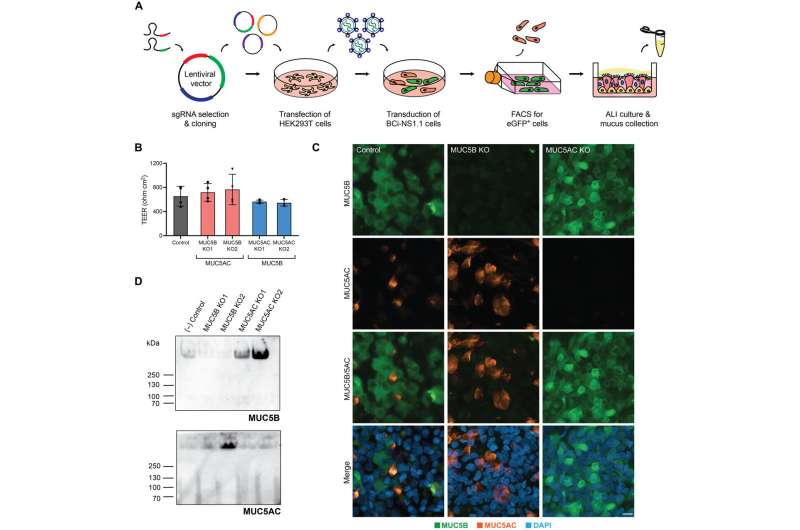 University of Maryland (UMD) researchers have made an unexpected finding about how we clear our throats—(or technically, mucus from our airways)—that might one day change therapies that treat pulmonary diseases such as asthma, chronic obstructive pulmonary disease (COPD) and cystic fibrosis. The group’s work was published in Science Advances.

Fischell Department of Bioengineering Assistant Professor Gregg Duncan and members of his Respiratory NanoBioengineering Lab set out to develop a first-of-its-kind system to study the role of two mucin proteins that comprise the mucus clearance system in human airways. These proteins, known as MUC5AC and MUC5B, form a hydrogel that can be transported by tiny, hair-like structures known as cilia in order to clear pathogens and debris from the airways.

For years, scientists believed that only MUC5B played an active role in facilitating airway transport—the first-line defense against infection or damage of the lungs. But in the process of developing their in vitro model of human airway epithelial tissue, Duncan’s team discovered that MUC5AC has been wrongfully overlooked.

“For our protection, the lungs possess a biological ‘conveyor belt’ system consisting of mucus and the underlying ciliated cells,” Duncan said. “Prior to this study, this conveyor belt was thought to be primarily directed by the coordinated motion of cilia. However, we found that the mucus gel plays an active role in maintaining the uniformity of transport on the tissue scale to maximize clearance efficiency.”

When a person inhales a pathogen or potentially harmful particle, cilia help to catapult these invaders out of the lungs and into the throat. From there, these particles often make their way to the stomach, where they usually cannot survive the stomach’s acidic environment. But first, mucus must trap these invaders.

Of the two proteins, MUC5B has been the known driver of mucus transport; deficiency of this protein can limit or prevent airway clearance. Conversely, overproduction of MUC5AC has been shown to impair airway clearance, leading to decreased lung function in chronic bronchitis and significant reduction of airflow in fatal asthma. MUC5AC was widely believed to be largely unhelpful to the entire process of airway clearance, which led scientists to question its purpose.

But, when Duncan’s team set out to develop human airway tissue cultures, they stumbled on a potential answer. Duncan’s group used CRISPR/Cas9-mediated genome editing tools to delete MUC5AC from its model of the human airway. When they did so, they found swirling, irregular flow patterns unconducive to efficient airway clearance. But after finding that when it added MUC5AC back into the model, the team immediately fixed the issue.

This discovery shows that the ratio between MUC5B and MUC5AC likely plays a critical role in airway clearance, particularly in diseases like asthma, where overproduction of mucus can lead to severe or even fatal health outcomes.

Current drugs used to target airway mucus are designed to break up the structures that hold mucus together, making airway mucus more water-like. This pathway isn’t a perfect solution, though, because this lower-viscosity mucus doesn’t transport well—even if it’s easier to break down. Even more, Duncan’s findings show that the solution is likely not to eliminate MUC5AC altogether; instead, the most effective treatment pathway might center on restoring the appropriate balance between MUC5B and MUC5AC.