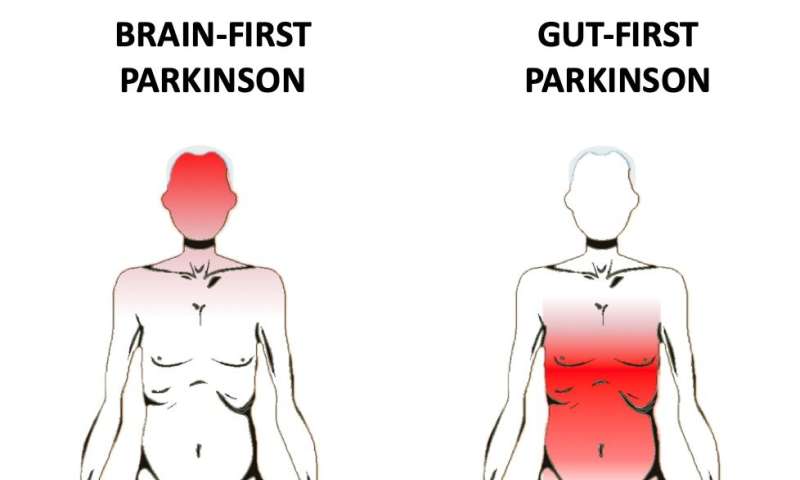 Does Parkinson’s disease (PD) start in the brain or the gut? In a new contribution published in the Journal of Parkinson’s Disease, scientists hypothesize that PD can be divided into two subtypes: gut-first, originating in the peripheral nervous system (PNS) of the gut and spreading to the brain; and brain-first, originating in the brain, or entering the brain via the olfactory system, and spreading to the brainstem and peripheral nervous system.

“Evidence from autopsy studies of brains from PD patients has suggested that PD may start in the peripheral nervous system of the gut and nose. The pathology then spreads via the nerves into the brain. However, not all autopsy studies agree with this interpretation,” explained Dr. Borghammer. “In some cases, the brains do not contain pathology at the important ‘entry points’ into the brain, such as the dorsal vagus nucleus at the bottom of the brainstem. The gut-first versus brain-first hypothesis posited in this review provides a scenario that can reconcile these discrepant findings from the neuropathological literature into one single coherent theory about the origins of PD.”

“The discussion about the origins of PD is often framed as an ‘either-or’, i.e., either all PD cases start in the gut or all cases start in the brain,” added Dr. Van Den Berge. “However, much of the evidence seems compatible with both these interpretations. Thus, we need to entertain the possibility that both scenarios are actually true.”

The review summarizes existing evidence from imaging studies from humans and tissue studies from humans and animal models. The imaging and histology studies are generally compatible with the brain-first vs body-first hypothesis. If this hypothesis is correct, it suggests that PD is more complicated than originally thought. If the disease starts in the gut in only a fraction of patients, it is likely that interventions targeting the gut might only be effective for some PD patients, but not for individuals in which the disease starts in the brain itself.

“If the brain-first vs body-first hypothesis is correct, we need to intensify the research into understanding risk factors and triggering factors for these two subtypes,” noted Dr. Van Den Berge.

“It is probable that these different types of PD need different treatment strategies,” commented Dr. Borghammer. “It may be possible to prevent the ‘gut-first’ type of PD through interventions targeting the gut, such as probiotics, fecal transplants, and anti-inflammatory treatments. However, these strategies might not work with respect to treating and preventing the brain-first type. Thus, a personalized treatment strategy will be required, and we need to be able to identify these subtypes of PD in the individual patient.”