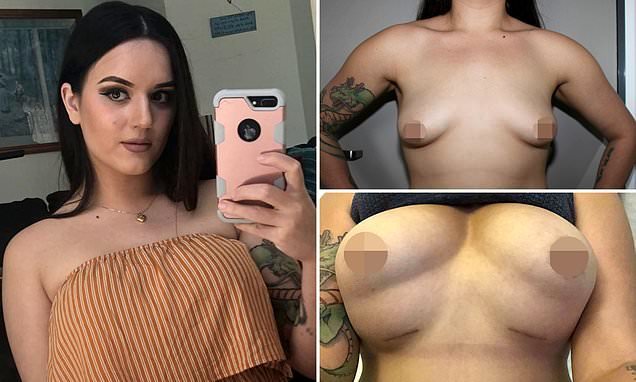 Woman, 23, is left with ‘double bubble boobs’ after the plastic surgery she spent her life savings on went wrong

A young woman claims she’s been left with botched ‘double bubble’ boobs after spending her life savings on plastic surgery.

Jacqueline Harvey, 23, from Brisbane, spent five years saving for augmentation but immediately regretted her decision when she looked in the mirror last year.

After splashing out £4,500 [$6,000 AUD] on the procedure, the graphic designer was horrified when she realised her implants had caused a deformity under her breast bone.

The problem occurs when the implants are placed lower than the breast tissue, and the natural crease line does not disappear – creating a ‘four breast’ appearance. 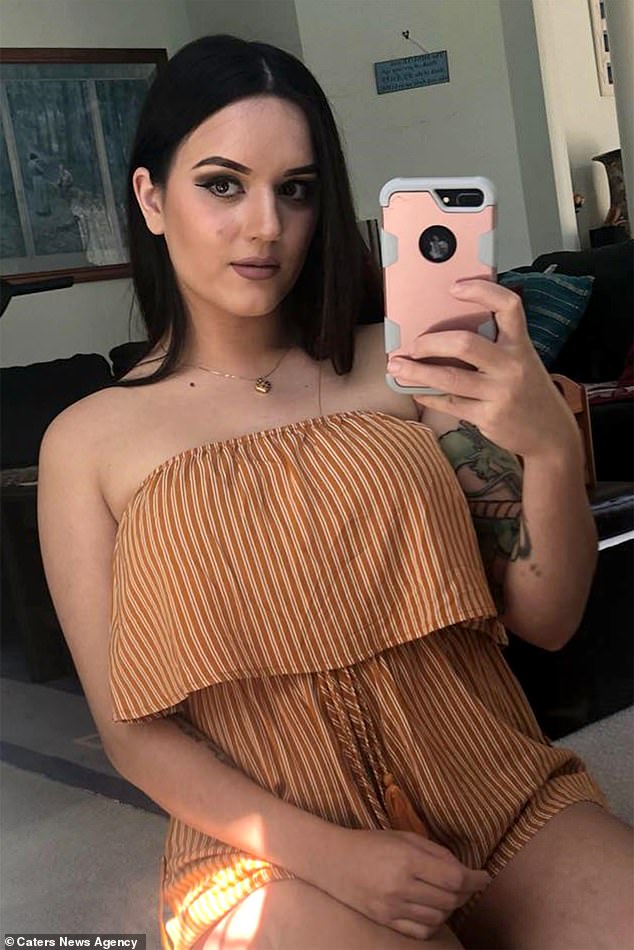 Upset: The graphic designer will now have to fund corrective surgery at roughly £4,500 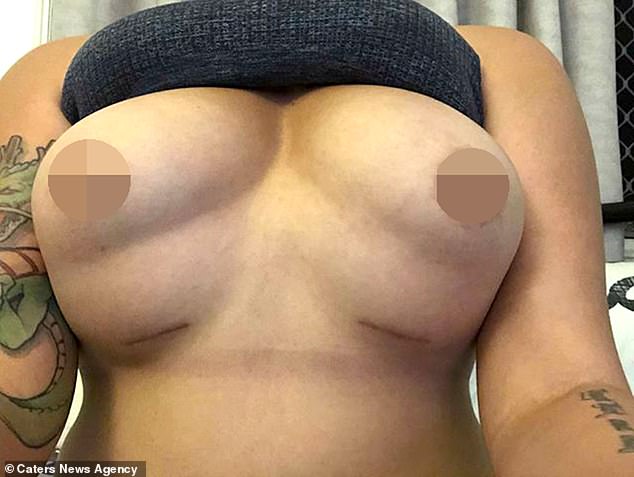 Deformed: Jacqueline Harvey, 23, spent five years saving for augmentation but regretted her decision when the implants were placed lower than the breast tissue and caused a crease line

Now, five months later, Ms Harvey, from Creastmead, is trying to save enough funds to pay for corrective surgery.

The brunette said: ‘I’d wanted a boob job since I was 18 years old as I felt as though I was out of proportion.

‘But when I found a plastic surgeon who would do the procedure for a discounted rate of £4500 [$6,000] I booked the operation for last August.

‘I was a breast size 34C and chose to go to a DD, but my excitement turned into a nightmare when I saw them for the first time.

‘My boobs were deformed and it looked as though I had a bubble underneath my actual boob as the implant looked like it had slid down.

‘It was bizarre and I can’t believe the surgeons let me walk out with them like that. I was reassured that it was normal and waited six weeks as advised by the surgery for them to ‘settle down.’ 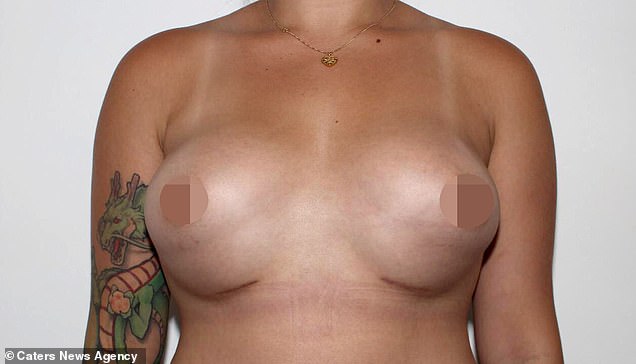 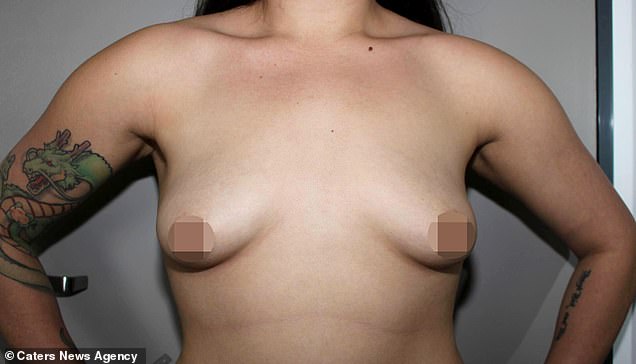 Then and now: Ms Harvey’s breasts are shown before (R) and after the cosmetic surgery (L) 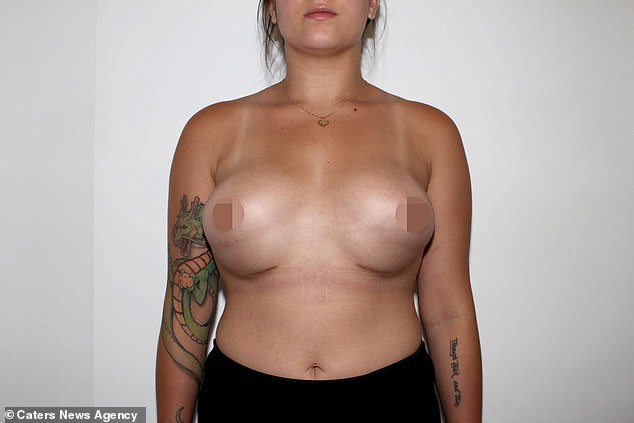 ‘I try to not think about them or look at them because as soon as I take my top off and look at myself in the mirror I cry every time,’ says Ms Harvey

Unfortunately, this didn’t happen and the deformity remained as visible as ever.

‘Nothing changed, so I posted on a forum for plastic surgeons and found out from others that it doesn’t appear that my surgeon had appropriate experience.

‘The clinic has since offered free revision surgery but I couldn’t go back there again, they could end up even worse. I am now back to square one and I regret ever getting them done in the first place.

‘I try to not think about them or look at them because as soon as I take my top off and look at myself in the mirror I cry every time. They look so horrible, I wish it was just a dream but it’s not.’

But now she will have to spend the same amount on corrective surgery. 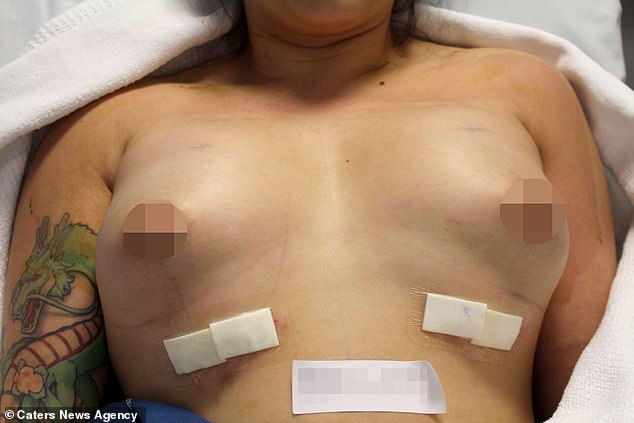 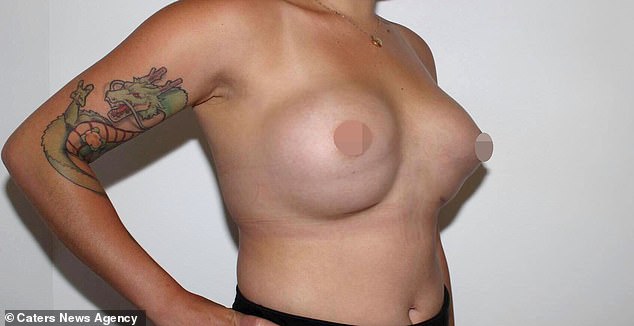 ‘It hurts to wear any bra other than my post-operative bra anyway. It’s hard to find bras that fit properly as well since they sit low, I need longer straps,’ she added.

‘And because the shape of the bottom of the breast is not round, it’s a double bubble, I cannot find any bras with cups that will accommodate to this and be comfortable to wear.

‘I still go out, but I wear shirts that cover my breasts. They look so low and wide apart, there is no cleavage at all because of where they are sitting. They might still look big, but they are so low down my chest, if I were to wear a low-cut top I still look ‘flat chested’ and since they are set wide apart, they can’t be pushed together to make cleavage.

‘My advice for other women to do as much research as possible about your surgeon, your shape, and what complications are at greater risk to you specifically if you don’t have the ‘ideal’ shaped breasts to begin with.

‘I will definitely be attending more than one consultation for my corrective surgery to ensure I get the best advice and to find a reliable surgeon who I can trust and who understands my desired outcome.’