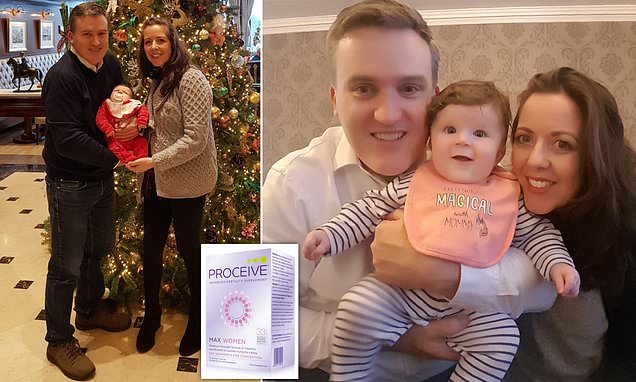 A couple has conceived naturally following three failed attempts at IVF – after they both started taking a supplement.

Karen O’Brien, 44, had been trying for a baby with her partner, Allan Kennedy, for around five years before she finally became pregnant.

The couple, from Dublin, claim doctors at fertility clinics had insisted Mrs O’Brien was ‘the problem’ before stating their lack of luck was ‘unexplained’.

Eventually, a test revealed Mr Kennedy’s sperm was damaged at a genetic level – a term known as DNA fragmentation.

By this point, specialists said that because Mrs O’Brien was ‘old’, the couple would need to fork out thousands of pounds for more treatment.

With no options left, they sought a more natural approach and were advised to take Proceive supplements.

Within a year, they had become first-time parents, giving birth to miracle baby Erin in October 2018. She weighed 8lbs 13. 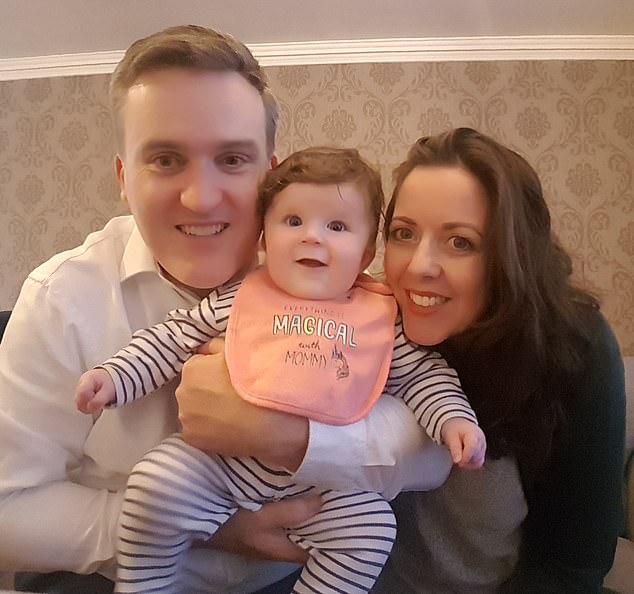 The couple, from Ireland, claim doctors at fertility clinics had insisted Mrs O’Brien was ‘the problem’ before stating their lack of luck was ‘unexplained’. Pictured at Christmas 2018 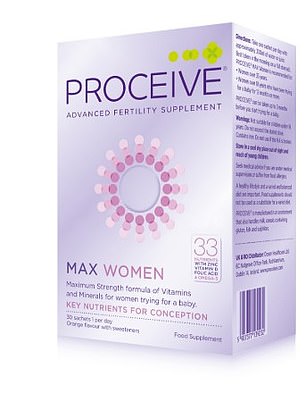 After failing to conceive naturally and in the lab for five years, the couple were advised to take Proceive supplement (pictured). A year later they had a baby on the way

Mrs O’Brien, a dog groomer, said: ‘We couldn’t help feeling that this might have been the problem all along, but no one had tested Allan thoroughly.

‘We were so excited when we got pregnant.’

When Mr Kennedy came back to Dublin after working abroad in an online recruitment company for five years, the couple seized the opportunity to get married and try for a baby.

Mrs O’Brien, who was 39 at the time, said: ‘I knew I was a bit older than other first-time mums.

‘But both Allan (then 41) and I still assumed it would happen at some point. But it didn’t and then we knew we had to look at other options. I didn’t panic though, I’m generally quite a calm person.’

By the age of 40 in 2014 and still not pregnant, Mrs O’Brien and Mr Kennedy decided to try IVF.

The process started with the basics – Mrs O’Brien was asked about her overall health, but the couple claim Mr Kennedy was not asked anything.

He was given a standard sperm motility test – looking at the sperms movement, shape and number – which came back as normal.

Mrs O’Brien said: ‘I didn’t think anything of it at the time but looking back, it was strange that they didn’t even consider that his fertility might also be an issue.’

Sperm DNA fragmentation is when the sperms DNA, which has information on how to fertilise an egg and then produce an embryo, is damaged.

This takes place either when sperm is being produced in the testes, when it is vulnerable to too much heat, for example, or while it is stored before ejaculation.

High levels of sperm DNA fragmentation can delay natural conception, lead to repeated miscarriage and reduce the success of fertility treatments such as IVF.

DNA fragmentation is usually caused by oxidative stress, which produces free radicals which attack the DNA molecule causing breaks in the DNA strands.

Mrs O’Brien was set for IVF after receiving a healthy results from a HyCoSy test, which checks the fallopian tubes aren’t blocked or damaged.

Despite Mrs O’Brien being a ‘geriatric patient’, aged 41, the clinic was able to collect 13 eggs, 9 of which fertilised, and six of which became healthy embryos.

Unfortunately, Mrs O’Brien did not get pregnant. At her age of 41, there is a nine per cent chance of having a baby, according to the NHS. The chances of a pregnancy after the age of 42 are significantly lower than younger women.

Mrs O’Brien said: ‘It felt like we were on a production line – very impersonal. I also have a massive phobia of needles, so all the injections were a nightmare for me.

‘We were both very disappointed because we’d gathered a good number of eggs and it had looked positive.

She added: ‘The approach with all the clinics is, “It didn’t work lets do it again”. They don’t look for a reason they just say it’s bad luck.

‘Allan was worse than me because he couldn’t understand what had gone wrong. Both of us were determined not to give up.’

They went to a different clinic in 2015, where two more costly IVF cycles failed.

They had been using PICSI method, a more expensive form of IVF, which selects the healthiest sperm for the egg, sometimes used when the woman is deemed to have weak eggs.

After three failed rounds of PICSI, the couple pushed for a DNA fragmentation test, after Mrs O’Brien read about it online.

The test can determine if there are abnormalities in the sperm’s DNA, mainly that it is broken and therefore ‘fragile’.

High DNA damage can affect the success rate of fertilisation and normal embryo development, and in IVF, there is some evidence that it affects implantation rates in mice studies.

But the results changed everything – Mr Kennedy had high DNA fragmentation in his sperm at a rate of 47 per cent. High DNA damage is considered between 11 and 57 per cent. 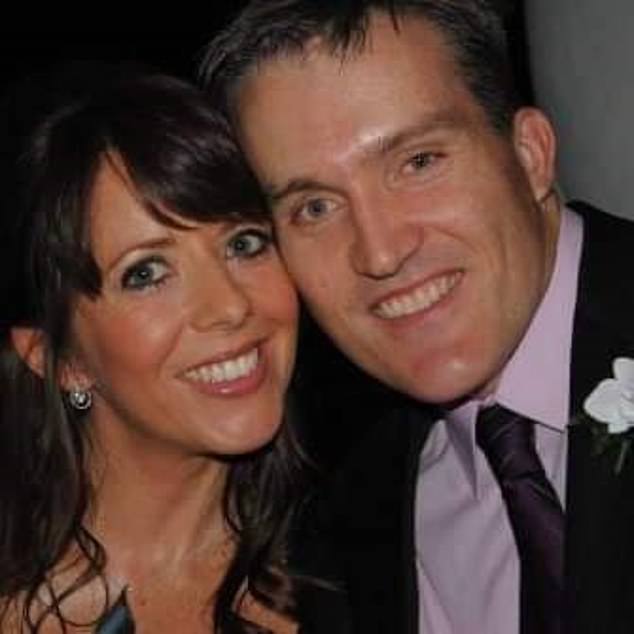 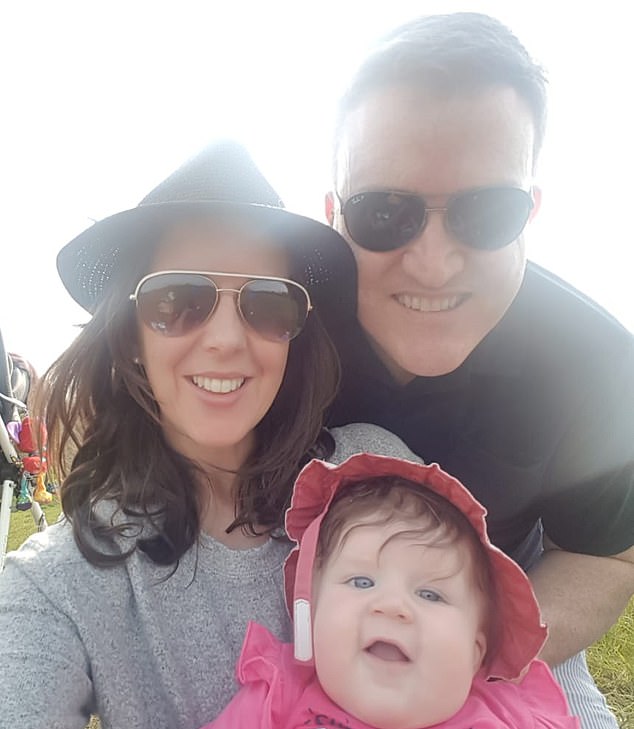 Mrs O’Brien claims the third clinic dismissed the DNA fragmentation as an issue and insisted it was her that needed treatment. They said the couple would need to pay for a donor eggs, at which point they turned to a more natural approach. Pictured with Erin who was born in October 2018

Mrs O’Brien said: ‘The more we investigated ourselves, we discovered more about the available tests for both males and females. No-one told us.’

At a third IVF clinic, Mrs O’Brien claims the clinic dismissed the DNA fragmentation as an issue and insisted it was her that needed treatment.

She said: ‘The doctor argued that I was too old for IVF treatment with my own eggs and refused to carry out further treatment, unless we agreed to go down the donor egg route.

Mrs O’Brien and her husband made an appointment with Dr Phil Boyle who specialises in restorative reproductive medicine at Neo Fertility Clinic.

Dr Boyle assessed the couple’s existing test results and told them to buy Proceive Max Women and Proceive Max Men over the counter.

The supplement is designed to meet the nutritional needs of couples when trying to conceive.

The couple were educated in how to track Mrs O’Brien’s cycles, advised what diets to follow and what exercise to take.

Dr Boyle said: ‘With over 30 tailored vitamins and minerals that have been specially chosen to support both the female and male reproductive systems, Proceive is the most comprehensive and specialised formulation I have come across in my 20 plus years as a fertility specialist.’

Around 31 per cent of couples who had previously had been through unsuccessful IVF had at last had baby after using Proceive, according to 403 couples assessed by Dr Boyle and colleagues from the International Institute for Restorative Reproductive Medicine.

Proceive contains a blend of 33 ingredients, including amino acids, vitamins and minerals.

Its manufacturers claim this combination provides the optimal conditions for successful conception. Proceive for men contains selenium, which has been shown to improve sperm motility in men.

Scientific data from more than 600 studies was used for fertility experts to agree on the blend of compounds.

However, no scientific trials have ever been conducted on Proceive itself, meaning its effects are not yet to be confirmed.

Although, its creators are adamant scores of couples have got in contact with them about having children after trying the supplement.

The supplements, which cost £24.95 for 30 sachets, can be bought online, and are also sold in Holland & Barrett. 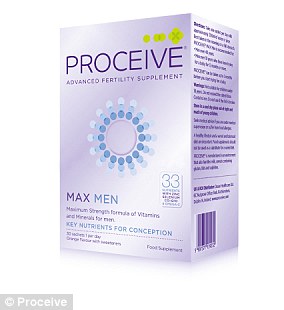 Proceive contains a blend of 33 ingredients, including amino acids, vitamins and minerals. Its manufacturers claim this combination provides the optimal conditions for successful conception

Dr Phil Boyle, director of Neo Fertility Clinic, Dublin, and president of the International Institute for Restorative Reproductive Medicine, said: ‘When couples come to my clinic, they may have been trying to conceive for months, even years.

‘Whilst they may have made positive changes to their lifestyles such as quitting smoking or losing weight, they can neglect to change their diet.

‘Even those who eat a healthy and balanced diet, may require additional nutritional support as they may, unknowingly, be missing out on some of the key vitamins and minerals that are essential for pregnancy.

‘When trying for a baby, it’s important to remember that it may take longer than anticipated.

‘There are a number of factors that may affect your chances of conception, however supporting your diet with a comprehensive and specialised fertility supplement, is a positive step to take to help you successfully conceive.

‘With over 30 tailored vitamins and minerals that have been specially chosen to support both the female and male reproductive systems, Proceive is the most comprehensive and specialised formulation I have come across in my 20 plus years as a fertility specialist.’