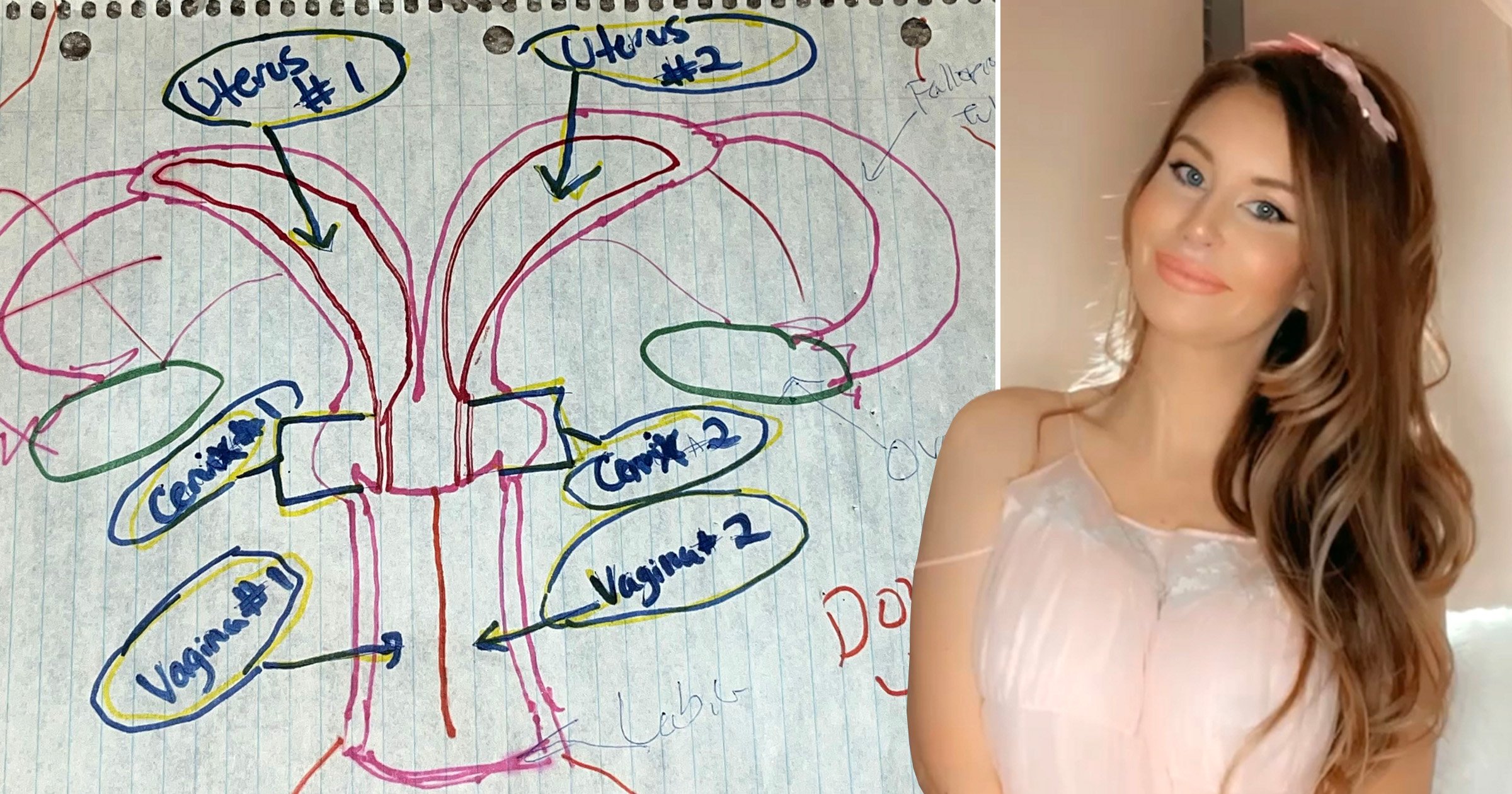 A woman with two vaginas has told of the difficulties she faces every month when she is menstruating, with her PMS pains and bleeding doubled.

When Leanne Bell went to the gynaecologist at age 28 for an IUD insertion, she was shocked when the doctor discovered she had two vaginas.

Not only did the model learn she had two vaginal openings separated by a septum, but learned she also had two reproductive systems.

Due to her two uteruses and two cervixes, Leanne, from Phoenix, Arizona, US, experiences debilitating periods, sometimes twice a month and has to use two tampons.

Leanne, now 37, says: ‘The first time I noticed something was different was when I started having my period.

‘I noticed that I would put a tampon in, and it would hit a wall, and sometimes it would go in sideways. It didn’t make sense to me.

‘Even today, I’ll pop a tampon in, and it will go off to the right side or left side. Now, I’ve learned to aim better and oddly enough I’ve just started to learn that two tampons work really well for me.

‘I am able to put one in each side comfortably. I do get two periods a month, but they normally happen at the same time, so I’ll need to wear two tampons.’

When her two periods happen together, Leanne says it’s excruciatingly painful, and she has to spend two or three days in bed.

‘I feel they just waste my life away, honestly, so that’s one form of hell,’ she says. ‘And then when they happen at a different time, it’s like three months of bleeding. It’s like I’ve just got done with a period and then five days later another one will start.’

Before being diagnosed with uterus didelphys in 2013, Leanne had seen five doctors who had performed full pap smears but missed her vaginal septum.

Leanne does not wish to remove the septum, saying that it is ‘part of her’ and is what makes her ‘special’.

‘When my doctor came in and tried to fit the IUD in, she had the funniest reaction. She said, “I don’t know how to tell you this, but I think you have another vagina”. From there we almost immediately went to go get an ultrasound and the ultrasound confirmed it.

‘That day they weren’t able to place the IUD because I can’t have one in both uteruses.

‘I had seen five other doctors before this. I think the other doctors missed it because, once you find one vagina, I don’t think you usually go looking for another. So, I don’t blame the doctors too much. For me, I guess I don’t see a reason to remove it.

‘I do feel a little special. Everyone wants something special about them. Ideally, it could have been something other than my vagina. But I do feel special.’

Leanne, who is a nude model, has since taken to Only Fans as only the second model with this condition, and is now earning over £1,200 a day and is projected to earn around £34,000 for April.

‘I actually make a good amount of money because of the double vagina pull in that I get,’ she explains. ‘Men and women alike seem to be fascinated with this rare anomaly.

‘Surprisingly, about 40% of my supporters are female, so I think everyone is at least a little bit curious as to what it looks like. And in an odd way, it feels good to be able to satisfy what I think is “completely normal” human curiosity – however shocking that may sound.

‘I thought I would get torn apart but for the most part but people are saying that I’m being brave and thanking me for opening up.’