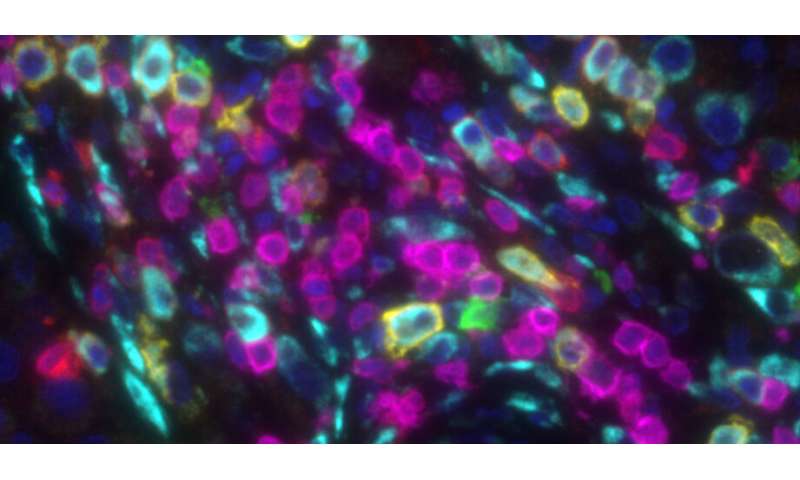 Researchers at EMBL’s European Bioinformatics Institute and the Medical University of Vienna have found evidence that B cells might play an important role in immunotherapy for melanoma. Currently, immunotherapy is primarily focused on T cells, but the results suggest that B cells could also provide an interesting research avenue.

Immunotherapy is a form of cancer treatment that uses the body’s own immune system to recognize and fight the disease. It comes in a variety of forms, including cancer vaccines, targeted antibodies or tumor-infecting viruses. Only some cancer patients currently benefit from this kind of therapy.

In the case of melanoma, which is a particularly aggressive form of skin cancer, established immunotherapies focus on T cells. T cells play an important role in controlling and shaping the immune system and they are able to directly kill cancer cells, while also recruiting other cells into the process.

A recent study published in Nature Communications has shown that, alongside T cells, B cells play a critical role in triggering melanoma-associated inflammation. B cells are a type of white blood cell, which can produce antibodies along with several important messenger molecules. The researchers found that, in the case of melanoma, B cells act almost like a satnav, directing T cells to the tumor via the secretion of such distinct messenger molecules.

“Immunotherapy has transformed cancer treatment,” explains Johannes Griss, Researcher at the Medical University of Vienna and EMBL-EBI. “It unleashes T cells so they can fight cancer in a more effective way. For the first time, we found that B cells also play an important part in the process and help T cells find the tumor. The role of B cells in immunotherapy is still largely unknown, but it seems they may have more impact than previously thought.”

During the study, the researchers observed that when B cells were depleted from melanoma patients, the number of T cells and other immune cells dramatically decreased within the tumors as well. In subsequent experiments, the researchers showed that a special subtype of B cells seems to be responsible for guiding T cells and other immune cells to the tumor.

Interestingly, melanoma cells seem to force B cells to develop into this distinct B cell subtype. Most excitingly, this specific B cell subtype also increased the activating effect of current immune therapies on T cells, and higher numbers of this B cell subtype in tumors before therapy predicted that a patient would respond better to subsequent immunotherapy.