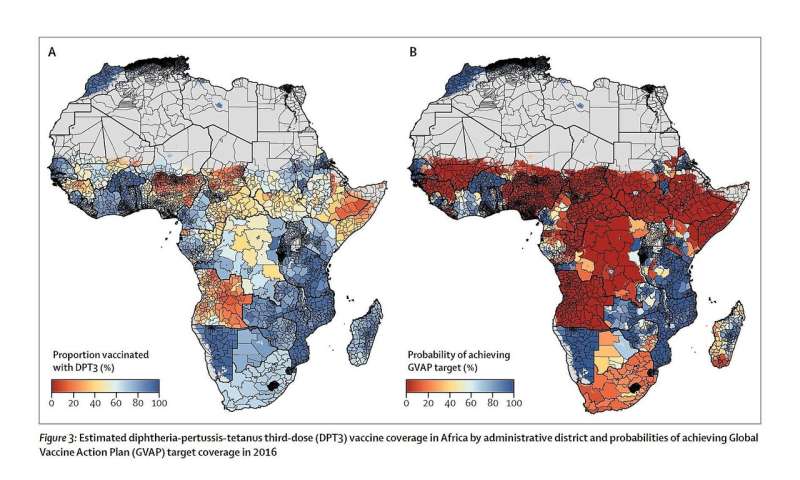 Many African nations have made substantial progress in vaccinating children against life-threatening diseases, however, within countries wide discrepancies remain, according to a new scientific study.

The proportion of children receiving the full infant series of three vaccinations against diphtheria, pertussis and tetanus (DPT3) increased in almost three quarters of districts in Africa between 2000 and 2016. In 29 of 52 nations studied, however, coverage with DPT3 varied by more than 25% at the district level, highlighting substantial variation within countries.

The study, funded by the Bill & Melinda Gates Foundation and conducted by the Institute for Health Metrics and Evaluation at the University of Washington, was published in the international medical journal The Lancet.

“Despite substantial gains in coverage, progress was far from universal,” said Dr. Jonathan Mosser, the lead author on the study. “Routine childhood vaccinations are among the most successful and cost-effective public health interventions, substantially contributing to children living beyond their fifth birthdays. We continue to see wide areas of low coverage at the local level, however, illustrating that targeted improvements are needed to ensure that all children have access to lifesaving immunizations.”

Using data from nearly 900,000 children, this analysis provides the first annual estimates of childhood DPT3 coverage across the entire African continent. It measures each community against the Global Vaccine Action Plan benchmark of reaching 90% national coverage and 80% in every district. These goals were established in 2012 by WHO member nations, as well as other organizations, including UNICEF, the Gates Foundation, and Gavi, the Vaccine Alliance, a public-private health partnership committed to increasing access to immunizations in poor countries.

Of the 52 countries studied, only Morocco and Rwanda are estimated to have already met the district-level goal of 80% coverage. In contrast, on the local level, areas of DPT3 coverage at or below 25% were found in several countries, including Nigeria, Chad, Ethiopia, Somalia, and Angola. Moreover, dropout rates exceeding 25% were identified in portions of Nigeria, Angola, Chad, Mali, Guinea, Liberia, Equatorial Guinea, Central African Republic, South Africa, Somalia, and Ethiopia.

“National estimates can mask subnational pockets of low coverage, leaving children in at risk for preventable diseases and death,” Mosser said. “Our study offers insights for nations’ health ministers and other decision makers to better understand local patterns of vaccine coverage and to identify where to improve vaccine delivery systems.”

An official with the Gates Foundation underscored the value of the study and its geospatial mapping techniques.