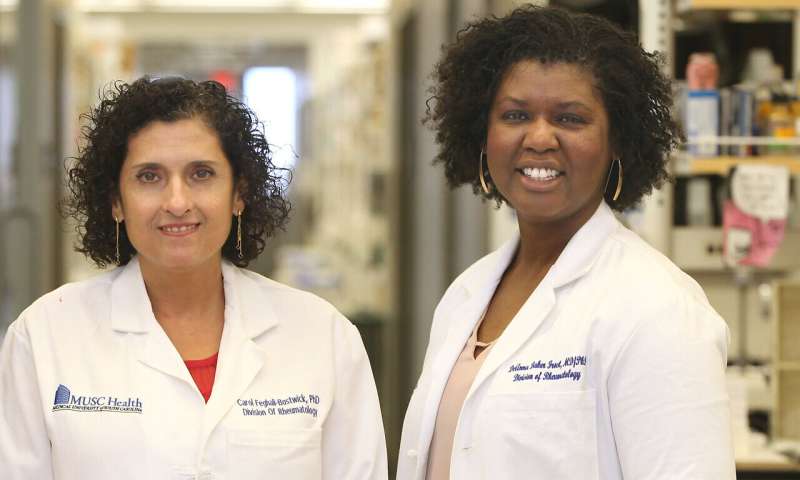 Estrogen is the quintessentially female hormone.

It is surprising, then, that a Medical University of South Carolina (MUSC) study found that a type of estrogen, estradiol, was more abundant in older men with scleroderma than in postmenopausal women with the disease. The MUSC team reports the findings of their National Institutes of Health (NIH)-funded study in Arthritis Research & Therapy.

In scleroderma, the body makes too much connective tissue. This causes thickening of the skin and internal organs and, ultimately, organ damage. Women are three times more likely, and women in their child-bearing years nine times more likely, to have the disease than men. Men, however, have more severe disease.

Scleroderma develops in women during their child-bearing years, when estrogen levels are at their highest. This has led researchers to speculate that estrogen may play a role in the disease, as well as other autoimmune diseases.

Further fueling that speculation were findings from hormone replacement therapy trials that women’s skin thickened during therapy and then returned to normal after completion of treatment.

Carol Feghali-Bostwick, Ph.D., the SmartState and Kitty Trask Holt Endowed Chair for Scleroderma Research at MUSC and senior author of the article, has previously reported that similar thickening occurred in skin cultures exposed to estradiol.

The MUSC team’s recent findings provide some of the first evidence to confirm a link between high estrogen levels and the development of scleroderma. They also begin to explain why men, in whom the disease is less frequent, often have more severe symptoms.

“It seems reasonable to say that estradiol is probably one of the reasons why men have more severe disease,” said Feghali-Bostwick.

“We always understood that women were more predisposed to getting autoimmune diseases,” said DeAnna Baker Frost, M.D., Ph.D., an MUSC Health rheumatologist, a KL2 scholar, and first author of the article.

“We always thought that estrogen played a role, but we needed additional research to identify associations between elevated estrogen levels and clinical aspects of scleroderma. And so it was exciting to see that estrogen likely is playing a role in disease outcomes or maybe the development of autoimmune diseases.”

Feghali-Bostwick had previously shown that postmenopausal women with scleroderma have elevated estradiol levels. To see if these levels were also high in men of the same age, she and Baker Frost turned to serum samples banked at the University of Pittsburgh Scleroderma Center. Feghali-Bostwick co-directed that center before joining MUSC.

The team tested estradiol and scleroderma autoantibody levels in banked samples from 83 men aged 50 years and older with diffuse cutaneous systemic sclerosis, a type of scleroderma. They also tested samples from 37 healthy men of a similar age. They then used a variety of statistical approaches and the careful clinical annotations accompanying each sample to determine whether estradiol levels were linked to any of the clinical traits of scleroderma.

But how is it possible for men to have such high levels of a hormone associated with the female reproductive system?

“Men can convert their testosterone to estrogen via an enzyme called aromatase,” explained Feghali-Bostwick.

“They’re converting testosterone in their tissues. You don’t to have to have ovaries to make estrogen. Other tissues can also form estrogen.”

Aromatase can convert other tissues such as fat into estrogen in women as well. Preventing that conversion could be a novel therapeutic approach to scleroderma.

Aromatase inhibitors are already being used to treat women, particularly postmenopausal women, with hormone-receptor positive breast cancer. The MUSC team would like to conduct a small trial to assess the efficacy of aromatase inhibitors in patients with scleroderma.

“What happened to their scleroderma when they were treated with aromatase inhibitors?” asked Feghali-Bostwick.

“Knowing that would help inform us about the utility of aromatase inhibitors. It’s hard to access the large breast cancer study data. However, doing so would provide us key information in assessing whether aromatase inhibitors have a role in scleroderma.”

“I think we also have to show concretely that having high estrogen levels is the causative factor for the clinical characteristics of scleroderma,” said Baker Frost.

“So we’re doing a lot of studies with human tissues, and soon tissues from scleroderma patients, to show that if we treat these cells and tissues with estrogen, then the downstream effects will be the high levels of tissue scarring that you see with scleroderma.”

The MUSC’s team findings also point to estrogen as a potential environmental trigger for scleroderma. Most people who develop the disease are likely genetically susceptible. However, research suggests that the environment also plays a role.”Estrogen is around us. It’s not just what your body produces,” explained Feghali-Bostwick.