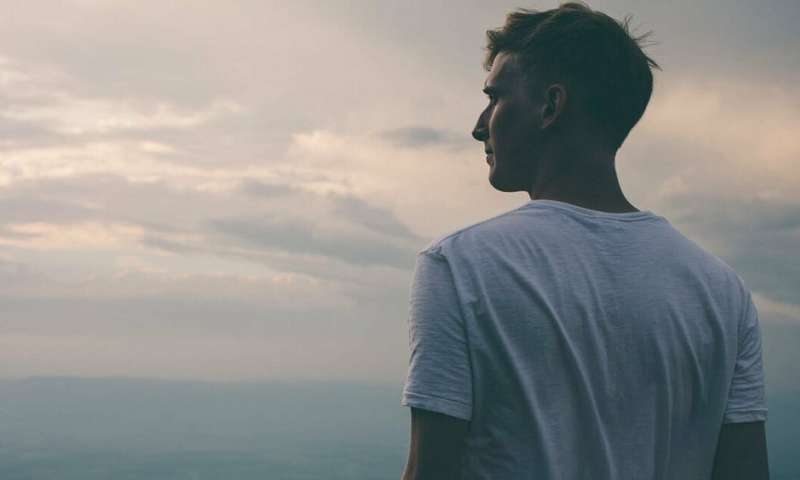 A man sits in a doctor’s office after months of his wife’s increasingly desperate pleas for him to seek professional help for his constant coughing. In the end, she was the one who booked his appointment and even drove him there.

Another man is meeting with his manager, anticipating derision and mockery when he mentions he needs to reduce his workload to accommodate the birth of his first child.

A third man has a violent encounter outside a pub, fuelled by binge drinking and machismo. He cops a blow to the head and crumples, hitting his head against the pavement.

These aren’t just stereotypes of men. They are the types of experiences and outcomes that reliably differ between men and women. Men are 32% less likely to visit a health professional than women. Men are also less likely to seek therapy for psychological complaints, such as feeling down or anxious.

Men also experience higher rates of suicide and motor accidents, are more likely to drink excessively and smoke, and are more prone to serious health conditions such as heart attacks, strokes, and vascular disease.

Similarly, men are more likely to both perpetrate and experience violence, and to adopt beliefs and behaviours that increase the risk of violence.

In a bid to improve men’s health and well-being, the American Psychological Association (APA) recently released guidelines for psychologists when working with boys and men.

These guidelines complement the APA’s 2007 guidelines for working with girls and women. Both guidelines share commonalities, such as focusing on gender-appropriate therapeutic practices and education.

The APA is acknowledging that gender issues are relevant to everyone, not just women, and that the experiences of men may differ to those of women.

But despite the positive intentions of the guidelines, their release was met by backlash and unfounded criticisms in some parts of the media.

What do the guidelines actually say?

The guidelines aim to challenge some aspects of traditional masculinity that might cause problems in men’s lives.

Traditional masculinity encompasses a set of norms, ideas and beliefs about what it means to be a man. Such beliefs include identifying men as self-reliant, emotionally reticent, focused on work over family, and oversexed.

When these beliefs are taken to an extreme level, they can result in poor outcomes for men, such as being dissatisfied in romantic relationships, having mental health problems, and engaging in more risky behaviours.

To illustrate the impact of these traditional ideas of masculinity on men’s health and well-being, let’s look at three of the ten APA recommendations in detail.

First, the guidelines urge psychologists to address the high rates of problems like violence, substance abuse, and suicide, which are more commonly experienced by men.

The guidelines highlight the link between beliefs about traditional forms of masculinity and the encouragement of aggressive behaviour in boys by family, peers and the media. As a result, men are more likely to display violent behaviours and to be victims of violence.

Recognising these patterns offers an opportunity for therapists to engage in gender-appropriate conversations and tailor behavioural change to the problems that plague men.

Second, the guidelines highlight the importance of encouraging men’s positive involvement in families.

Despite increasing numbers of dual-income households, there is still strong social pressure for men to be the providers and breadwinners rather than taking on nurturing and caring roles. This expectation can come at the expense of men’s relationships with their partners, children and extended family.

Encouraging men’s positive involvement with their families has been shown to improve health and well-being outcomes for men, their children and their partners.

It may have spillover benefits in making work practices more progressive, with better balance between paid work and time spent with loved ones.

Third, the guidelines highlight the need for boys and men to more willingly seek help and health care.

Men are more likely than women to die from diseases such as colorectal cancer, which can be prevented with the right health care.

In terms of mental health, men’s reluctance to express emotions and seek help through therapy may underlie the high rates of self-harm and suicide.

Traditional masculinity also encourages risky and competitive actions in men, resulting in unintentional injuries being the leading cause of death in men under 45.

According to the guidelines, we need to shift beliefs around self-reliance so men feel more comfortable looking after themselves and seeking professional help and services when needed.

Taken together, the APA guidelines have the potential to improve the lives of men. The guidelines squarely focus on the disparities in outcomes between men and women, and provide clear suggestions on improving men’s well-being through strategies like strengthening family engagement and changing attitudes towards embracing healthy behaviours.

Many non-profit organisations and advocacy groups are already taking on this challenge to encourage healthy masculinity among boys and men. Our Watch, Australia’s national foundation to prevent violence against women and their children, for instance, provides resources and articles for young people on masculinity and what it means to be a man through their campaign, The Line.