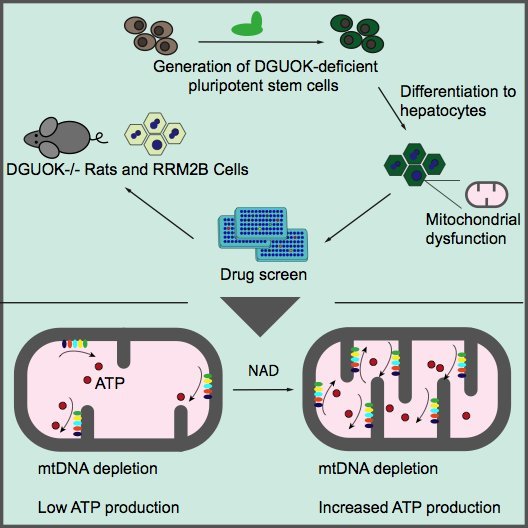 Mitochondria are responsible for supplying the cell with energy in the form of ATP through oxidative phosphorylation. There is a group of rare, autosomal recessive disorders, known as Mitochondrial DNA Depletion Syndromes (MTDPS), which causes a significant reduction in mitochondrial DNA (mtDNA) and ATP production. There is no treatment for MTDPS, and it is typically fatal during infancy as a result of liver failure. Researchers at the Medical University of South Carolina (MUSC) have identified several drug candidates for the treatment of MTDPS. Their results, published online in the November 6, 2018 issue of Cell Reports, showed that nicotinamide adenine dinucleotide (NAD) significantly restored mitochondrial function in vitro as well as in preclinical animal models.

MTDPS has recently received international attention after an infant, Charlie Gard, became the subject of a ‘best interests’ case in the UK, drawing criticism from world leaders including Pope Francis and President Trump. Doctors determined that Gard had a mutation in ribonucleoside-diphosphate reductase subunit M2 B (RRM2B), a protein critical for generating the building blocks of mtDNA and one of several causes of MTDPS. Unfortunately, with no cure or treatment available, Gard passed away in July 2017, after battling MTDPS for 11 months, 24 days.

“We realized that there really is no treatment for these diseases. So we thought that we could start to use our stem cell model systems to try and find drugs or therapeutics” says Stephen A. Duncan, D. Phil., SmartState Chair of Regenerative Medicine at MUSC and senior author on this study.

The discovery of new treatments has been hampered by the lack of a model that fully mimics the pathology of MTDPS. Furthermore, primary liver cells from patients are difficult to obtain and to work with. To solve this problem, Duncan and his team used CRISPR/Cas9 to deplete deoxyguanosine kinase (DGUOK) in human induced pluripotent stem cells. Then, using protocols established in the Duncan laboratory, they differentiated those knock-out cells into liver-like cells.

The most common MTDPS, representing 15—30 percent of cases, results from the loss of DGUOK. In patients, the loss of DGUOK reduces the pools of precursor molecules needed to synthesize mtDNA, resulting in low mtDNA levels and diminished ATP levels. The DGUOK-deficient cells similarly exhibited a reduction in mtDNA levels, loss of ATP production and a disorganized mitochondrial morphology. These phenotypes could be reversed by the addition of precursors for mtDNA synthesis as well as re-expression of DGUOK.

“Having recapitulated this disease, the next question was can we find drugs that can reverse it,” says Duncan.

The next stage of this study utilized a library of drugs that are currently available on the market, to perform a phenotypic screen for drugs that could restore ATP levels. The screen identified 15 drugs, impacting a variety of metabolic processes, which significantly increased ATP levels. Unexpectedly, the drug with the greatest impact on ATP production was nicotinamide adenine dinucleotide (NAD), a coenzyme that impacts several pathways. The researchers went on to show that NAD functions through the activation of a transcription cascade that results in increased expression of mitochondrial proteins involved in ATP production.

“Because the iPSC-derived hepatocytes enabled us to perform an unbiased, phenotypic screen, we were able to identify unanticipated drugs like NAD,” says Ran Jing, Ph.D., first author and graduate student in the Duncan lab, who is now a postdoctoral fellow at Harvard Medical School.

To complete their studies, the researchers validated their findings using DGUOK-deficient rats. These animals do not succumb to disease; however their livers are still affected and show diminished ATP production. In animal models, NAD exhibits poor bioavailability, so researchers utilized the NAD precursor nicotinamide riboside (NR). Treating DGUOK-deficient rats that exhibit disease symptoms with NR partially restored their ATP levels when compared to wild-type rats. This finding has significant implications for clinically treating MTDPS patients.

“It’s not that you need to treat during development, you should be able to treat patients after the phenotype has developed and reverse it, rather than just preventing it,” explains Duncan.

To broaden the scope of these findings to other forms of MTDPS, the Duncan lab also generated RRM2B-deficient liver-like cells, the same mutation that lead to MTDPS in Charlie Gard. These cells exhibited reduced mtDNA and ATP levels, albeit not as drastically as DGUOK-deficient cells. Despite this, addition of NAD restored ATP levels in RRM2B-deficient cells, showing that NAD may provide a treatment for multiple forms of MTDPS.

The powerful phenotypic screen conducted in this study identified multiple drugs that increased ATP production. To further restore mitochondrial function, the researchers treated DGUOK-deficient cells with a combination of NAD and trimipramine, a drug used to treat depression, and found that ATP levels were further increased, exceeding levels observed in WT cells. Follow-up studies using other drug combinations may further refine the best course of treatment for MTDPS.