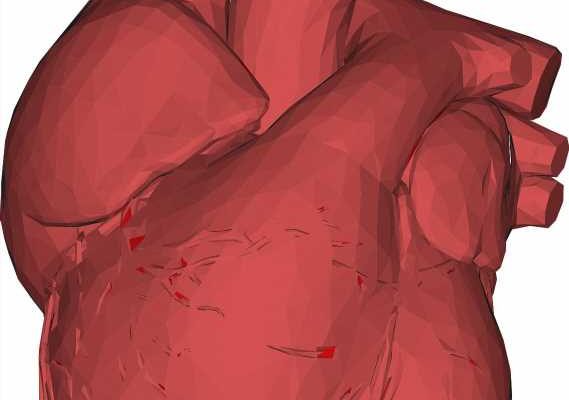 Results were released today from the first two clinical studies designed specifically to examine the effects of the heart drug sacubitril/valsartan on the structure and function of the failing heart. Treatment with sacubitril/valsartan, a combination angiotensin receptor-neprilysin inhibitor (ARNI), substantially lowers rates of death and hospitalization in certain types of heart failure patients. However, the mechanisms by which the drug actually affects the heart are poorly understood.

These two new studies suggest a key effect of ARNI is to reverse cardiac remodeling—a finding that could lead to better management of this condition. One of the studies, called PROVE-HF, was led by James L. Januzzi, MD, a physician in the Division of Cardiology at Massachusetts General Hospital (MGH). The other study, called EVALUATE-HF, was led by Akshay S. Desai, MD, director of Cardiomyopathy and Heart Failure in the Cardiovascular Division at Brigham and Women’s Hospital. Both studies were published online this morning in the Journal of the American Medical Association and presented today at the European Society of Cardiology Scientific Sessions in Paris, France. Scott Solomon, MD, director of Noninvasive Cardiology and senior physician at Brigham and Women’s Hospital, helped to lead both studies, and is a co-author on both reports.

In heart failure, progressive cardiac remodeling leads to changes in the shape and size of the heart, contributing to weakened heart function and progressive symptoms such as shortness of breath, reduced exercise capacity, and fluid retention. The researchers found that treatment with ARNI was associated with significant improvements in cardiac structure and function and that these changes were strongly associated with reductions in blood levels of the biomarker amino-terminal-pro-B-type natriuretic peptide (NT-proBNP). Levels of NT-proBNP levels are tightly linked to the risk of death and heart failure hospitalization.

“In remodeling, the heart gets larger and stiffer, making it more difficult for it to pump,” says Januzzi. “Reversing remodeling can reduce those effects and lead to better function.”

The PROVE-HF trial was a prospective, single arm study of nearly 800 patients with heart failure and reduced ejection fraction who were over the age of 65 and had just started on ARNI. Patients were followed for one year and monitored serially with blood tests to measure cardiac biomarkers and echocardiography to assess cardiac structure and function. Treatment with ARNI rapidly and significantly lowered levels of NT-proBNP at one year, and this reduction in levels of the biomarker was strongly associated with improvements in cardiac structure and function at both six months and one year.

Ejection fraction is an important measure of the heart’s ability to pump blood. When the study started, the mean ejection fraction among the participants was just 28%: In healthy individuals that number is usually above 50%. After patients started the drug their ejection fraction levels rose by an average of 9.5% per quarter, with 25% patients seeing dramatic increases of 13% or more. “An overwhelming number of patients showed improvement, and some people were all the way back to a normal ejection fraction level by the end of study,” says Januzzi.

An important observation of the PROVE-HF study was that ARNI appeared to benefit patients that had not been studied in previous trials of the drug, including those with relatively new-onset heart failure, those with lower concentrations of NT-proBNP, and those who could not tolerate higher doses of the medication. Safety and tolerability of ARNI at one year were also consistent with the findings of the PARADIGM-HF trial, which led to initial FDA approval of the drug. “Our results suggest that ARNI therapy would be expected to benefit a wide range of patients suffering from heart failure with reduced ejection fraction,” Januzzi says.

Changes in cardiac structure and function may also be closely related to progressive stiffening of the aorta, which increases the load on the failing heart and may stimulate further cardiac remodeling. The second study, EVALUATE-HF, was designed as a prospective, randomized comparison of the effects of ARNI versus enalapril (a cornerstone of heart failure treatment) on aortic stiffness and cardiac structure and function in patients with heart failure and reduced ejection fraction.

This study randomly allocated 464 patients with chronic heart failure, reduced ejection fraction, and history of high blood pressure to treatment with ARNI or enalapril and followed them for a period of 12 weeks with periodic assessment of arterial stiffness, cardiac structure and function, cardiac biomarkers, and quality of life. At 12 weeks, no difference was noted between the two treatments with regard to change in aortic impedance—a measure of aortic stiffness. However, consistent with PROVE-HF’s findings, significant reductions were seen with ARNI in secondary measures of cardiac structure and function. In this study, improvements in remodeling were also correlated to reductions in NT-proBNP and improvements in quality of life.

Overall, the EVALUATE-HF data suggest that the clinical benefits of ARNI are likely unrelated to changes in central aortic stiffness, but might be related to favorable early effects of neprilysin inhibition (one of the primary effects of ARNI) on myocardial remodeling.